With the 2020 presidential election just ahead amid a pandemic and mail delays at the U.S. Postal Service, experts say voting early is the key to making sure your ballot is counted.

“If voters have any doubt about mail voting or are worried about them getting their ballot in on time, or are unfamiliar with the process, they should absolutely try to vote in person — perhaps early,” said David Becker, founder of the Center for Election Innovation and Research. “That’s the best way to do it, as they can in many states.” 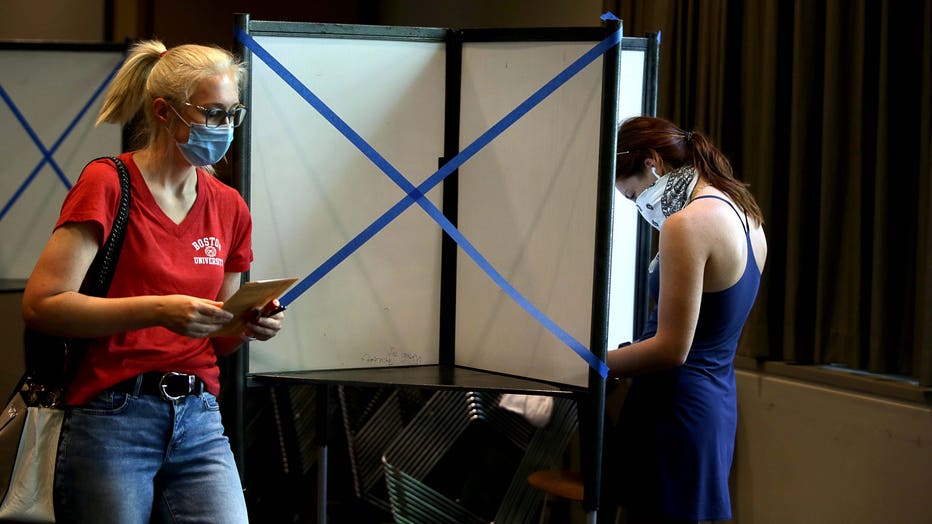 A woman fills out her ballot during early voting at the Honan-Allston Branch Library on Aug. 25. 2020, before the September 1 Primary Election, in Boston, Massachusetts. (Photo by Jonathan Wiggs/The Boston Globe via Getty Images)

Forty states and the District of Columbia offer some form of in-person early voting, according to the nonprofit, bipartisan voting information site Vote.org.

Casting your ballot early in person comes with a number of perks, including the ability to avoid crowds and long lines on Election Day. You also don’t need an excuse to vote early.

States like Maryland, New York and Ohio even allow some early voting on weekends.

Voters can get specific information about early in-person voting dates and ID requirements for where they live by visiting this link and selecting their state and county. The NCSL also compiles a list of time frames for early voting by state.

RELATED: How to cast your ballot without using USPS ahead of the 2020 election

Of course, going in-person to the polls during the current COVID-19 outbreak comes with its own risks. But election officials across the country are taking precautions to keep the process as safe as possible, including social distancing measures and mask requirements.

A group of professional sports franchises from the NBA, MLB, NFL and NHL have even offered up their venues to voters in an effort to reduce lines, wait-times and other potential obstacles to casting ballots in the election.

A majority of Americans in 2020 say they favor the option to vote early, too — which has become an increasingly popular method in recent years.

Pew Research found that about two-thirds (65%) say the option to vote early or absentee should be available to any voter without requiring an excuse. The number of voters who have chosen to vote early in-person has also increased from 8% in 2004 to 17% in 2016, according to the US Election Assistance Commission.

“My biggest advice to everyone is whatever you’re going to do, whether you’re voting by mail, whether you’re voting in person, do it early,” said Commissioner Ellen L. Weintraub of the Federal Election Commission. “That way you will know that you got there and it will likely be less crowded if you’re doing it in person, and you can get your vote in and know that it will be counted.”

RELATED: Will we have results on election night? FEC commissioner says prepare to wait