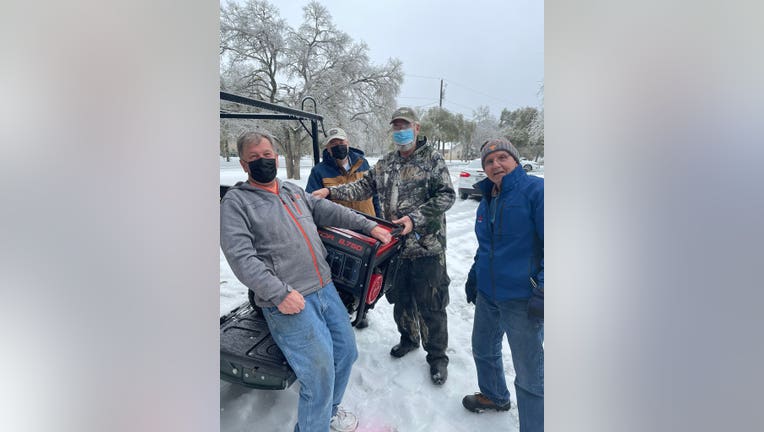 Facility Director Shannan Conway said "we want to thank our community, they have been calling us, texting us, emailing us… We couldn’t ask for a better community here in Williamson County."

GEORGETOWN, Texas - Tuesday, FOX 7 Austin reported that Platinum Resort Assisted Living and Memory Care in Georgetown, Texas was in need of a second-generator to provide light for it’s 13 residents and staff.

Wednesday, Georgetown business "Russell Glass" was able to donate the generator. Mickey McLaughlin and Sheridan Young dropped it off just after noon.

Facility Director Shannan Conway said "we want to thank our community, they have been calling us, texting us, emailing us… We couldn’t ask for a better community here in Williamson County."

A Georgetown assisted living facility lost power. Power sporadically returned, but the 13 resident home spent most of Monday and Tuesday without it.&nbsp;&nbsp;

Conway told FOX 7 Austin the facility even received calls from people out of state looking to help. Adding that Thomas, Sophie and Kathy Young donated water, and Zac Lovas ordered 21 blanket sets for staff who have been at the facility 24/7 since the storm hit.

"It’s very warm in here, very cozy, and thanks to the public for everything they’ve done to help out in this situation," said Marie Knight, whose father Charles Faubion lives at the facility.

Around 4 a.m. Monday Platinum Resort Assisted Living and Memory Care lost power. Power sporadically returned, but the 13 resident home spent most of Monday and Tuesday without it.

"[The weather has] been good to see, but it’s cold, it’s rough." said resident Imogene Davis.

The facility had one generator they were using to power three space heaters and a griddle. "That doesn’t take place of the heater," said resident Charles Faubion.

Facility Director, Shannan Conway says staff is trying to "keep everybody in the center of the house where it’s warm." Each resident is situated near a heater with a shirt, sweatshirt, sweater and blankets.

Growing safety concerns as many still without power

People across Central Texas are waking up to find their power still out and concerns over safety are growing. FOX 7 Austin's John Krinjak has more.

Staff have not left the facility since the severe weather hit. Facility Owner, Laura Chotkevys says they are working to keep everyone calm. "Individuals who have dementia, they sense energy, so I think that’s what we’re very cognizant of," she explained.

In the meantime, Conway says she would appreciate a timeline. "We’d love to know what to tell the residents." she said.