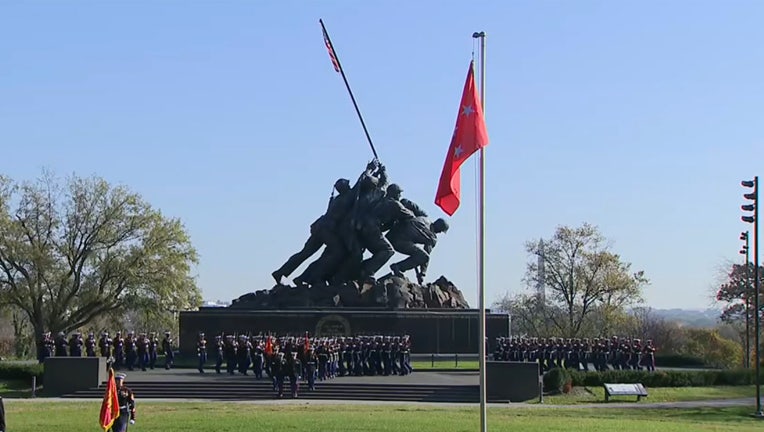 VIRGINIA - The United States Marine Corps celebrated their 247 years in existence Thursday with the annual wreath-laying ceremony at the U.S. Marine Corps Memorial in Arlington, Virginia.

The statue memorializes the six men who raised the American flag at Iwo Jima during World War II.

Gen. David Berger, the commandant of the Marine Corps, said the day is about commemorating all Marines "who came before us."

"We celebrate all of the Marines who have yet to come, and we remain semper fidelis, always faithful, to the Marines who currently stand the watch around the globe today. And while we often associate the Marine Corps birthday with balls, and fancy ceremonies, and cake cutting, in my opinion, the wreath laying -- one of the most important traditions that we have in our corps."

The ceremony also included a 21-gun salute and the playing of the Invincible Eagle by the United States Marine Band.

Back on Nov. 10, 1775, the Second Continental Congress met in Philadelphia and passed a resolution, stating "two Battalions of Marines be raised" for service as landing forces with the fleet. The resolution established the Continental Marines and marked the birth date of the United States Marine Corps. The first Marines severed on land and at sea, distinguishing themselves in a number of important operations, including their first amphibious raid into the Bahamas in March 1776.