After a two-year hiatus, Houston's Art Car Parade is back this weekend. We give you a sneak peek at a brand new car joining the fleet this year.

HOUSTON - A Houston tradition is back this weekend after a two-year hiatus fueled by the coronavirus pandemic – art cars.

The Art Car Parade Weekend runs from April 7-10, but the big event is Saturday’s parade that sees fantastic works of mobile art cruising through downtown.

Art cars are vehicles that are more than just tricked out. These cars are paintings, sculptures and mosaics all on wheels. Some are traditional and others are downright zany.

The Houston parade got its start in April 1988 when 2,000 people turned out to stare in amazement as 40 art cars traveled through the city. By the following year, the parade size doubled, and the crowd swelled to tens of thousands of people, according to thehoustonartcarparade.com.

Today, the parade features more than 250 vehicles from 23 states, including bicycles, unicycles, lawnmowers and go-carts. Entries from Canada and Mexico are also part of the modern-day parade. About 250,000 people attend the festival each year.

An art car is seen on Allen Parkway during the 26th Annual Houston Art Car Parade on May 11, 2013 in Houston, Texas.  (Scott Halleran/Getty Images)

The weather couldn’t be better for this year’s Art Car Parade. Sunny skies and springlike temperatures in the mid-70s to lower 80s are expected throughout most of the event. It'll be a bit breezy in the afternoons with winds between 5 and 15 mph and gusts up to 20 mph. 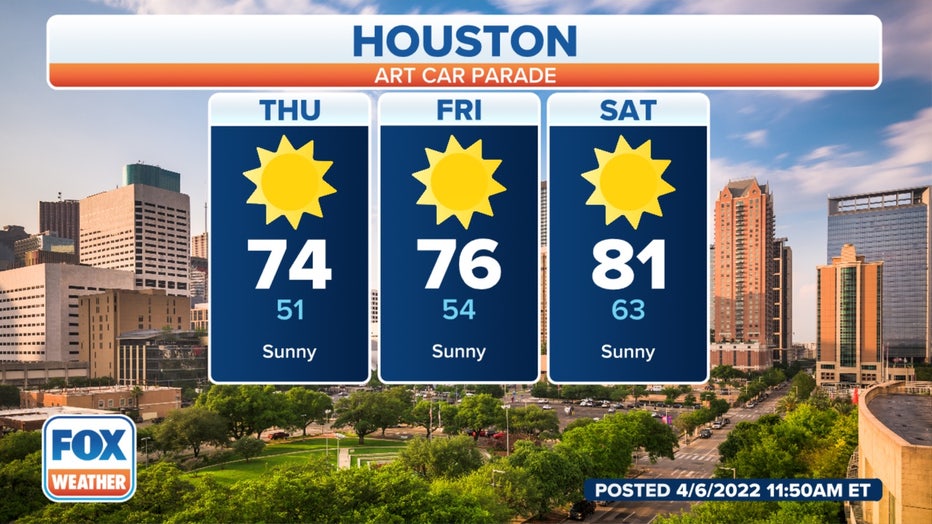