Out of 75 Lake Travis ISD bus driver positions, 39 of them are vacant.

LAKE TRAVIS, Texas - By most accounts, Tuesday was a successful first day of school at Lake Travis ISD.

But district officials and parents are less than happy about the ongoing shortage of bus drivers. Out of 75 positions, 39 of them are vacant, despite aggressive recruiting and bumping pay to $23/hour.

"Everybody’s short-staffed and I don’t know what the solution is," said Keely Cano, a parent at Lake Travis Elementary.

Barring a solution, the district has had to cut routes.

If you live in a two-mile radius of school, there’s no bus service at all. If you live outside that radius, it’s one week on, one week off. Special service routes are unaffected. Schedules can be found here. 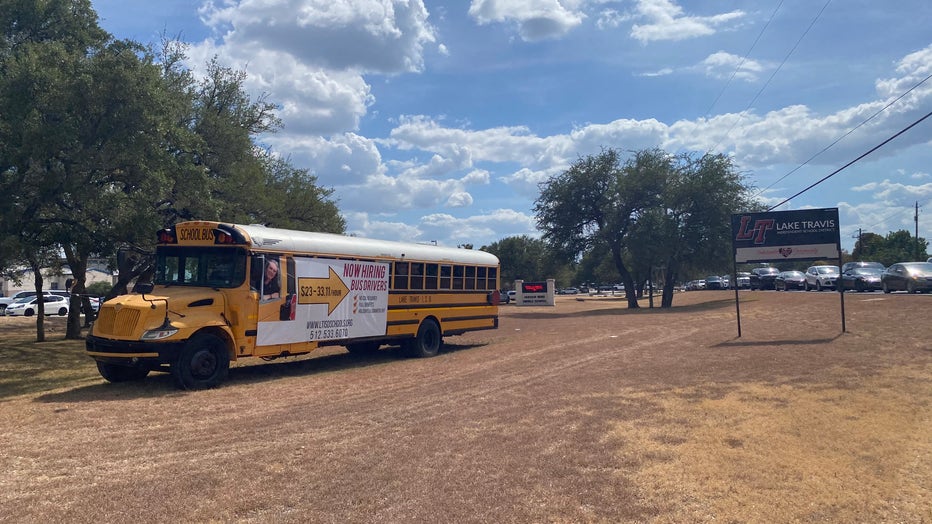 On this first day, the biggest impact of those changes was clear.

"It was more traffic obviously, because we didn’t have as many school buses transporting kids," said Bailey.

One mom, who didn’t want to be identified, says the bus shortage has forced her to make adjustments at work.

"Today I had to go in at 9 a.m. because I had to drop my child off from school. I had to leave work early today to pick him up on time," she said.

"We have a district Facebook link, and I’ve seen a lot of people put things out for different carpools in different neighborhoods," said Hart.

Lake Travis ISD said out of about 80 bus driver positions, the district only has about half that number on staff.

In Dripping Springs, Tuesday was also the first day of school. That district is down a dozen bus drivers, leading to so-called "no-service zones."

Some Dripping Springs families are finding themselves without a bus, despite living five miles away from school.

FOX 7 reached out to Dripping Springs ISD for comment, but did not hear back.

"We’re sorry this is happening. If we could change it we would," said Bailey.

Back at Lake Travis ISD, they’re beefing up police patrols and adding crossing guards, urging drivers to be patient and pay attention, and hoping you’ll consider a career behind the wheel.

"We’re going to train you, we’re going to do everything to get you on that bus and feel comfortable," said Bailey.

"I think you would be getting gifts every day and everybody would rally around you and greatly appreciate you," said Cano.

Bailey says the district has gotten a few bus driver applications in the past week, and the more they get, the more routes they’ll be able to add back. If you or someone you know is interested in applying, contact Lake Travis ISD Transportation at (512) 533-6070 or davisr@ltisdschools.org.