Graham held a news conference proposing an abortion bill that would prohibit the procedure after 15 weeks of pregnancy with rare exceptions.

WASHINGTON - Upending the political debate, Republican Sen. Lindsey Graham introduced a nationwide abortion ban bill Tuesday, sending shockwaves through both parties and igniting fresh debate on a fraught issue weeks before the midterm elections that will determine control of Congress.

Graham's own Republican party leaders did not immediately embrace his abortion ban bill, which would prohibit the procedure after 15 weeks of pregnancy with rare exceptions, and has almost no chance of becoming law in the Democratic-held Congress. Democrats torched it as extreme, an alarming signal of where "MAGA" Republicans are headed if they win control of the House and Senate in November.

"America’s got to make some decisions," Graham said at a press conference at the Capitol.

The South Carolina Republican said rather than shying away from the Supreme Court's ruling this summer overturning Roe vs. Wade's nearly 50-year right to abortion access, Republicans are preparing to fight to make a nationwide abortion ban federal law. 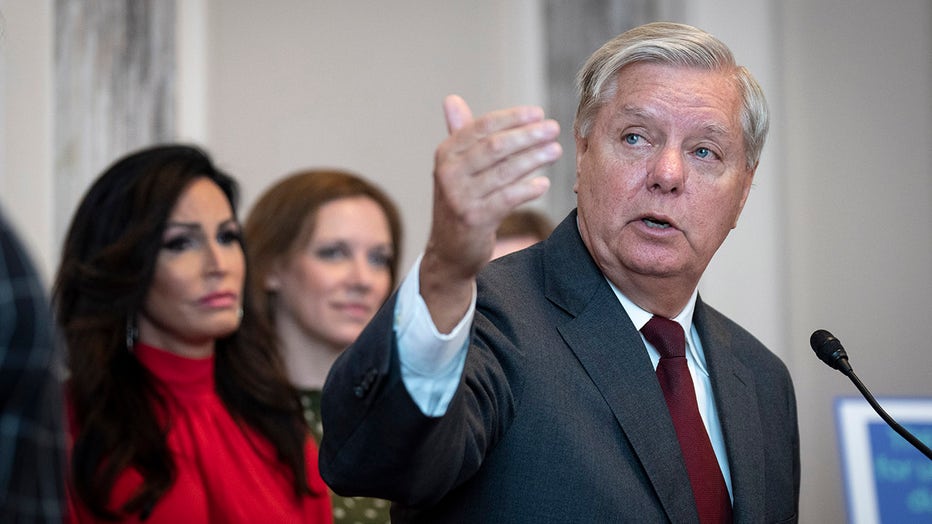 Reaction was swift, fierce and unwavering from Democrats who viewed Graham's legislation as an extreme example of the far-right's hold on the GOP, and as a political gift of self-inflicted pain for Republican candidates now having to answer questions about an abortion ban heading toward the midterm elections.

Sen. Patty Murray, a Democrat from Washington who is in her own fight for reelection, said Republicans "want to force" women to stay pregnant and deliver babies.

"To anyone who thought they were safe, here is the painful reality," she said. "Republicans are coming for your rights."

RELATED: State by state: Abortion laws across the U.S.

The sudden turn of events comes in a razor-tight election season as Republicans hoping to seize control of Congress are struggling to recapture momentum, particularly after the Supreme Court's landmark decision sparked deep concerns among some voters, with signs of women voters peeling away from the GOP.

In a midterm election where the party out of the White House traditionally holds an advantage, even more so this year with President Joe Biden's lackluster approval ratings, the Democrats have regained their own momentum pushing back the GOP candidates in House and Senate races.

Tuesday's announcement set up an immediate split screen with Biden and Democrats poised to celebrate their accomplishments in a ceremony at the White House after passage of the Inflation Reduction Act and Republicans forced to answer for Graham's proposed abortion ban.

"This bill is wildly out of step with what Americans believe," said White House press secretary Karine Jean-Pierre in a statement.

"While President Biden and Vice President Harris are focused on the historic passage of the Inflation Reduction Act to reduce the cost of prescription drugs, health care, and energy – and to take unprecedented action to address climate change – Republicans in Congress are focused on taking rights away from millions of women," Jean-Pierre said.

Graham's legislation has almost zero chance of becoming law, but it elevates the abortion issue at a time when other Republicans would prefer to focus on inflation, border security and Biden's leadership.

The Republican bill would ban abortions nationwide after 15 weeks of pregnancy, expect in cases of rape, incest or risks to the physical health of the mother. Graham said it would put the U.S. on par with many other countries in Europe and around the world. 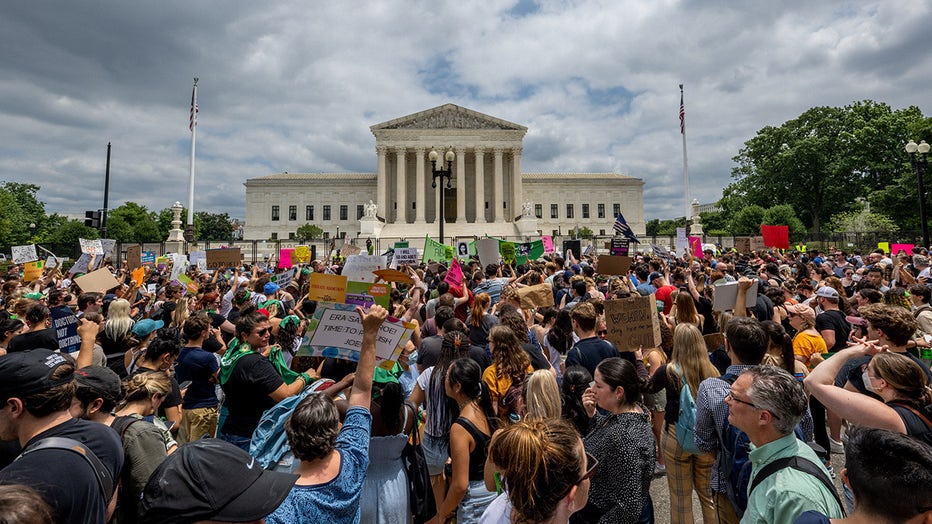 People protest in response to the Dobbs v Jackson Women's Health Organization ruling in front of the U.S. Supreme Court on June 24, 2022 in Washington, DC. (Photo by Brandon Bell/Getty Images)

In particular, Graham's bill would leave in place state laws that are more restrictive. That provision is notable because many Republicans have argued the Supreme Court's ruling leaves the abortion issue for the states to decide. But the legislation from the Republicans makes it clear states are only allowed to decide the issue if their abortion bans are more stringent.

Senate Republican leader Mitch McConnell, who is one seat away from majority control, declined to embrace Graham's legislation.

"I think every Republican senator running this year in these contested races has an answer as to how they feel about the issue," McConnell said. "So I leave it up to our candidates who are quite capable of handling this issue to determine for them what their response is."

The Democratic senators most at risk this fall and other Democratic candidates running for Congress appeared eager to fight against Graham's proposed nationwide abortion ban.

Sen. Catherine Cortez Masto, the Democrat from Nevada tweeted that Graham "and every other anti-choice extremist can take a hike."

Her Republican opponent, Adam Laxalt, has during his campaign insisted that abortion is protected in the state constitution, which it would no longer be under this bill.

In Colorado, another Democratic up for reelection, Sen. Michael Bennet, tweeted: "A nationwide abortion ban is outrageous. "

Bennet pledged "to defend a woman’s right to make her own health care decisions, no matter what ZIP code she lives in. We cannot afford to let the Republicans take back the Senate."

His opponent in Colorado, Republican Senate hopeful Joe O’Dea, who supports putting abortion access that had been guaranteed under Roe vs. Wade into law, agreed, in part: "A Republican ban is as reckless and tone deaf as is Joe Biden and Chuck Schumer’s hostility to considering any compromise on late term abortion, parental notification or conscience protections for religious hospitals."

The races for control of Congress are tight in the split 50-50 Senate where one seat determines majority control and the House, where Speaker Nancy Pelosi can afford to lose only a very few seats.

Pelosi called Graham's bill the "clearest signal of extreme MAGA Republicans’ intent to criminalize women’s health freedom in all 50 states and arrest doctors for providing basic care. Make no mistake: if Republicans get the chance, they will work to pass laws even more draconian than this bill."

Republican leaders on Capitol Hill tried to hold the party together amid the differences.

"I think that what it’s attempting to do is probably change the conversation a little bit," said Sen. John Thune, a Republican from South Dakota, and second-ranking party leader.

Associated Press writers Kevin Freking in Washington and Nick Riccardi in Denver contributed to this report.