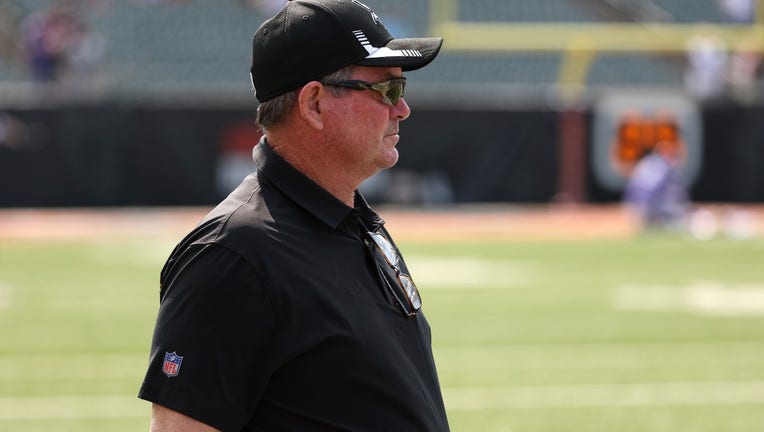 Head coach Mike Zimmer of the Minnesota Vikings looks on prior to the game against the Cincinnati Bengals at Paul Brown Stadium on September 12, 2021 in Cincinnati, Ohio. ((Photo by Dylan Buell/Getty Images))

MINNEAPOLIS - Minnesota Vikings head coach Mike Zimmer said Wednesday a player who has been vaccinated had to be taken to the emergency room Tuesday night due to COVID-19.

Zimmer, speaking at his weekly news conference, said that player is still in the hospital but is stable. Zimmer said he was told the player was having trouble breathing, and it was likely Covid-pneumonia. He did not identify who the player was.

Minnesota Vikings head coach Mike Zimmer said Wednesday a player who has been vaccinated had to be taken to the emergency room Tuesday night due to COVID-19.

"I’m not a doctor, but it was Covid pneumonia or something, he had a hard time breathing," Zimmer said.

The Vikings have had five players in the last week placed on the reserve/COVID-19 list. Harrison Smith reportedly tested positive Sunday morning, didn’t play against the Ravens and is out at least 10 days, meaning he won’t play this week against the L.A. Chargers either. Garrett Bradbury missed Sunday’s game, although he is vaccinated, because he couldn’t produce two negative tests before the team left for Baltimore. The Vikings also placed Dakota Dozier on the reserve/COVID-19 list last week.

Because of the player having to be hospitalized, Zimmer said 29 people within the Vikings are undergoing additional COVID-19 testing due to close contact protocols, including himself.

"I mean it’s serious stuff. So we’ll just do what we do. He’s stable now, but it was scary," Zimmer said.

Quarterback Kirk Cousins said he talked to the player three or four days before the Vikings lost in overtime at the Baltimore Ravens. He sent the player a text Wednesday morning, and hadn’t heard back as of before practice.

It’s the latest to add to an already trying season for the Vikings.

Danielle Hunter is now out of for the season with a torn pectoral muscle, Smith can’t play against the Chargers due to COVID-19 protocols and Patrick Peterson is out at least one more game with a hamstring injury.

An off the field issue also popped up for Vikings’ star Dalvin Cook this week. He’s accused in a lawsuit of assault in a November 2020 incident involving an ex-girlfriend. His representation says he’s the victim of assault and extortion.

On the field, the Vikings are trying to avoid their third straight loss out of the bye week as they sit second in the NFC North at 3-5. The Vikings’ defense was on the field for 89 plays and more than 46 minutes on Sunday, and got tired in the most important parts of the second half.

Asked how he was handling the team’s series of bad news and mounting losses, Zimmer said "this team fights." They’ve had three of their eight games to go overtime, and seven of the eight decided on the final possession.

PIERCE, BARR NOT PRACTICING FOR VIKINGS

The Vikings held a walk-through at TCO Performance Center on Wednesday to start preparation to face the Chargers. Michael Pierce was not practicing in the portion open to media. Anthony Barr was also not practicing. Zimmer said he’ll give some of his veterans rest this week after so many defensive snaps last Sunday, and heading to the West Coast this week.

Cook was practicing Wednesday, and said he plans to play Sunday despite having a lawsuit filed against him by an ex-girlfriend who is accusing him of assault. There are no criminal charges in the case, the lawsuit is in civil court.