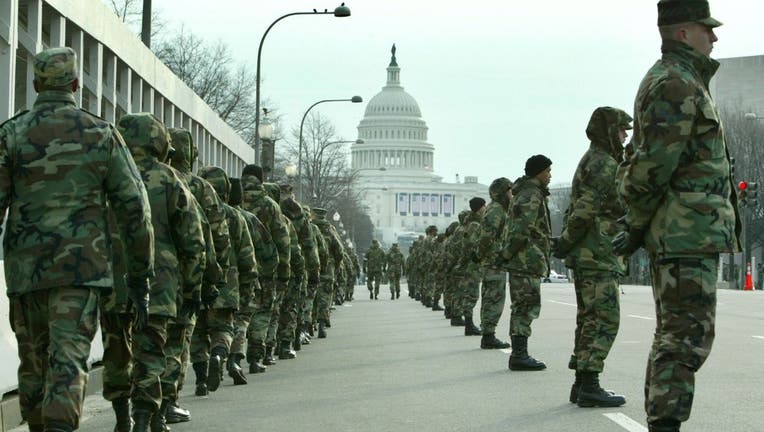 WASHINGTON D.C. - Govs. Ron DeSantis, Chris Sununu, and Greg Abbott announced that they are bringing their National Guard troops back from Washington, D.C., after reports they were posted up in a parking garage near the Capitol to rest during their shifts, a move that caused outrage at the treatment of the servicemembers.

The U.S. Capitol Police (USCP) ordered the troops to move their rest area during their 12-hour shifts from inside the Capitol to the Thurgood Marshall Judicial Center parking garage, the National Guard said Friday.

But Acting USCP Chief Yogananda Pittman pushed back on that assertion in a statement.

"I want to assure everyone that, with the exception of specific times on Inauguration Day itself while the swearing-in ceremonies were underway, the United States Capitol police did not instruct the National Guard to vacate the Capitol Building facilities," Pittman said. "And on Inauguration Day, the Guard was notified and encouraged to reoccupy the spaces in the Capitol and CVC at 2 p.m."

Pittman continued: "It was brought to our attention early today that facility management with the Thurgood Marshall Judicial Office Building reached out directly to the National Guard to offer use of its facilities."

The location for troops' rest breaks was changed early Friday, with troops now authorized by the U.S. Capitol Police Watch Commander to take their breaks near Emancipation Hall.

"We remain an agile and flexible force to provide for the safety and security of the Capitol and its surrounding areas," a National Guard Bureau spokesperson said. "Our troops are going to hotel rooms or other comfortable accommodations at the end of their shifts."

But DeSantis, a Republican, is still bringing Florida's National Guard back to the Sunshine State.

"Last night, I ordered our Adjutant General to bring Florida National Guard soldiers home from the National Capital Region," he said in a tweet Friday.

On "Fox & Friends," reacting to the controversy, DeSantis also decried background checks of National Guard troops for radicalism ahead of the inauguration and called the massive effort to protect the Capitol a "half-cocked mission at this point."

"I have instructed General Norris to order the return of the Texas National Guard to our state," Abbott tweeted late Thursday. Abbott had also previously lodged a similar objection to DeSantis over the background checks into National Guard servicemembers.

Sununu, the GOP governor from New Hampshire, also announced he is recalling his state's National Guard, saying the soldiers "should be graciously praised, not subject to substandard conditions." But the outrage at the soldiers being sent to rest in a garage was hardly partisan.

"If this is true, it's outrageous," Senate Minority Leader Chuck Schumer, D-N.Y., said in response to an initial report on the situation by Politico. "I will get to the bottom of this."

Merkley specifically offered his office's conference rooms and bathrooms to guard members. The U.S. Capitol Police said in a statement earlier Friday that it "immensely appreciates" the National Guard's assistance in recent days.

"The United States Capitol Police immensely appreciates the integral support of the U.S. National Guard in helping to secure the Capitol Complex leading up to, and including the Inaugural ceremony. The Department is grateful for their service and our strong partnership during this time," the U.S. Capitol Police said in a statement.

It continued: "The Department’s request for National Guard assistance included a specific number of personnel to allow the National Guard to provide, at a minimum, 12 hours of off-campus rest time for the troops, and understood that this would be carried out throughout their deployment."

"Recently, the Department requested that the troops’ schedules be changed so they work no more than 8-hour shifts to allow for more off-campus rest time post-Inauguration," the U.S. Capitol Police added. "The Guard is reviewing the request so that logistics and schedules can be adjusted."

The increased threat level to the Capitol came after a pro-Trump mob stormed and ransacked the building on Jan. 6, as members sat in a joint session to certify the presidential election results.

Former Vice President Mike Pence, along with hundreds of lawmakers, were forced to hide from the mob.