Eight suspects are now being investigated for the teen's exploitation.

The North Richland Hills teen disappeared in Dallas and was found at a motel in Oklahoma City.

She is now safe and back in North Texas with her family.

Two men and six women have been arrested in Oklahoma City and face charges in connection with her disappearance April 8 from a Dallas Mavericks game at the American Airlines center in Dallas.

The teenager never returned to her seat after going to the restroom, and surveillance showed her leaving the arena with a man.

Several days later, and across state lines, the investigation heightened.

"Over the weekend, three were arrested for human trafficking. The victim had not been located at that time yet," said Oklahoma City Police Department Captain Valerie Littlejohn. "The victim was found safe on Monday, at which time, five other people, somehow in relation throughout the investigation, were arrested." 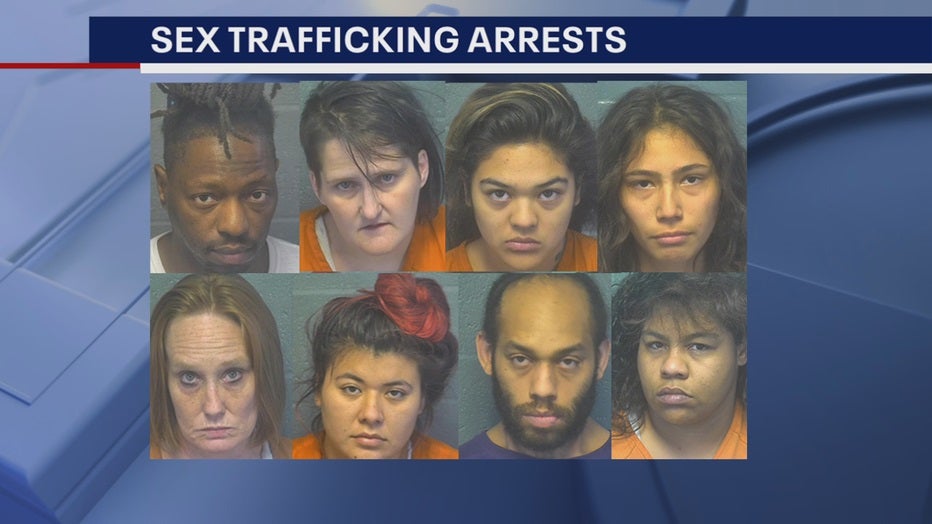 Two men and six women have been arrested in Oklahoma City and face charges in connection with the girl's disappearance from a Dallas Mavericks game at the American Airlines center in Dallas. (FOX 4 News)

An arrest affidavit indicates "an online ad was located on a website known for prostitution. The ad featured recent photos of the victim."

Police said the identity thief is one of the arrested suspects, Kenneth Nelson, and he rented rooms at a Travelers Inn and Suites hotel in Oklahoma City.

Investigators later determined the photos of the teen were taken at that location.

The affidavit states, "a witness stated that the victim was with Kenneth Levan Nelson when he was at the hotel on April 14, 2022... The same day that the picture was posted on the internet."

Captain Littlejohn could not shed light on further details in their investigation, including the identity of the man who left American Airlines Center with the teen, whether he’s one of the arrested suspects, or exactly where she was found on Monday.

"It’s very fortunate that we located her and she was safe, because time is of the essence in these types of cases and you never know," Littlejohn said. "If they get moved somewhere else and it’s really hard to track certain things…it’s dangerous, you don’t know what could happen."