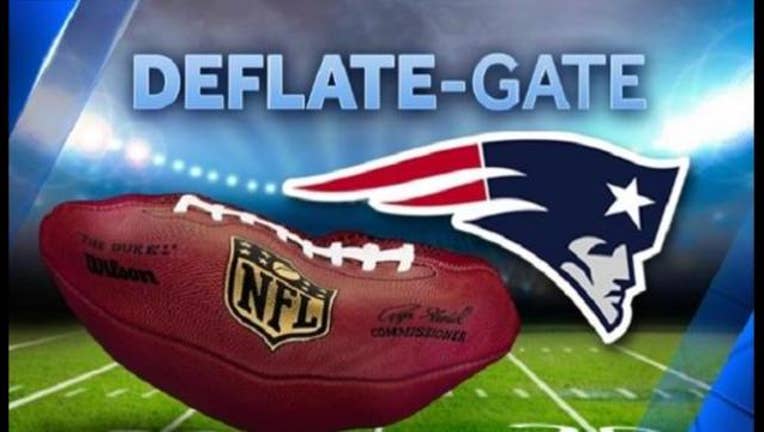 The 243-report on "Deflategate" came out Wednesday and stopped barely short of calling the Patriots star quarterback a cheater. It did, however, call some of his claims "implausible" and left little doubt that he had a role in having footballs deflated before New England's AFC title game against Indianapolis in January and probably in previous games.

In his report, attorney Ted Wells said the quarterback "was at least generally aware" of all the plans to prepare the balls to his liking, below the league-mandated minimum of 12.5 pounds per square inch. Wells said it was "more probable than not" that two Patriots employees - officials' locker room attendant Jim McNally and equipment assistant John Jastremski - executed the plan.

For his trouble, McNally asked for expensive shoes and signed footballs, jerseys and cash. He brokered the deals over a series of salty text messages with Jastremski that portray Brady as a hard-to-please taskmaster. "F--- Tom," one read.

For the biggest home game of the season, McNally came through, taking the footballs from the officials' locker room into a bathroom before delivering them to the field, the report said.

The footballs - measured by officials at halftime- somehow lost pressure between being tested by the referee and the break.

As for Brady's claims that he didn't know of efforts to deflate game balls and didn't know anything about what McNally did: "We found these claims not plausible and contradicted by other evidence," Wells wrote.

The penalties for all this? To be determined. League executive vice president of football operations Troy Vincent is reviewing the report and will hand down the punishment.

Former NFL executive Bill Polian, familiar with the league's crime-and-punishment procedures after spending 19 years on the powerful competition committee, said the term Wells used - "more probable than not" - has been the standard of proof the NFL has used for competitive violations over the last six years.

"In short, he is finding there was a violation," Polian said. "In many ways I think this report is as important as the discipline. It clearly says a violation occurred."

This offseason, the league has fined the Falcons $350,000 and stripped a fifth-round draft pick for pumping artificial crowd noise into the stadium during home games. It also suspended Browns general manager Ray Farmer for four games for sending texts to the sideline during games last season.

By almost any account, this rules violation is more serious. It involves arguably the league's top star, a four-time Super Bowl winner who is bound for the Hall of Fame, and its marquee team - one that has spent almost the last decade under the microscope after getting caught in the videotaping scandal dubbed "Spygate" in 2007.

One sign of the real-world reaction: The gambling website Bovada took down all betting odds on the Patriots until it finds out whether Brady will be suspended.

Back in 2007, it was coach Bill Belichick in the crosshairs for cheating. This report didn't find any evidence that Belichick or the coaching staff knew anything about deflating the balls.

Owner Robert Kraft called the conclusion "incomprehensible." But he said the Patriots would accept the findings and any subsequent discipline.

The report cites evidence that McNally took the game balls into a bathroom adjacent to the field, and stayed there for about 100 seconds - "an amount of time sufficient to deflate thirteen footballs using a needle."

Other evidence included referee Walt Anderson's inability to locate the previously approved footballs at the start of the game - the first time that had happened to him in 19 years.

The report includes text messages between McNally and Jastremski - sent in October and January - that imply Brady was requesting deflated footballs. The texts also imply that Brady had previously been upset with the quality of the game balls.

They described requests from McNally for swag from Brady in exchange for deflating the balls.

"Remember to put a couple sweet pig skins ready for tom to sign," one said.

"Nice throw in some kicks and make it real special," another said.

A footnote in the report mentions that Brady put up better stats in the second half of New England's 45-7 romp over Indianapolis - after the Colts had relayed suspicions of under-inflated footballs and they had been pumped up to regulation level.

Still, footballs with less pressure can be easier to grip and catch. Some quarterbacks prefer footballs that have less air, and Brady played a role in a 2006 rewriting of the rules that allowed visiting teams to supply the footballs it would use on offense.

In investigating Brady, Wells said he was hindered by the quarterback's refusal to provide his own emails, texts or phone records.

But using Jastremski's phone records, Wells detected an increase in the frequency of phone calls and texts between Brady and the equipment assistant shortly after suspicions of tampering went public. After not communicating via phone or text for six months, they spoke six times on the phone over the course of three days.

Nowhere in the 243 pages does Wells use the word "cheat" or "cheater" in reference to Brady or anyone else.

But it's not hard to read between the lines: "We believe it is unlikely that an equipment assistant and a locker room attendant would deflate game balls without Brady's knowledge and approval," Wells wrote.

AP Sports Writers Jimmy Golen in Boston and Mike Marot in Indianapolis contributed to this report.