So far, the National Weather Service has confirmed one EF-2 tornado north of Egan in Johnson County, a smaller EF-0 tornado in Keene and an EF-1 tornado in Collin County.

DALLAS - Many North Texans are cleaning up this morning after a night of tornadoes, high winds, hail and flash floods.

So far, the National Weather Service has confirmed one EF-2 tornado north of Egan in Johnson County, a smaller EF-0 tornado in Keene and an EF-1 tornado in Collin County. That number could increase as a crew Tuesday continues surveying the damage in Kaufman and Van Zandt counties.

FOX 4 viewer Jackie M. shared this photo of a funnel cloud with flames from a Johnson County pallet fire in the background.

A tornado caused damage and one injury in Johnson County overnight. The worst hit area was the community of Egan, not far from Alvarado south of Fort Worth.

More than 90 structures were damaged in Johnson County by an EF-2 tornado with max winds up to 112 mph. Several families were without power for hours.

At least one person was hurt in the Johnson County community of Egan when a travel trailer flipped over.

Brittaney Deaton said she was in an RV behind her family’s home at the time. Her mom called her and told her to come into the house.

Deaton said she tried but said she became trapped in the RV because the stairs were blocking the door. Her father ran to help, and that’s when the RV or metal from it rolled on top of them.

"I was trying to get out before she even called me. I was screaming on the phone. I couldn’t get out. I was terrified," she said. "And I felt like I was just trapped, like it was gonna roll with me in it. And I just thank God that I got out."

"I had got up and I thought he was right behind me. And then I looked back and he’s yelling at me to get help, call 911," she said. 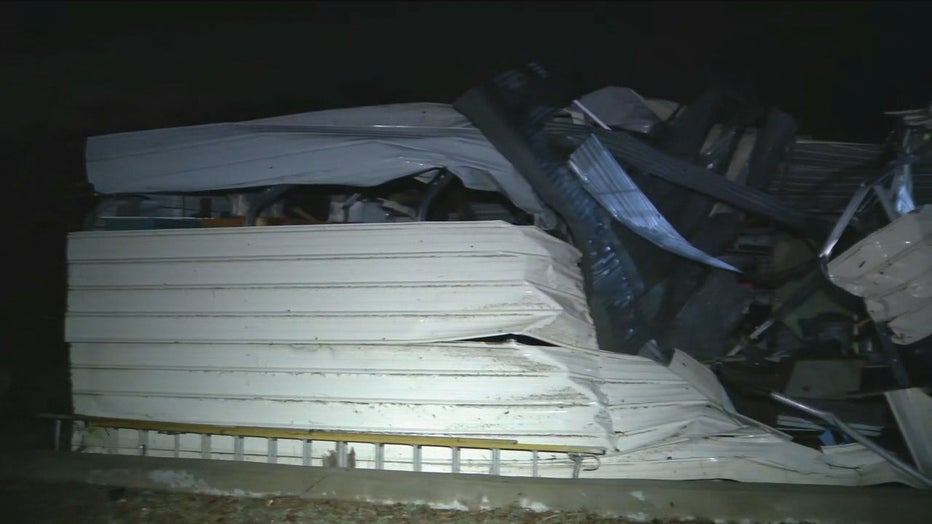 "He was laying sideways on his side, and I didn’t know it at the time ‘til later but his ear, part of his ear is hanging. His nose is broken. Most likely he’s got a broken leg and broken ribs," said Amber Zeleny, Deaton’s mother.

He was taken to the hospital and is expected to be okay.

"I am so very blessed that they’re okay. I mean, all this can be fixed. All this can be replaced. They can’t. And I cannot handle losing…," Zeleny said.

Johnson County’s emergency management office said the damage spans at least 15 miles. Teams will be out surveying the area to get a better idea of the extent of the damage.

Over in Venus, Jeff Wilson is looking at about $35,000 worth of damage to his car port and shed.

"I closed the front door, and I came out this door," he recalled. "And I watched these two pieces come sailing over into the trees. And a little bit later, it flopped over that way and landed over the roof."

Wilson’s family took cover in a bedroom as the storm picked up around them.

"When the wind started blowing, the hail started getting. The front screen door, I was standing behind it and I watched it curve in," he said.

"I was just thinking about getting the kids into the laundry rooms, and we just started grabbing them and trying to get in there," she said.

Like many others, the storms knocked out power for some time. Crews were out Tuesday morning making repairs as quickly as possible.

"None of us could see because the lights were out," recalled Andy Smith. "We were running into walls and hitting each other."

Next door, Stephen Barns hasn’t had any time to sleep. He says he helped his injured neighbor down the driveway to the ambulance waiting on the main road.

"We are all lucky because we are still alive," he said.

Homes damaged, power out after possible tornado in Johnson County

Barns’ property is littered with mangled debris as power companies get to work. His carport is sliced in half by a metal panel. Thankfully, it blocked any damage from hitting his home.

Donna Keen, her husband and her animals at Remember Me Rescue in Burleson all weathered the storm. The tops of her barns were thrown into a tree. Her fences are flattened.

"I look over at the tv and the weatherman goes, ‘We have a warning in Bur-.’ And then the electricity cut off," she recalled.

Keen grabbed a flashlight and came outside to check on her horses and donkeys, including a newborn foal.

The Red Cross will be at First Baptist Church of Alvarado offering assistance Wednesday from 10 a.m. to 6 p.m.

The National Weather Service will survey damage from a possible tornado in Collin County. There is damage in the small town of Blue Ridge, northeast of McKinney.

A confirmed EF-1 tornado touched down in Collin County. Some of the worst damage is in the small town of Blue Ridge, located 20 miles northeast of McKinney.

Debris is now scattered across the front yard of a church near FM 545. That material may have been blown clear across the roadway.

There are a number of tree limbs and branches down across the town and a large section of the roof over a self-serve car wash is damaged.

Members of the Blue Ridge Fire Department said they were gathered inside their station's meeting room when the winds really started picking up.

They were preparing to respond to emergency calls when the roof of their own building came apart and left quite a mess inside.

"The warning had just been canceled. We thought… we were fixing to get up and see what was done that's when that hit," said Captain Bonnie Bowers. "It just got really loud then the roof was off so the rain started pouring in through the ceiling. It happened really quickly. I mean, everything was very quick."

None of the firefighters were hurt and there were no other reports of injuries in the community. 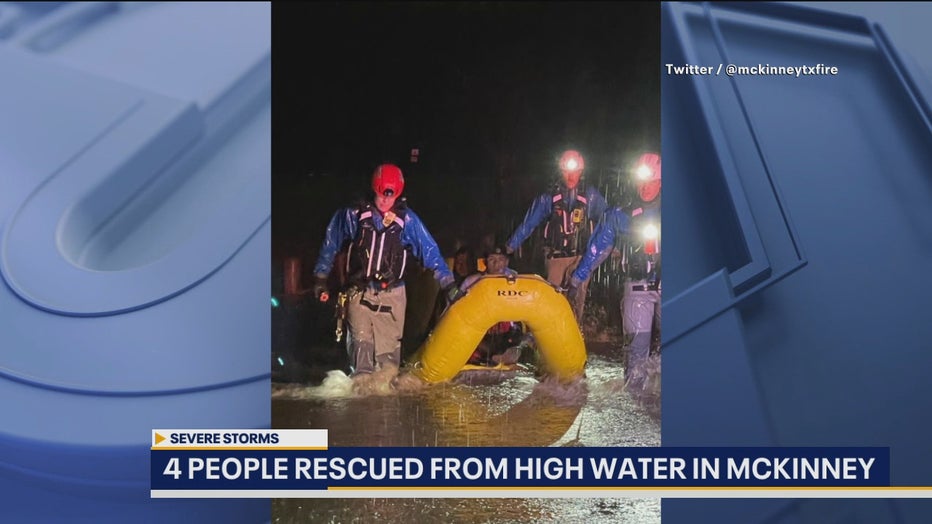 Several people had to be rescued from flooded streets because of the heavy rain. The McKinney Fire Department shared pictures during the worst of it.

Its specially trained teams saved four people after their cars were swept away by rising and fast-moving water. All are okay.

That same heavy rain caused some typical trouble spots to flood in North Dallas and elsewhere.

Some cars were briefly stuck in high water on bridge in Justin as storms make their way across North Texas.

Download the FOX 4 WAPP to receive weather alerts, live video updates and to keep an eye on the radar.