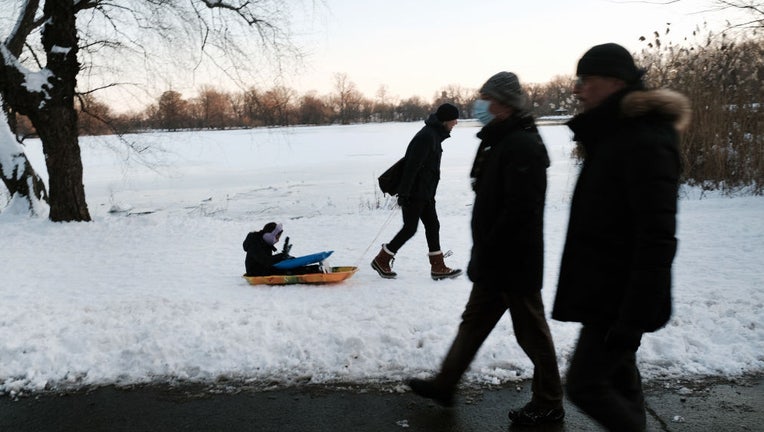 The coldest air so far this fall is invading a widespread area of the Midwest, South and East, placing millions at risk of frosts and freezes this week as a powerful storm system also brings rounds of snow, rain and gusty winds from the Great Lakes to the Northeast.

A strong low-pressure system being tracked by the FOX Forecast Center is responsible for ushering in the widespread chilly air mass, which could make it all the way to the Gulf Coast by midweek.

This early-season cold snap will provide the lowest temperature since April in many areas, with more than 180 million people estimated to see temperatures of at least 10 degrees below average on Tuesday and Wednesday. 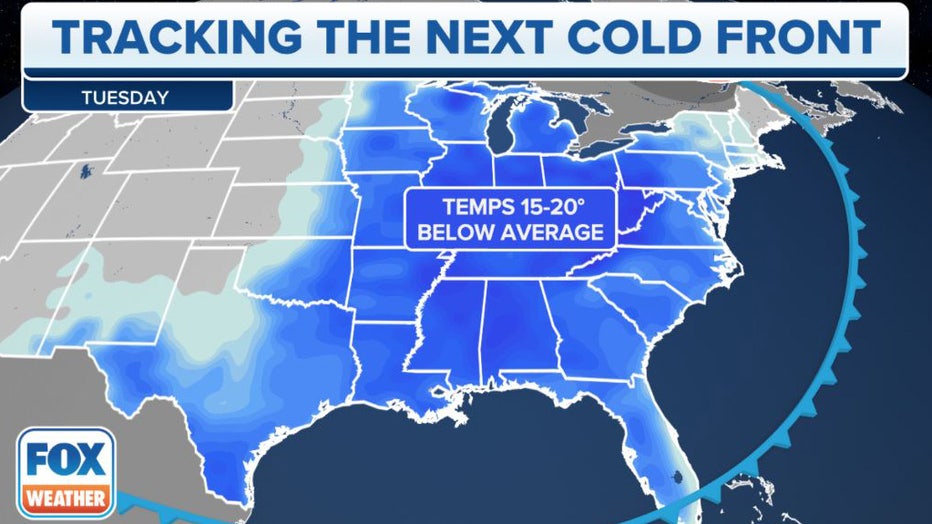 A widespread cold air mass is infiltrating the U.S. this week. (FOX Weather)

The FOX Forecast Center said the cold air will start to move into the country out of Canada on Monday, but Tuesday and Wednesday are when the chill will be felt by nearly the entire eastern half of the nation.

"By the time we get to Tuesday and Wednesday, there will be reinforcing shots of cold taking the temperatures 15 to 20 degrees below the average," FOX Weather meteorologist Amy Freeze said. "The eastern half of the country getting ready for layered-up wardrobes for sure. Temperatures could actually be going as low as the 30s as far south as Mississippi, Alabama and Georgia."

LA NINA WINTER WILL MEAN PARTS OF U.S. WILL FEEL LIKE A TUNDRA BUT SNOWY WONDERLANDS COULD BE HARD TO COME BY 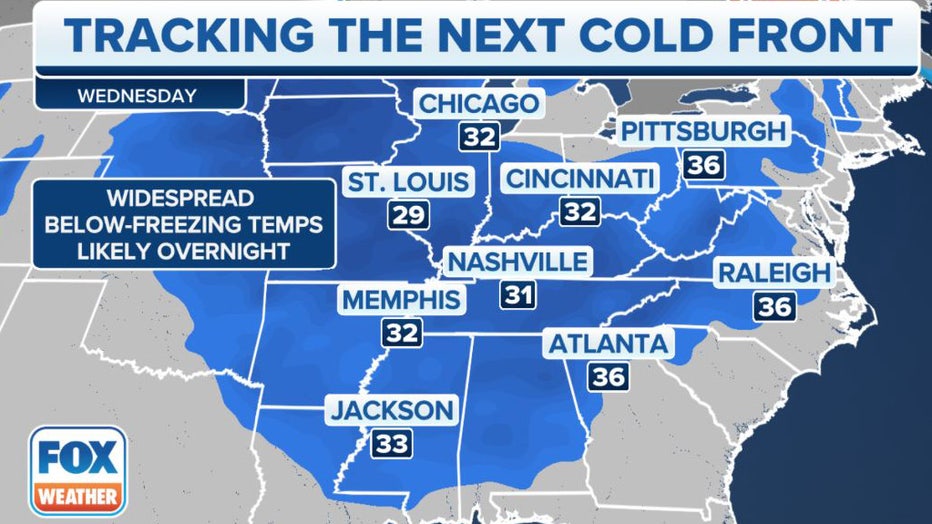 A widespread cold air mass is infiltrating the U.S. this week. (FOX Weather)

How low will temperatures go?

The cold air will mean both morning low temperatures and afternoon highs will be much colder than average across the Midwest, South and East.

The FOX Forecast Center expects more than 60 million people from the Canadian border to the Southeast will experience below-freezing temperatures Tuesday and Wednesday mornings.

Morning lows near or below 32 degrees are expected as far south as Nashville and Memphis in Tennessee and Birmingham and Huntsville in Alabama. A freeze would be these cities' first of the season.

Along the Interstate 95 corridor in the Northeast, low temperatures will generally remain above freezing, but near- or below-freezing temperatures are expected across the interior Northeast and northern New England.

HERE'S WHEN TO EXPECT THE FIRST FREEZE OF THE SEASON 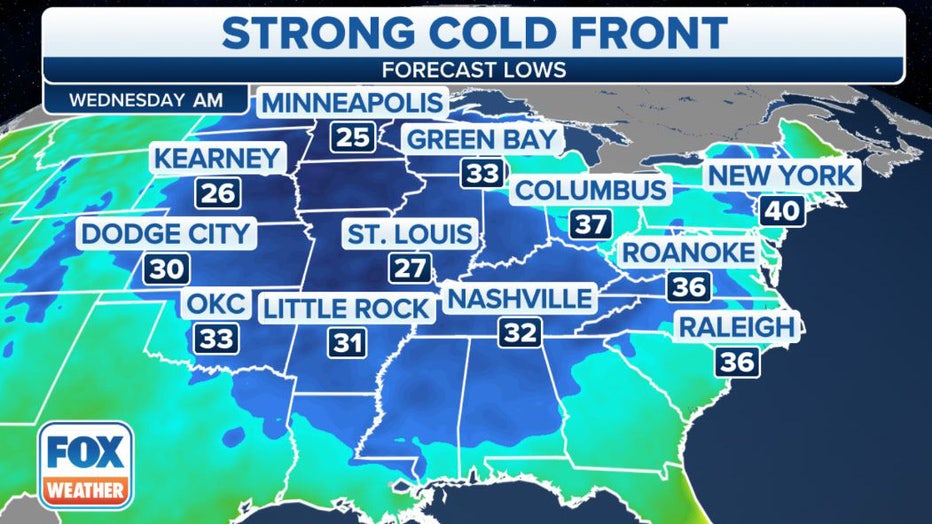 This cold air invasion has prompted the National Weather Service to issue Freeze Watches and Warnings for more than 70 million Americans across the Midwest, South and East.

According to the FOX Forecast Center, the annual growing season will likely come to an end in many areas because of the likelihood of temperatures dropping to near or below 32 degrees. 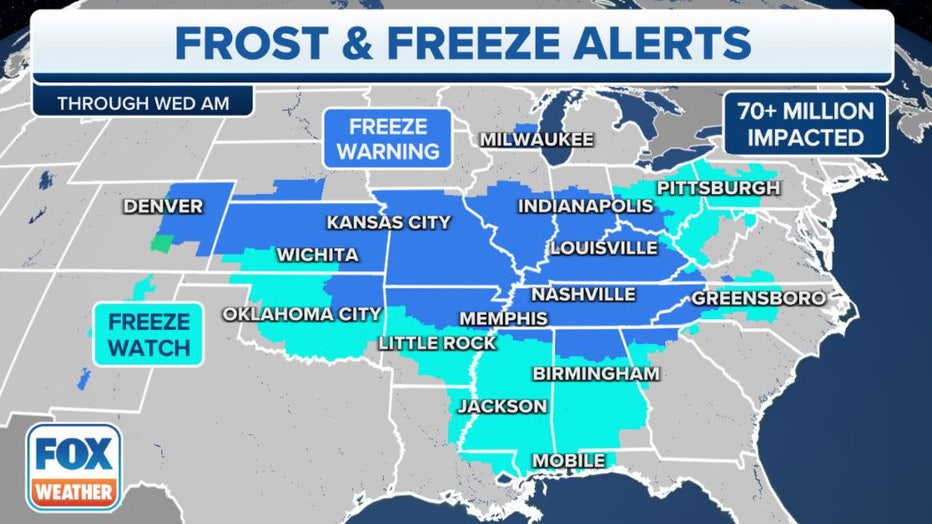 Freeze Watches and Warnings have been issued across the Midwest, South and East. (FOX Weather)

High temperatures will be stuck in the 40s from the northern Plains and Upper Midwest to the interior Northeast.

While not as cold, afternoon highs will still be chilly across the rest of the Midwest and into the East, with temperatures remaining in the 50s from the Interstate 95 corridor in the Northeast into parts of the Southeast. 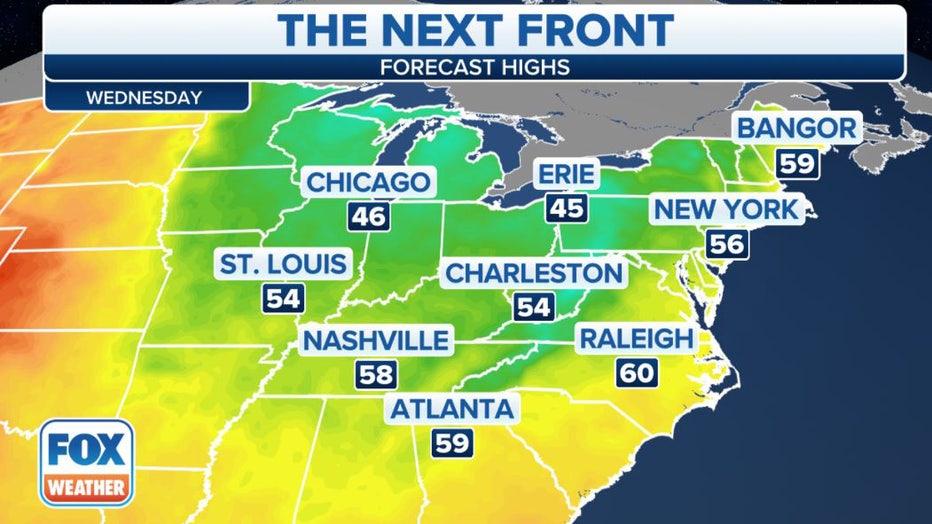 "By the end of Tuesday, we are going to end up seeing the majority of you across even the Southeast impacted, and once that happens, we will end up seeing temperatures anywhere from 15 to upwards of 20 degrees below where they should be," Frazer said. 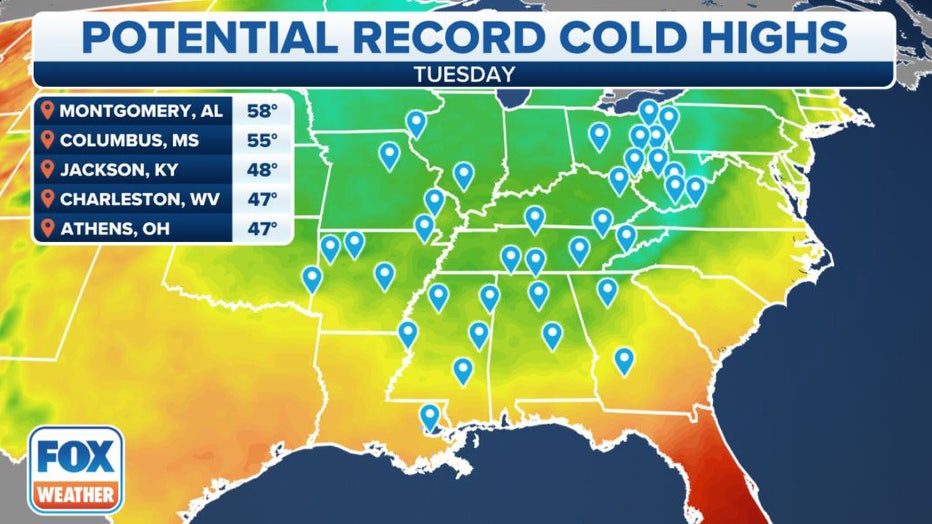 The cold temperatures in combination with gusty winds over the relatively warmer Great Lakes will establish a pattern for lake-enhanced snow and rain showers from the Great Lakes to parts of the Northeast through midweek.

Cities such as Chicago, Milwaukee, Pittsburgh, Cleveland and Columbus in Ohio and Syracuse in New York will all have the potential for rain that could mix with a bit of wet snow, though little or no accumulation is expected due to warm ground temperatures and air temperatures hovering above freezing.

WHEN CAN YOU EXPECT THE FIRST SNOW OF THE SEASON?

This index considers various data sources to depict how significant the impacts could be, and right now, the only suggestive action is for travelers to drive carefully. The snow should not have a significant impact on daily life. 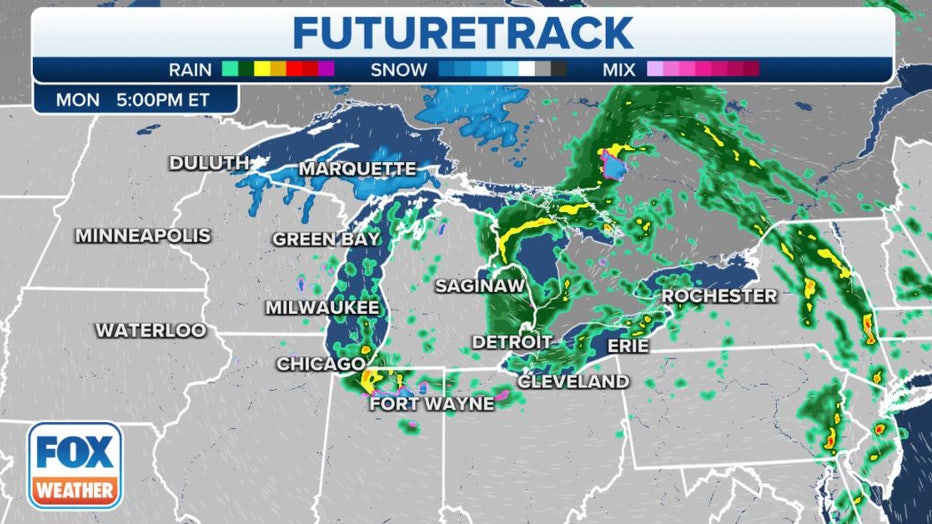 The heaviest bands of lake-effect snow will remain focused over the Upper Peninsula of Michigan and far northern Wisconsin, where the first significant snowstorm of the season is expected.

WHAT IS LAKE-EFFECT SNOW? 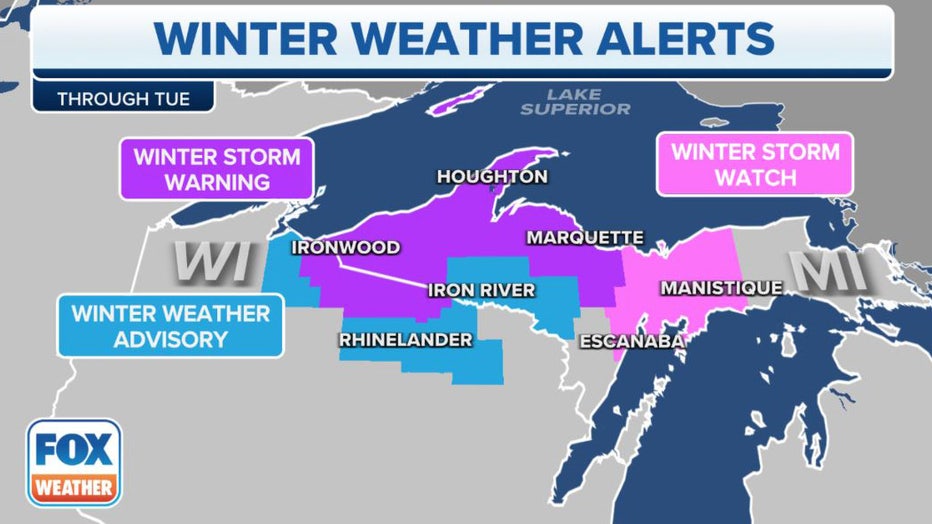 A foot or more of snow could fall in localized portions of Marquette and eastern Baraga counties in the Upper Peninsula of Michigan, with up to 6 inches of snowfall possible in the rest of Upper Michigan.

These snow amounts could be disruptive to transportation, so be sure to use caution if you must travel on any snow-covered roads.

TRAVELING THIS WINTER? HERE'S WHAT TO KEEP IN YOUR CAR IN CASE YOU GET STUCK 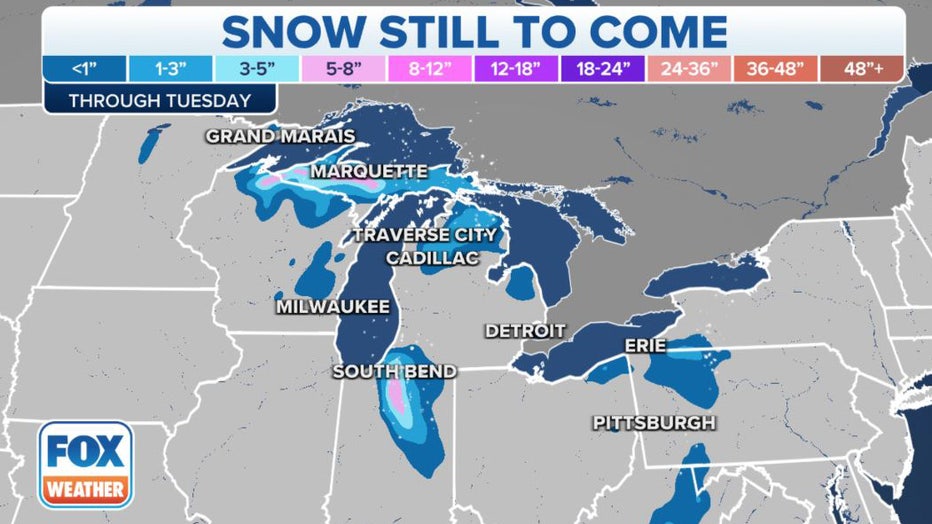 Regardless of the amount of snow, this is the first significant winter weather event of the season in the region.

While snow fell across parts of the Upper Midwest and Great Lakes last week, accumulations remained light and were really only a nuisance in most areas.

The lake-effect snow falling in the Upper Peninsula of Michigan on Monday morning was its heaviest snowfall so far this season and was seen quickly piling up on untreated roads and sidewalks.

The same storm system responsible for spawning the snow in parts of the Great Lakes region is also generating some rain and wind across portions of the Northeast.

Stubborn clouds and numerous rounds of rain showers and gusty winds are expected through Wednesday. 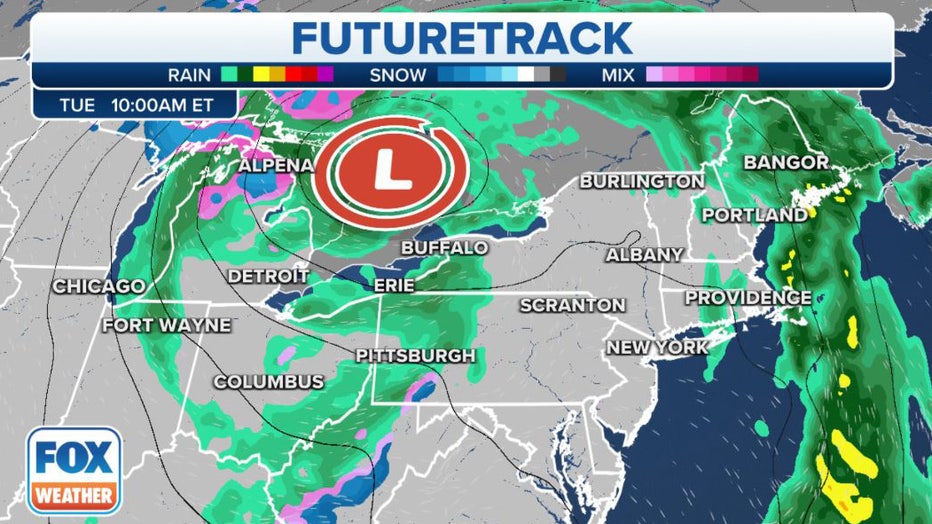 The heaviest rain will fall in northern New England, where eastern portions of Maine have been placed under a Flood Watch because of the potential for flash flooding through Wednesday.

Wind gusts between 20 and 30 mph will accompany the rain showers, especially in the interior Northeast. Gusts from 30 to 40 mph are possibly closer to the Great Lakes, kicking up large waves and resulting in dangerous boating conditions. 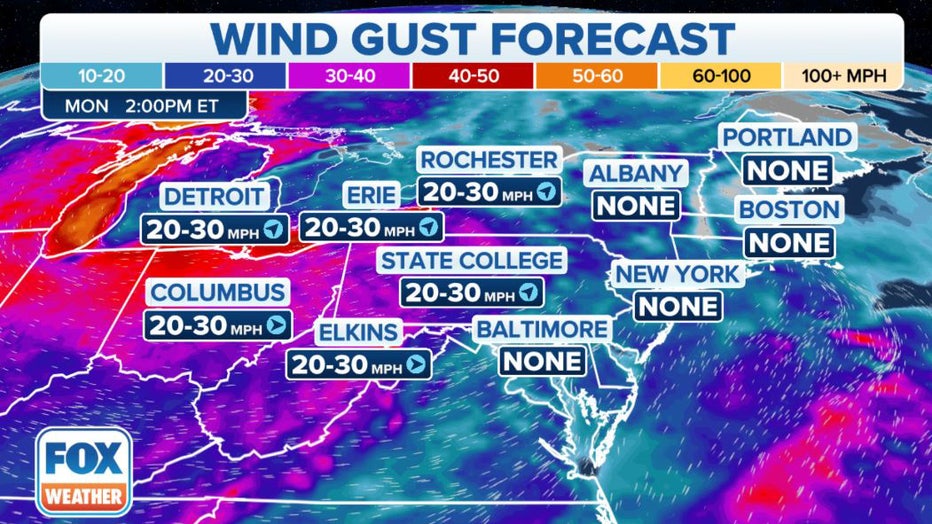