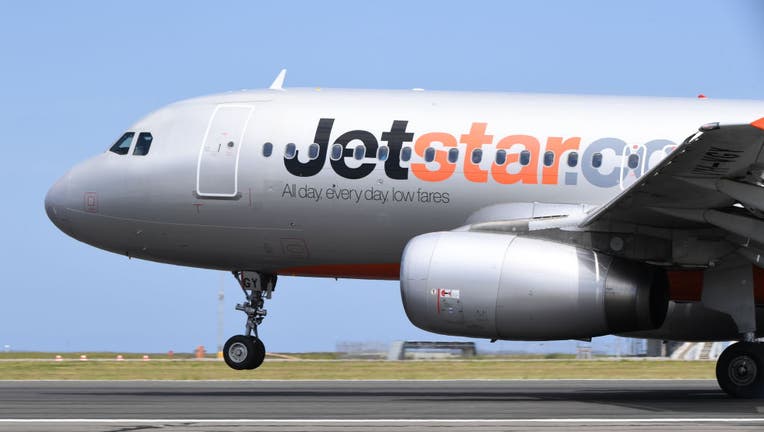 A Jetstar aircraft lands at Sydney Airport on November 09, 2021 in Sydney, Australia.

A Jetstar passenger with a disability says she was humiliated after having to crawl off the airplane in order to get to her wheelchair.

Video of Australian passenger Natalie Curtis surfaced over the weekend, showing Curtis using her hands to lift her body down the plane's aisle after it landed in Bangkok.

After the plane landed, Curtis was reportedly told that she would have to pay extra to use a special wheelchair that fits in the plane's aisle, which would transfer her from her seat to her own wheelchair, according to multiple reports.

She said she refused the service because it is normally free, according to local Australian news outlet, 7NEWS Townsville.

When Curtis first boarded the flight in Singapore, she was offered the special wheelchair service for free, the Daily Mail reported.

Curtis told 7NEWS Townsville that she will never fly with the Australian low-cost airline again after feeling humiliated and degraded.

"Definitely the most humiliating experience I have had traveling," Curtis wrote on her Facebook page, adding that she "most definitely did not do this for attention."

A representative for the carrier told 7NEWS Townsville that this incident was the result of a misunderstanding between the airline staff and the passenger. The company says it has since reached out to Curtis to offer her a refund "as well as additional compensation."

"A miscommunication resulted in the delay of an aisle chair being made available at the gate on arrival…at no point was an aisle chair withheld due to a request for payment," the carrier said in a statement.