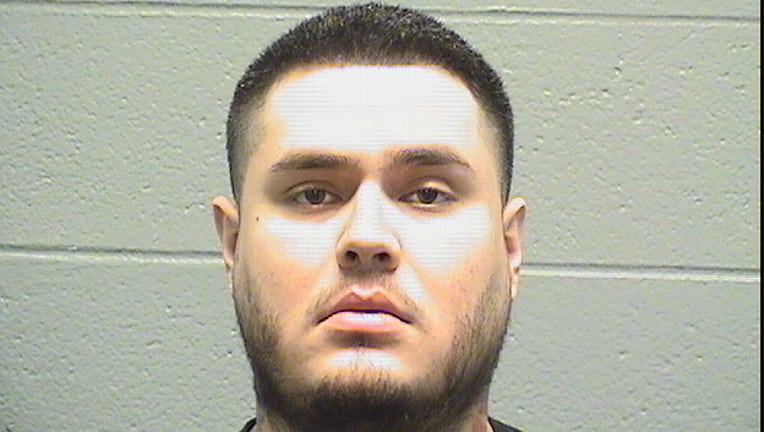 CHICAGO - A reputed gang member was charged with fatally shooting a 37-year-old woman on her way home from church with her husband on the Northwest Side, the Chicago Sun-Times is reporting.

Cook County prosecutors Monday said it was still unclear why Maria Reveron was shot to death on March 24 but they theorized it was a case of mistaken identity.

Marco Pulido, 29, had left a party in his friend’s BMW X5 to pick up more alcohol, the Sun-Times reported. While on his liquor run, Pulido allegedly started trailing the Reverons’ sedan in the 2600 block of North Long Avenue.

Pulido allegedly fired one round, striking Reveron in the back of her head, prosecutors said. It wasn’t clear why Pulido fired the shot.

Reveron, who suffered a gunshot wound to the back of her head, was taken to the hospital and died two days later, authorities said.

Less than an hour after the shooting, Pulido returned to the party without alcohol, the Sun-Times reported. Witnesses noted that Pulido "appeared nervous and his hands were shaking," prosecutors said.

Surveillance video doesn’t show the shooting, but prosecutors said video before and after the shooting shows a time-period so short that no one else could’ve fired the shot. Pulido’s defense attorney argued that it wouldn’t have taken long for another shooter to exit the car and have fired the shot.

Prosecutors said messages on Pulido’s phone had been deleted from the day of the shooting. Prosecutors also said Pulido, a self-admitted Maniac Latin Disciple, identified himself in a surveillance photo taken right after the shooting at a Dunkin’ Donuts drive-thru.

Pulido was ordered held without bail for Reveron’s murder.

He is expected back in court on April 23.