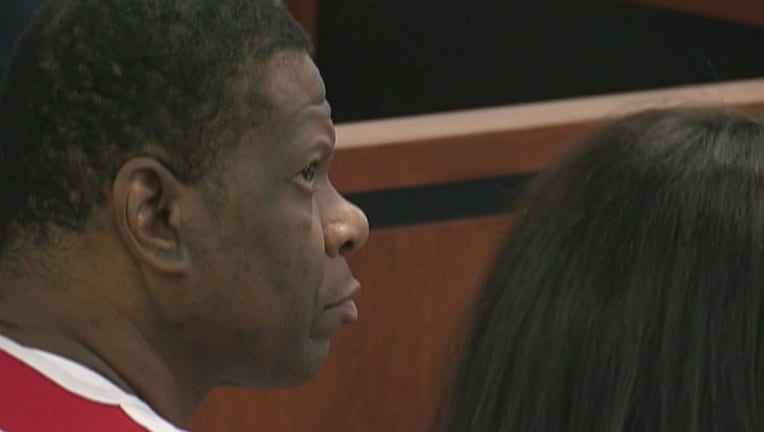 AUSTIN, Texas - Celebrities are banding together to try to free Rodney Reed — a Texas death row inmate accused of raping and killing a woman — ahead of his scheduled execution two weeks from Wednesday.

Kim Kardashian, Rihanna, T.I. and Meek Mill are among the high-profile names advocating for Reed's release. The 51-year-old man has maintained his innocence in the abduction, rape and strangling of Stacy Stites, a 19-year-old whose body was found off the side of a road roughly 35 miles southeast of Austin in 1996.

Reed was arrested nearly a year after Stites' death, after his DNA surfaced in an unrelated sexual assault, and in 1998 was sentenced to death. But his lawyers have said new evidence points to the woman's fiancé, Jimmy Fennell, who was a suspect in the original investigation.

Kardashian — who revealed earlier this year she's studying to become a lawyer — spoke with Reed last week to discuss his scheduled execution, TMZ reported. She believes new witnesses and evidence will exonerate Reed for the murder, and implicate the true culprit.

Last month, she tweeted she believes Reed is innocent and urged Texas Gov. Greg Abbott to "do to the right thing" and grant Reed clemency, writing: "How can you execute a man when since his trial, substantial evidence that would exonerate Rodney Reed has come forward and even implicates the other person of interest."

The reality television star has "been working tirelessly behind the scenes to provide legal resources to Reed as he tries to get a stay of execution," per TMZ. Reed's brother thanked Kardashian on Monday and described her as "a blessing to all the families you advocate for. We're so glad you have publicly voiced that you also believe he is innocent."

Singer Rihanna is also advocating for Reed's release. She tweeted out a link to the "Free Rodney Reed" petition — that's garnered over 1.4 million signatures as of Wednesday morning — and urged her followers to "SIGN this petition if you don't believe the Government should kill an innocent man!!! @GovAbbott."

Rapper Meek Mill, who has had his own problems with the criminal justice system stemming from a 2007 arrest, tweeted on Sunday he doesn't believe Reed killed Stites, and posted a link to FreeRodneyReed.com. He said in August he planned on continuing "to do what I do with the reform movement and help the people that helped me.”

Other rappers — including T.I., LL Cool J and Busta Rhymes — have also tweeted encouragements to sign the petition for Reed.

Separately, the European Union, a delegation that promotes EU policies in the United States, sent Abbott a letter on Oct. 30 urging him to grand Reed clemency, as they said the evidence "casts substantial doubt as to his culpability," and the EU is opposed to capital punishment.

Last year, the U.S. Supreme Court refused to review a ruling by the Texas Court of Criminal Appeals that refused to DNA test additional evidence that was collected by investigators in Reed's case. The Texas court said in 2017 Reed’s lawyers were intending to “unreasonably delay” his execution.

The Innocence Project — a non-profit legal group also campaigning for the death row inmate's release — filed for clemency last week on behalf of Reed with the Texas Board of Pardons and Paroles.

Reed is scheduled for death on Nov. 20. Read more on FOX NEWS.