KYIV, Ukraine - One month into Russia's invasion of Ukraine, fire rained down on a shopping mall and high-rise buildings in Kyiv, as the outnumbered Ukrainian military waged intense battles to defend the capital and other key cities from falling under Russian control.

A barrage of strikes on cities have wreaked destruction across Ukraine over the past four weeks, but Russian forces appeared stalled outside major cities in the face of fiercer-than-expected Ukrainian resistance. NATO estimated on Wednesday that 7,000 to 15,000 Russian soldiers have been killed since the war started Feb. 24.

On Wednesday, the U.S. made a formal determination that Russian troops have committed war crimes in Ukraine, as some of the millions who have fled continue to recount tales of horror. As one woman told The Associated Press: "People are being killed day and night." 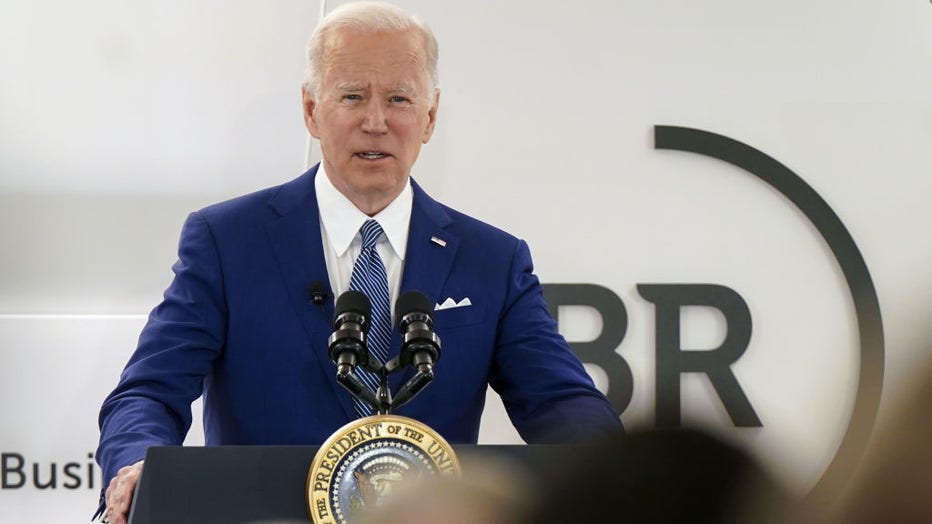 What is happening on the ground?

The capital of Kyiv is still under fire. A barrage of shelling rocked the city on Wednesday, with rockets slamming into a shopping mall and high-rise buildings in the districts of Sviatoshynskyi and Shevchenkivskyi.

From a public park in Kyiv, mayor Vitali Klitschko said Russian bombardment had so far killed 264 civilians in the capital, including four children. As he spoke to reporters, explosions and loud gunfire echoed across the city.

Wednesday's shelling claimed the life of another journalist. The independent Russian news outlet The Insider said Russian journalist Oksana Baulina was killed in a Kyiv neighborhood.

Russian forces were also bombing the ancient city of Chernihiv in northern Ukraine, the governor said Wednesday, destroying a bridge that had been critical for evacuations and aid deliveries. Chernihiv residents are without clean water and gas for cooking and heating, city officials said.

What is happening in Mariupol?

Mariupol, a strategic port city on the Sea of Azov, has become a vivid symbol of the war’s savage destruction.

Some 100,000 of Mariupol's prewar population of 430,000 remain trapped in the city, Ukrainian President Volodymyr Zelenskyy said. They are subject to relentless Russian bombardment from the sea and skies, and they are struggling to survive without heat, food or clean water.

Zelenskyy accused the Russians of seizing a humanitarian convoy that was trying to get desperately needed food and supplies to residents. Deputy Prime Minister Iryna Vereshchuk said 11 bus drivers and four rescue workers were being held captive.

Firefighters sprayed water on a smoldering residential building that was demolished by Russian shelling in western Kyiv early Wednesday. As the sound of fighting rumbled in the distance, fire service spokesperson Svitlana Vologda told the AP that the fire was the largest since the war began, in terms of requests for firefighters to respond.

Kyiv was shaken by a constant barrage of shelling Wednesday and plumes of black smoke rose from the western outskirts of the city. At dusk, air raid sirens wailed over the capital as the attacks continued.

In the seaside city of Odesa, fondly known as the Pearl of the Black Sea, street musicians played under cloudless skies as people fled.

Odesa has so far been spared the worst of Russia’s onslaughts, but a major attack on Ukraine's biggest port city seems inevitable. Anxiety is growing. The streets are stacked with sandbags and barricades. Tearful families waved goodbye to loved ones at the train station.

"I can’t understand what has happened," said Igor Topsi, a musician.

Ukrainian refugees fleeing to Medyka, Poland, were greeted with live music, as a man played the piano near the border crossing on March 4. (Credit: Daniel Baird via Storyful)

What are Ukranian refugees saying?

Some of the more than 3.5 million people who have fled Ukraine have shared nightmarish stories of death, destruction and the painful separation from loved ones.

Natalia Savchenko, 37, arrived in Medyka, Poland, on Wednesday and said the situation in the eastern city of Kharkiv is "terrible." She said there is no electricity or water, and children are not being given medicine or food.

"People are being killed day and night. They are shooting with everything they have," she said.

At the train station in Przemysl, Poland, Kateryna Mytkevich said her family was trapped in the northern city of Chernihiv for three weeks and hoped the war would pass them by — but then "bombs began to fall."

"Our children are dying. My son had to stay in Chernihiv, I could only take my daughter with me. It hurts a lot." said Mytkevich, 39.

Volodymr Fedorovych, 77, also fled Chernihiv, saying: "There was nothing, there wasn’t even bread." He said bread was brought in every three days, and on one day, he walked away from the bread line to get some tea when a bomb fell without warning.

"Sixteen people died and 47 were taken by ambulance, some of them without arms and legs. Horrible. There were one hundred people in that queue," he said. Ukrainian officials have said that 10 people were killed in a bombing of a bread line last week.

According to the United States, yes.

Secretary of State Antony Blinken said the U.S. made the formal determination after a "careful review" of public and intelligence sources.

Blinken said the U.S. would work with others to prosecute offenders. Neither Russia nor the U.S. recognizes the authority of the International Criminal Court at The Hague, but the U.S. could still assist a prosecution before the court, which is already investigating atrocities.

The announcement comes as U.S. President Joe Biden was headed to Brussels for talks with key allies, where he is expected to roll out new sanctions against Russia and coordinate more military assistance for Ukraine. As he departed Washington, Biden described the possibility that Russia could use chemical weapons in Ukraine as a "real threat" and said it's an issue that world leaders will discuss at the NATO summit.

Meanwhile, European Union nations on Wednesday signed off on another 500 million euros ($550 million) in military aid for Ukraine.

How many Russian and Ukrainian troops have died?

An exact figure has been hard to pinpoint, as official numbers have not been regularly released by either country.

NATO estimated Wednesday that 7,000 to 15,000 Russian soldiers have been killed — the alliance’s first public estimate on Russian casualties since the war began. A senior NATO military official said that estimate was based on information from Ukrainian officials, what Russia has indicated and intelligence gathered from open sources. The official spoke on condition of anonymity under ground rules set by NATO.

Russia has released little information. Back on March 2, Russia said nearly 500 soldiers had been killed and almost 1,600 wounded.

The most recent figure for Ukraine’s military losses came from Zelenskyy on March 12, when he said that about 1,300 Ukrainian servicemen had been killed in action.