KYIV, Ukraine - Russian forces are pounding Ukrainian cities and edging closer to the capital, Kyiv, in a relentless bombardment that keeps deepening the humanitarian crisis in this war, now in its third week.

Still, a narrow diplomatic channel remains open, with more talks between the two sides taking place Tuesday. Russia is also circulating a proposed U.N. Security Council resolution proposing a cease-fire to evacuate civilians, and to create safe passage for humanitarian aid. From the besieged port city of Mariupol, a convoy of around 2,000 civilian vehicles left along the so-called humanitarian corridor on Tuesday, the city council said.

The war's human toll has been devastating — the number of Ukrainians forced to flee their country since the invasion started has now surpassed 3 million, the vast majority of them women and children. Thousands of soldiers and civilians are dead.

Fox News video journalist Pierre Zakrzewski was killed when the vehicle he was traveling in was hit by gunfire on Monday near Kyiv, the network said Tuesday. He was killed in the same incident that injured reporter Benjamin Hall, who remained hospitalized.

What is happening in Kyiv?

Fighting for Kyiv has intensified, with artillery fire echoing through the city. Russia launched a flurry of strikes that early Tuesday blew out windows and ignited a huge fire in a 15-story apartment building apartment in western Kyiv, spurring a frantic rescue effort.

Explosions around the city caused significant structural damage, with shockwaves from a blast tearing through the entrance of a downtown subway station that has been used as a bomb shelter.

Kyiv mayor Vitali Klitschko announced a new curfew for the city Tuesday, saying it would run for 35 hours. 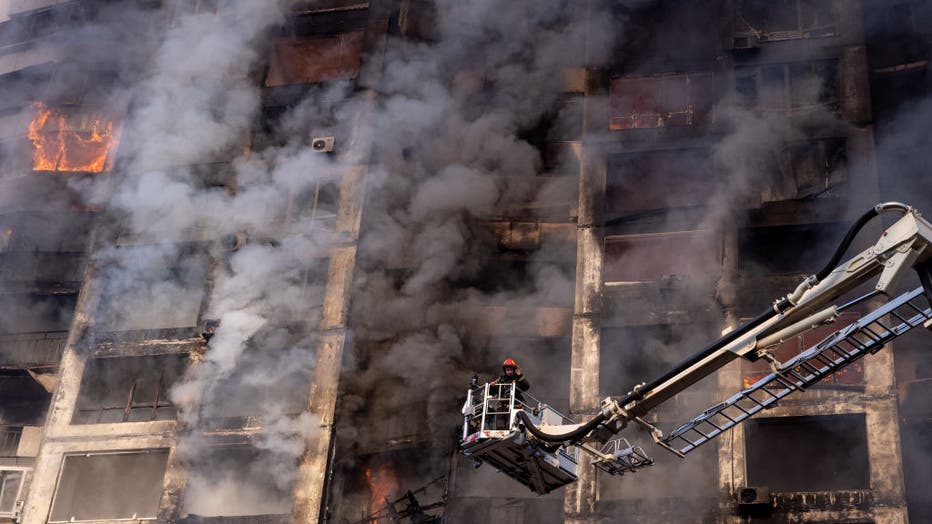 KYIV, UKRAINE - MARCH 15: Firefighters work to extinguish a fire at a residential apartment building after it was hit by a Russian attack in the early hours of the morning in the Sviatoshynskyi District on March 15, 2022, in Kyiv, Ukraine. (Photo by

What is happening in Mariupol, other cities?

After days of relentless Russian shelling of encircled Mariupol, 2,000 civilian vehicles left the port city along a so-called humanitarian corridor — a route that runs west for more than 260 kilometers (160 miles) to the Ukraine-held city of Zaporizhzhia. City officials advised drivers to spend the night along the route unless they were close to Zaporizhzhia by evening.

Mariupol had a population of 430,000 before the war. The strategically located port city has been under fire for more than two weeks. Local officials estimate the siege has killed more than 2,300 people and said it had left residents desperate for food, water, heat and medicine.

Aid groups have warned that large numbers of people could face starvation. Bodies are now being buried in mass graves.

Russian forces unleashed scores of new artillery strikes on downtown Kharkiv in the country’s east, hitting the city's historical center, including its main marketplace. Rescuers were pulling the bodies of dead civilians from destroyed apartment buildings.

Ukraine's parliament voted to extend martial law for another month, until April 24, meaning men between the ages of 18 and 60 are not allowed to leave the country in case they are needed to fight.

Pierre Zakrzewski, described as a veteran Fox News cameraman, has died after being injured alongside Fox News journalist Benjamin Hall on Monday. Fox News CEO Suzanne Scott said in a statement, "It is with great sadness and a heavy heart that we share the news this morning regarding our beloved cameraman Pierre Zakrzewski. Pierre was killed in Horenka, outside of Kyiv, Ukraine."

Flames gutted an apartment building in the Svyatoshynskyi district of western Kyiv as emergency workers climbed ladders to rescue people.

Thick, dark smoke choked the air. A firefighter at the scene confirmed one person had died and that several have been rescued alive — but more remained trapped inside. A young woman sobbed outside the charred building, where shocked residents assessed the damage.

"People are dying, and the worst thing is that children are dying," said Andriy, a firefighter at the scene who would only give his first name, before heading back into the burning building.

The war's burden has continued to fall heaviest on the most vulnerable. Over one million children have fled the country, and many more have been internally displaced.

What is the status of diplomacy?

Russia has circulated a proposed U.N. Security Council resolution demanding protection for civilians "in vulnerable situations" in Ukraine along with safe passage for humanitarian aid and people seeking to leave the country.

The draft resolution released Tuesday expresses "grave concern" for the deteriorating humanitarian situation and civilian casualties in and around Ukraine without mentioning Russia's responsibility for the war.

The resolution calls for a negotiated cease fire to evacuate all civilians. The draft could be put to a vote Wednesday, according to a Russian diplomate who was not authorized to speak publicly about the private discussions.

Meanwhile, Ukrainian negotiators were meeting with their Russian counterparts again on Tuesday after a brief pause.

The leaders of Poland, the Czech Republic and Slovenia were traveling Tuesday by train to Kyiv on an EU mission of solidarity.

What about sanctions against Russia?

The U.S. also placed additional sanctions on the leader of Belarus — Alexander Lukashenko — for allowing Russian President Vladimir Putin to use his country as a staging ground for attacks on Ukraine. New sanctions also target Lukashenko's wife, Halina.