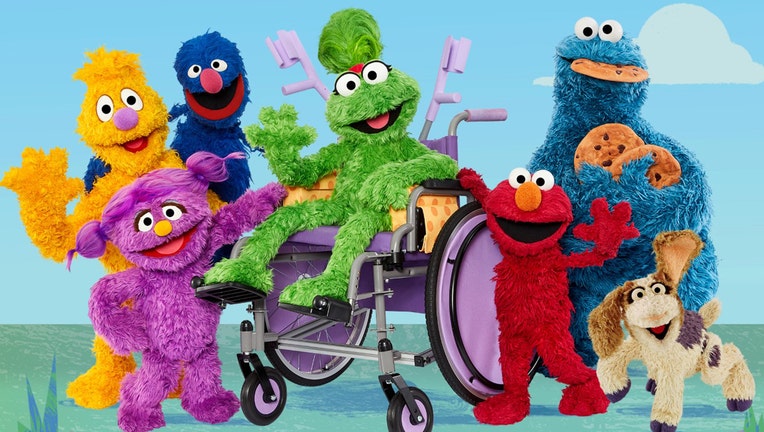 The new character, Ameera, is scheduled to premiere next week on “Ahlan Simsim” — the local version of “Sesame Street” in the Middle East and North Africa. (Credit: Sesame Workshop)

The new muppet, Ameera, is scheduled to premiere next week on "Ahlan Simsim" — the local version of "Sesame Street" in the Middle East and North Africa.

"A witty, inquisitive 8-year-old girl with a passion for science and basketball, Ameera uses her bright purple wheelchair or forearm crutches to get around due to a spinal cord injury," Sesame Workshop wrote in a press release. "She’s everyone’s favorite comedian, and her great sense of humor serves her well as a natural leader who encourages others with her bright personality. Sometimes, Ameera gets too wrapped up in her own ideas and forgets to notice everyone else’s, but she always remembers that play and learning are most fun when she includes her friends’ ideas too."

Sesame Street's Elmo will be adopting a new puppy to teach kids about safe behaviors while owning a pet.

Ameera makes her debut in season five of the show, which will focus on the social-emotional skills of kindness towards oneself and others.

The organization said the character was developed as part of its work to support children and families affected by crisis and displacement. Ameera will also star in globally tested videos designed to quickly deliver playful learning to children affected by conflict and crisis.

"Thoughtfully designed to challenge stereotypes and reflect children’s lived experiences, Ameera brings visibility to the more than 12 million displaced persons and 240 million children worldwide estimated to have a disability as well as to the important role of girls in STEM," said Sherrie Westin, President of Sesame Workshop. "At a time when more children than ever before are affected by conflict and displacement, Ameera also highlights the urgent need for creative and flexible approaches to delivering playful learning and early education to communities affected by crisis."

Ameera will join her other familiar muppet friends on the show including Elmo, Gargur (Grover) and Kaki (Cookie Monster).

"Ameera continues Sesame Workshop’s long history of creating diverse characters that children around the world can relate to, and we are so excited to welcome this exuberant 8-year-old girl to our cast of beloved Sesame Muppets," said Scott Cameron, Head of International Production at Sesame Workshop. "Ameera was in development for over two years and was designed with the guidance of inclusion advisors who helped ensure that her identity, movements, and equipment were representational. An instant favorite with our writers for humor and wit, we know that Ameera will inspire young viewers to be curious and confident."

She is Korean American and has two passions: rocking out on her electric guitar and skateboarding. She was formally introduced in "See Us Coming Together: A Sesame Street Special." Simu Liu, Padma Lakshmi and Naomi Osaka were among the celebrities to appear in the special.