Bob Crippen, who flew the first space shuttle mission in 1981, says it will be a long time before we see another spacecraft as 'magnificent' as the shuttle. Video via NASA.

CAPE CANAVERAL, Fla. - It’s now been 40 years since the maiden flight of space shuttle Columbia, the first flight of a reusable spacecraft and the inaugural mission of the 30-year space shuttle program.

Commander John Young and pilot Robert Crippen lifted off from Kennedy Space Center at 7 a.m. on April 12, 1981, coincidentally 20 years to the day after Yuri Gagarin became the first person to fly in space.

For two days the men tested out their new craft – opening the giant payload bay doors, firing the onboard maneuvering engines, and testing the orbiter’s thermal tiles, meant to protect the craft and the astronauts from the heat of reentry. 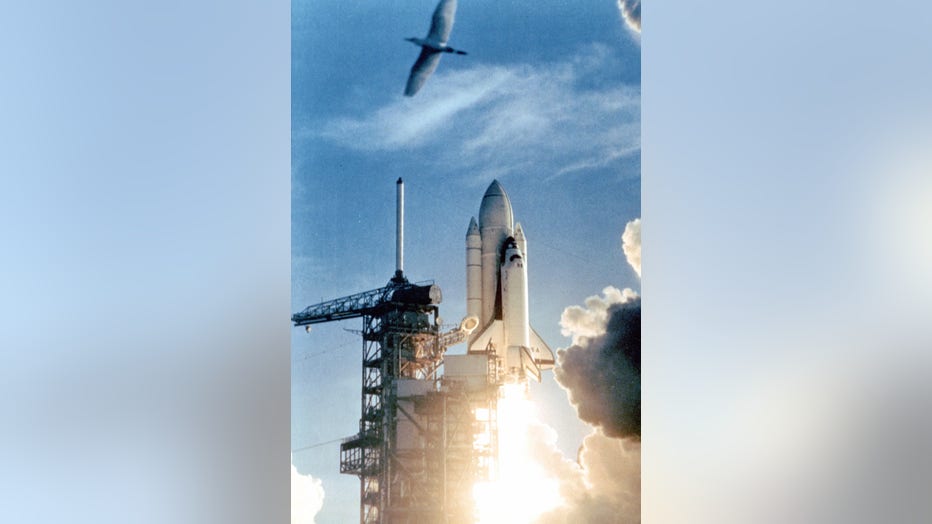 The first orbital mission of the Space Transportation System lifts off from the Kennedy Space Center on April 12, 1981. NASA photo.

The tiles had never been tested in orbit before, and many of them had famously fallen off Columbia during its ferry flight to Florida from the factory in California. In orbit, Young and Crippen noticed that some tiles on the maneuvering engine pods had fallen off, and while that was not a critical location, it gave them concern about the more important tiles on Columbia’s underbelly.

The craft survived reentry and glided to a landing at Edwards Air Force Base in California – the first Florida landing would not come until 1984.

Engineers later discovered minor reentry heat damage in one of the landing gear wheel wells and the connection spot for the external fuel tank. But overall, the mission was considered a success – especially since NASA had never flown a crewed test flight before.

The space shuttle program continued for just over 30 years, with Challenger, Discovery, and Atlantis joining the fleet before Challenger’s destruction in 1986. Endeavour was built as a replacement; together, the five orbiters completed 133 flights before being retired in 2011.

Columbia ultimately completed 27 of those missions before being destroyed on its 28th flight in 2003, taking the lives of seven astronauts. 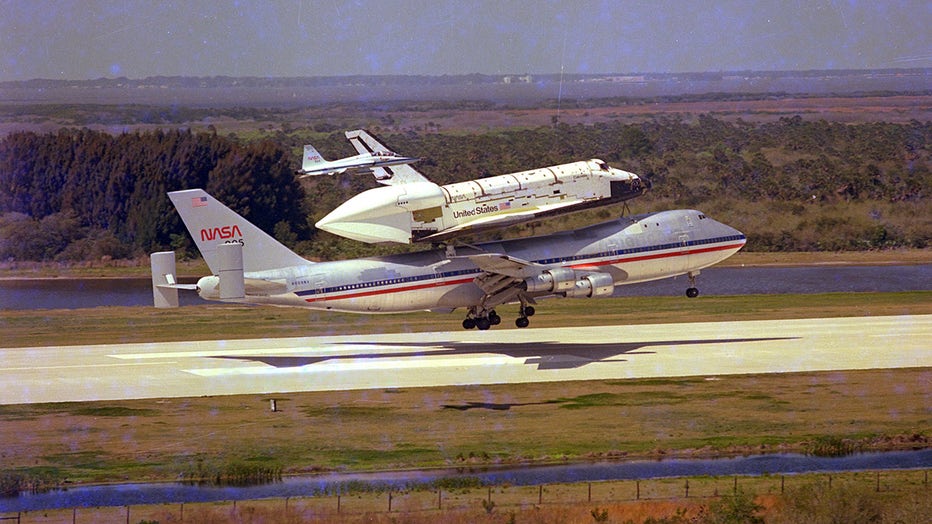 Riding piggyback on its 747 carrier aircraft, space shuttle Columbia is only seconds away from a touchdown at Kennedy Space Center's Shuttle Landing Facility, completing its 2,400-mile ferry flight from Dryden Flight Research Center in California. Im 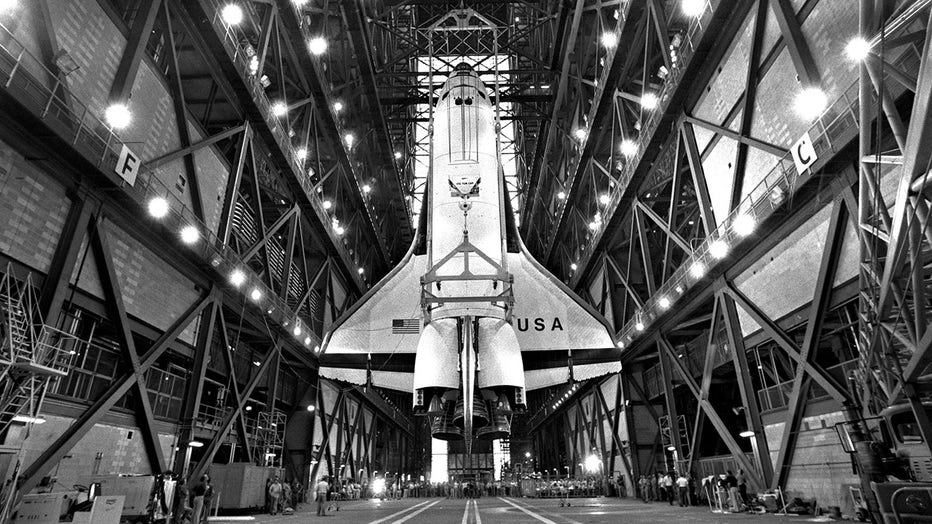 Space shuttle Columbia is suspended inside the transfer aisle of Kennedy Space Center's Vehicle Assembly Building. Operations were under way to lift and mate the spacecraft to its external tank and solid rocket boosters. Image credit: NASA/KSC, Nov. 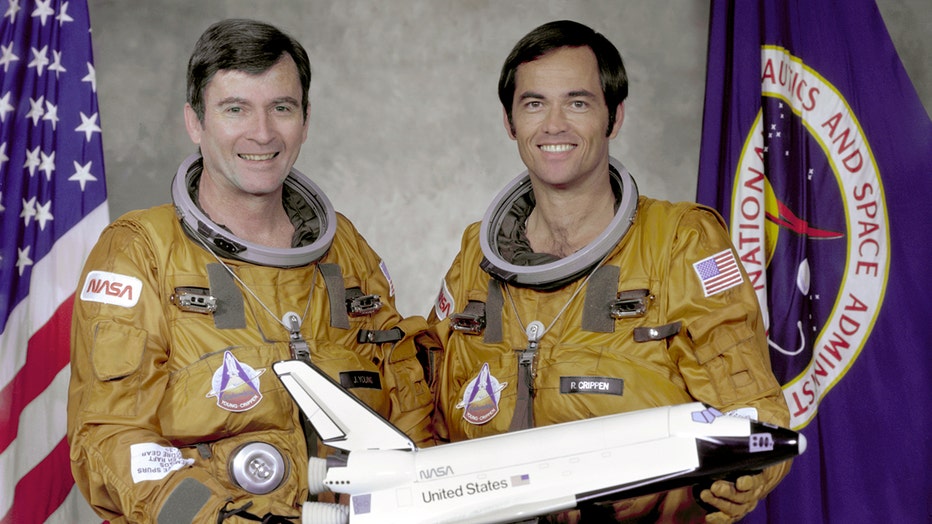 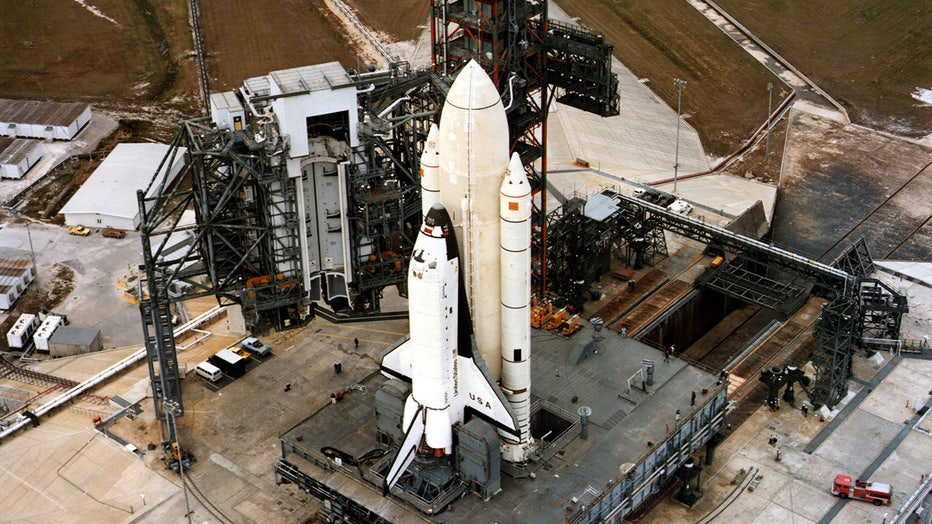 A pre-launch Columbia on the crawler transporter, making its way from the Vehicle Assembly Building to the launch pad at the Kennedy Space Center. NASA photo. 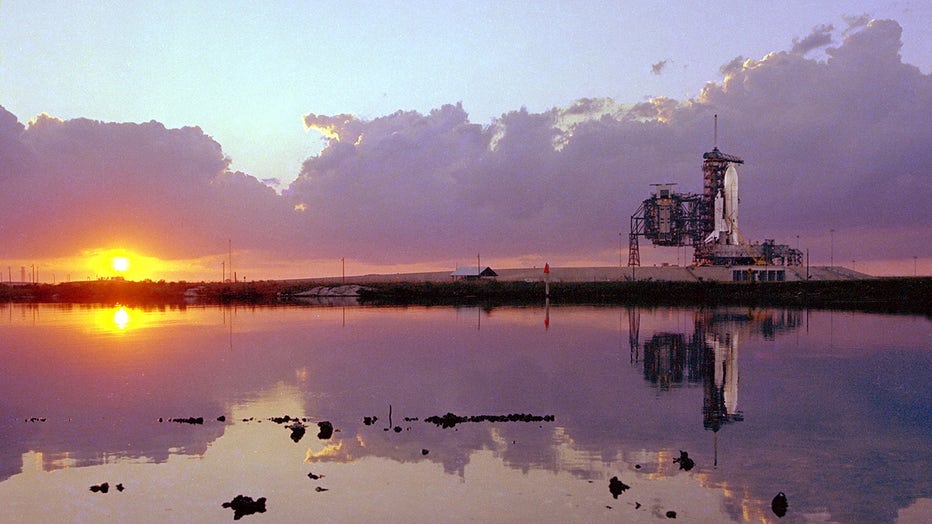 Dramatically reflected by the waters of the extensive lagoon system adjacent to Launch Pad 39A, space shuttle Columbia, is lighted by spotlights and the setting sun on the evening prior to flight-readiness firing of Columbia's main engines. Image cre 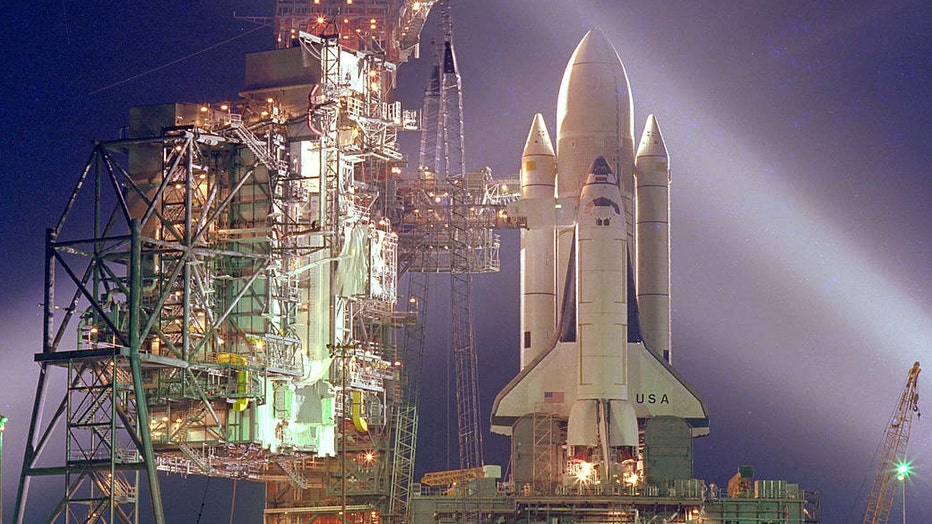 In this timed exposure of STS-1, at Launch Pad A, Complex 39, turns the space vehicle and support facilities into a night- time fantasy of light. Structures to the left of the shuttle are the fixed and the rotating service structure. 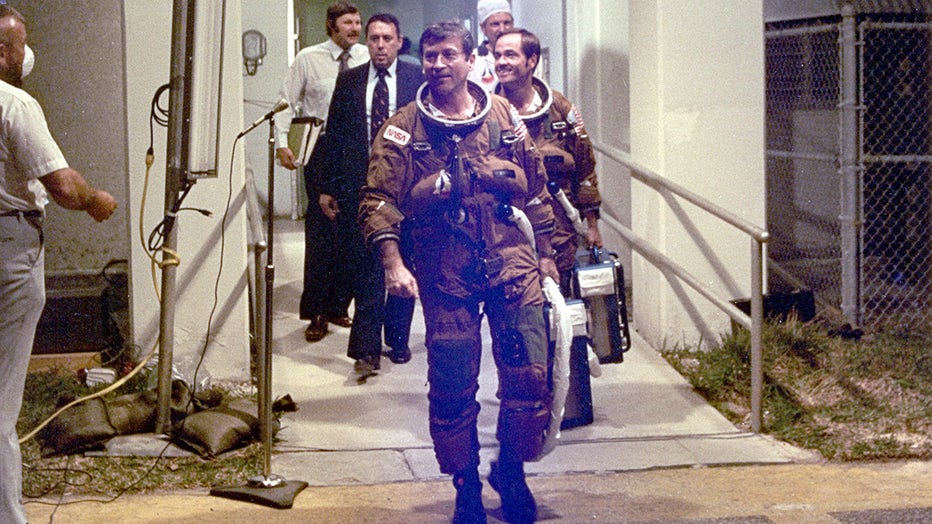 Young is followed by Crippen as the two men make their way from the Operations and Checkout Building to Pad 39A on April 12, 1981. NASA photo. 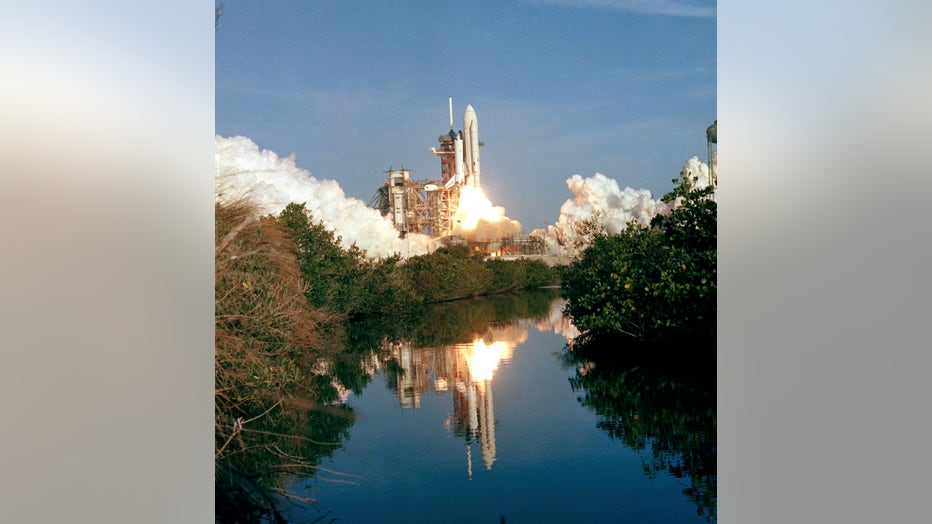 The roar of the Space Shuttle's engines breaks the calm of the Florida coast during the liftoff of STS-1. NASA photo.

The first orbital mission of the Space Transportation System lifts off from the Kennedy Space Center on April 12, 1981. NASA photo. 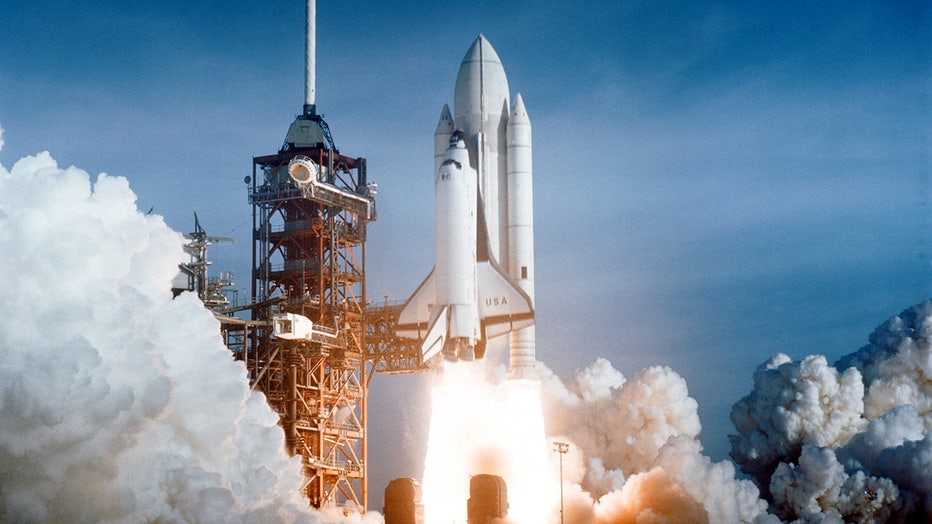 The Shuttle's recognizable, orange external fuel tank is seen here painted white. The coating was used for the first two missions into space, but later dropped to save weight. NASA photo. 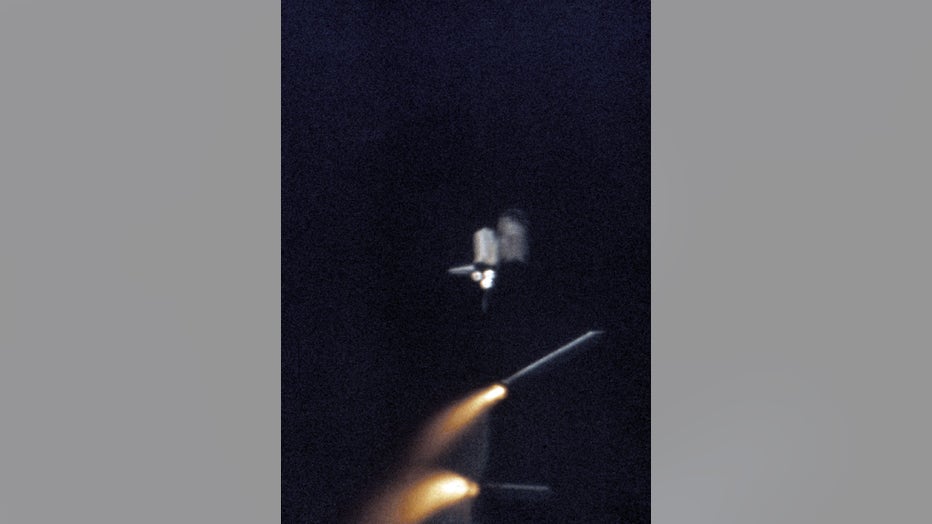 The Shuttle's Solid Rocket Boosters break away from Columbia's External Tank and fall to Earth about two minutes after liftoff. NASA photo. 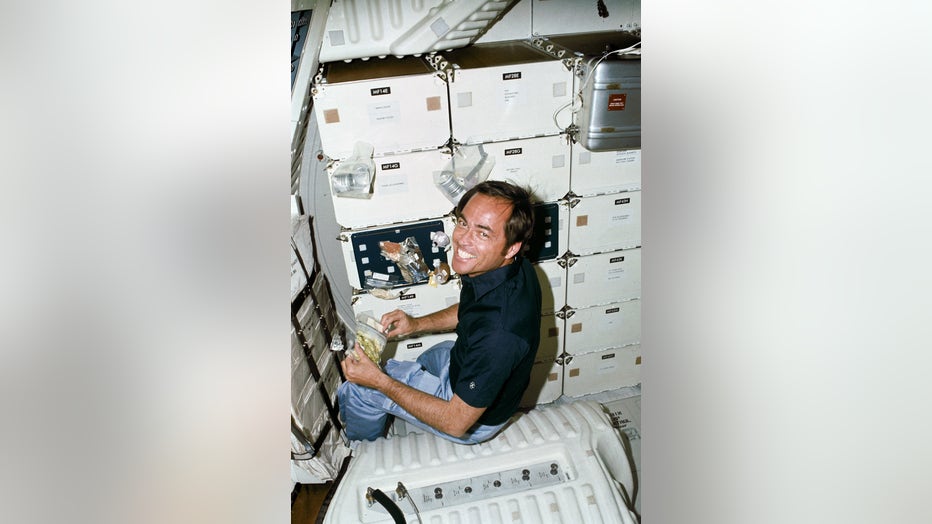 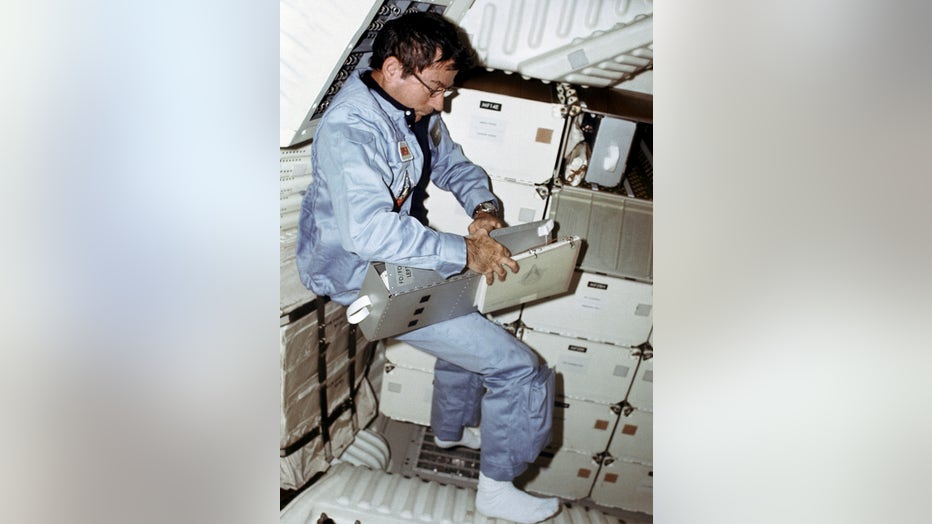 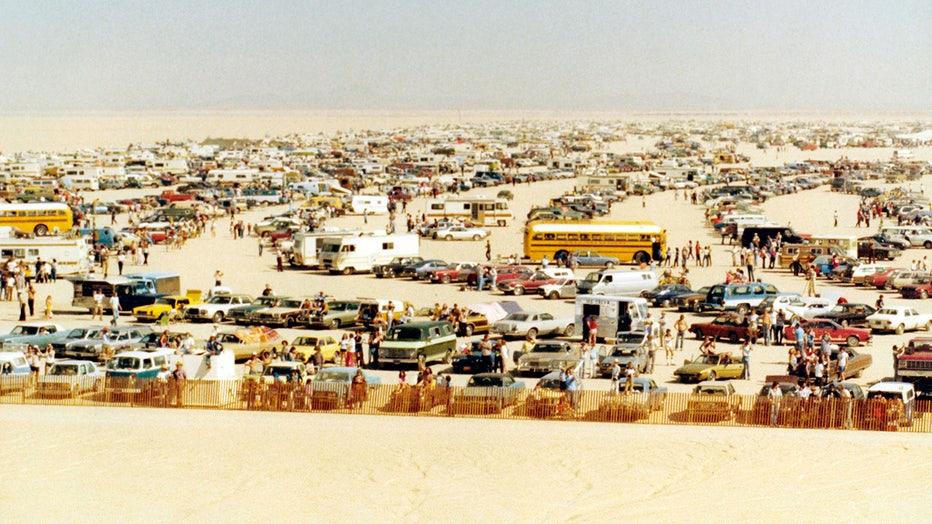 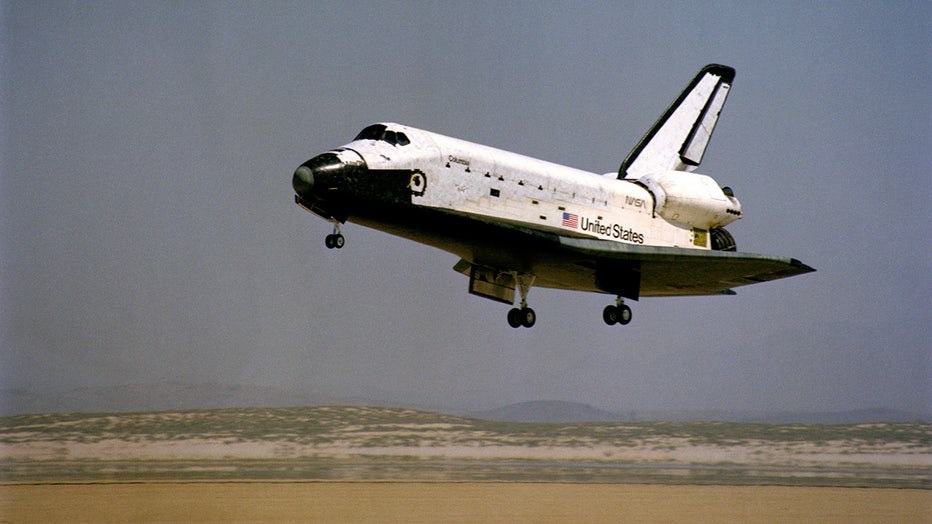 Columbia seen in flight moments before touchdown at Edwards Air Force Base on April 14, 1981. NASA photo. 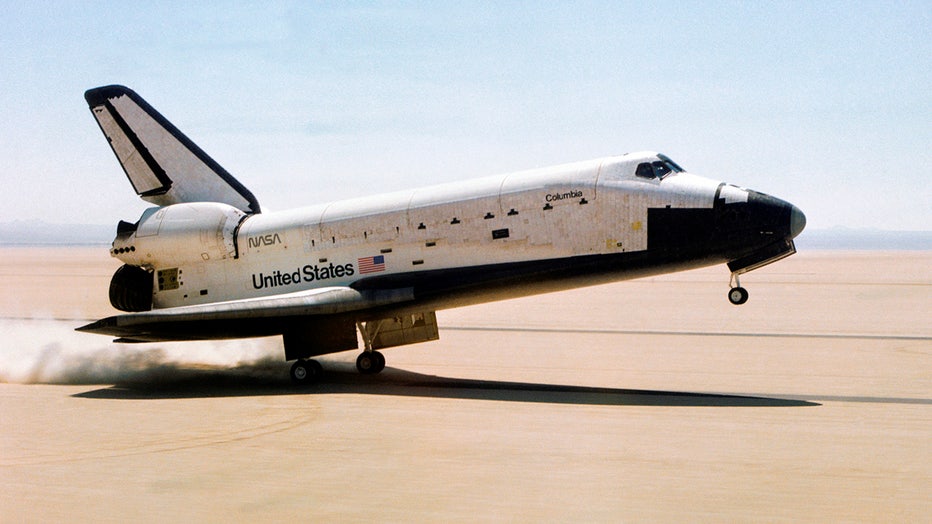 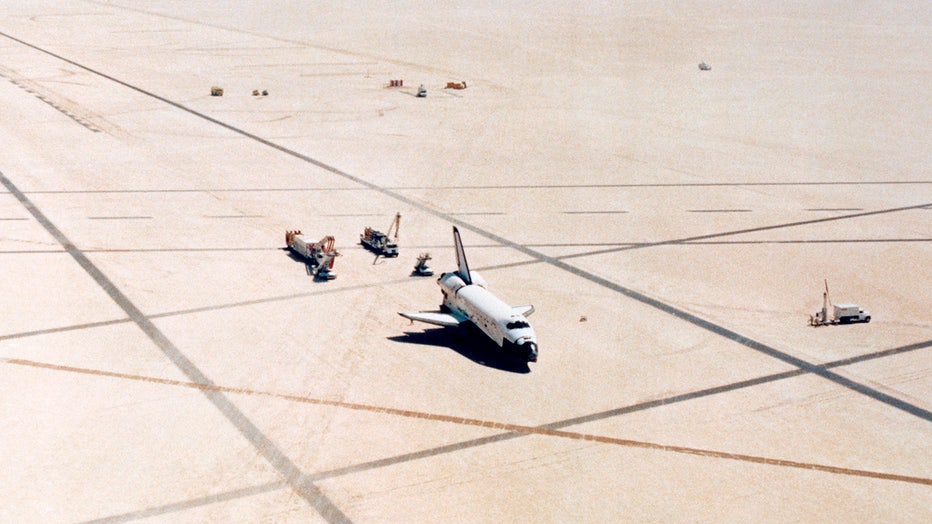 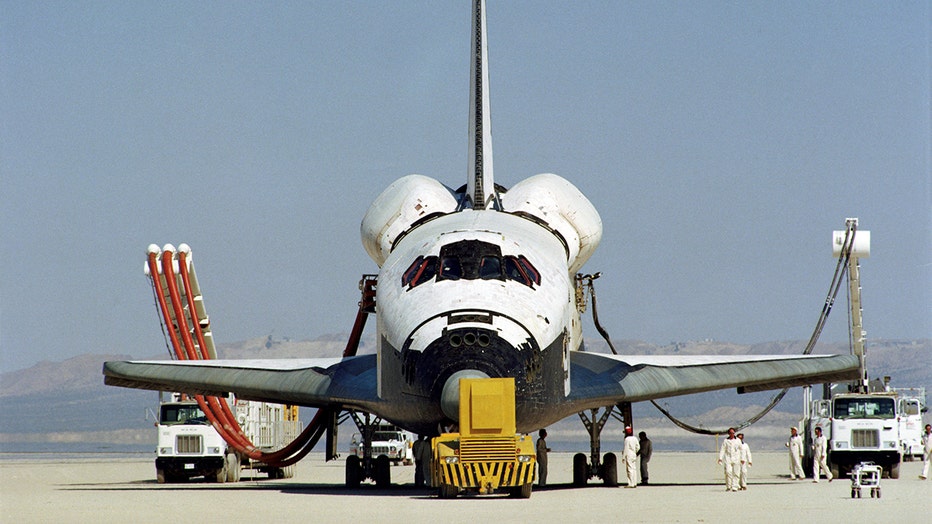