AUSTIN, Texas - The Austin Police Department has arrested a suspect in a deadly home invasion in East Austin. 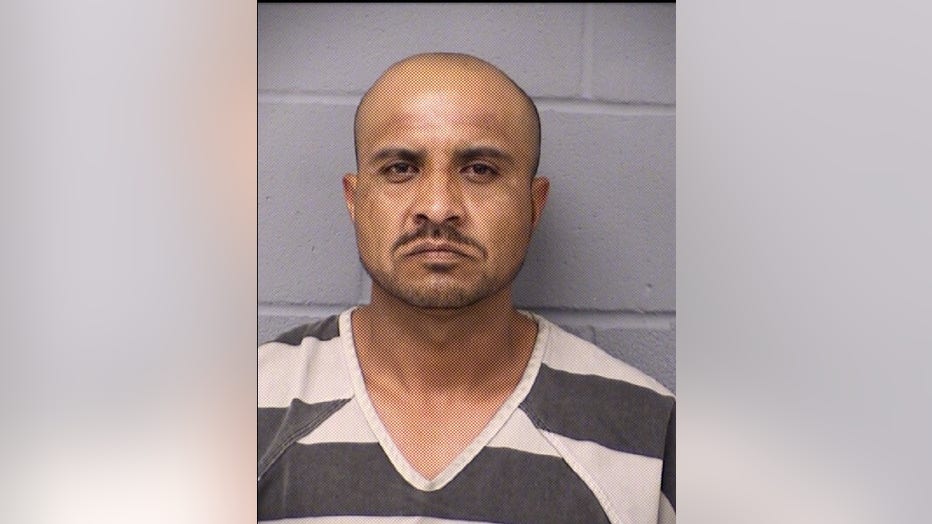 An arrest affidavit says officers were called to a duplex on Pecan Springs near Manor Road just before 8 a.m. Sunday morning, where they found someone lying unresponsive with multiple stab wounds in the driveway and two residents inside suffering from gunshot wounds.

The person in the driveway was one of three robbers who tried to make their way inside the victims' home. He was transported to Dell Seton Medical Center where he was pronounced dead, says the arrest affidavit. The two residents were transported as well to Dell Seton.

Officers secured the scene and numerous witnesses identified a champagne or tan-colored four-door sedan leaving the scene at a high rate of speed, according to the affidavit. A neighbor's Ring doorbell camera captured video of a sedan matching that description driving away just after the shooting.

One of the residents told a detective that he had come home and found the other resident being held at gunpoint by three Hispanic males, says the affidavit. He told officers the men were yelling and told both of them to get on the ground. They took his wallet and cell phone and approximately $600 in cash.

One resident grabbed a knife and began stabbing one of the suspects. Another suspect fired a shot in his direction, and the arrest affidavit says he suffered at least one gunshot wound to the torso.

When APD officers arrived they found one person unresponsive and started CPR.

Around 8:40 a.m., an unidentified Hispanic male arrived at Ascension Seton Main with a passenger that had two stab wounds to his torso, says the affidavit. The driver gave the injured man's wallet to security. The man was eventually transported to Dell Seton where the affidavit says he is currently still being treated.

An officer there thought the man was possibly involved with the homicide investigation, so when he found out the man's wife had come to the hospital, he called her and she agreed to come back and was interviewed, according to the affidavit. The man's wife told detectives that she had received a call from her husband's phone, but from a friend who said he was in the hospital for stab wounds.

The friend told her that they had been drinking in front of an apartment complex on Wheless Lane around 8:30 a.m. when they were approached by two Black males who demanded money. The men fought and the friend said her husband had been stabbed, says the affidavit.

The friend told her that he had called 911, but that they couldn't understand Spanish so he drove her husband to the hospital. The officer checked with dispatch and found that no 911 calls had been made that resembled what happened. The affidavit says Austin 911 employs numerous Spanish-speaking dispatchers that would have been able to help.

The wife told detectives that she didn't know the friend's name, but that her brother might know. Her brother, when called, said he only knew his first name, "Raul," says the affidavit.

Video footage obtained from Ascension Seton Main showed a gold Volkswagen sedan with black stripes running from the hood to the back of the trunk. The video showed a Hispanic male getting out of the driver's seat and approach nurses, then with security and nurses, get a passenger out into a wheelchair, says the affidavit.

A search of the front license plate identified Luevano-Munoz from an APD traffic stop in April. He was taken into custody near where the robbery happened, according to the affidavit. During an interview with detectives, he was confronted with some of the evidence gathered at the scene and admitted he was there when the robbery occurred.

He told detectives the deceased man had been the one to come up with the robbery idea, and the injured man needed money, but that all three had been holding guns when they entered the home, says the affidavit.