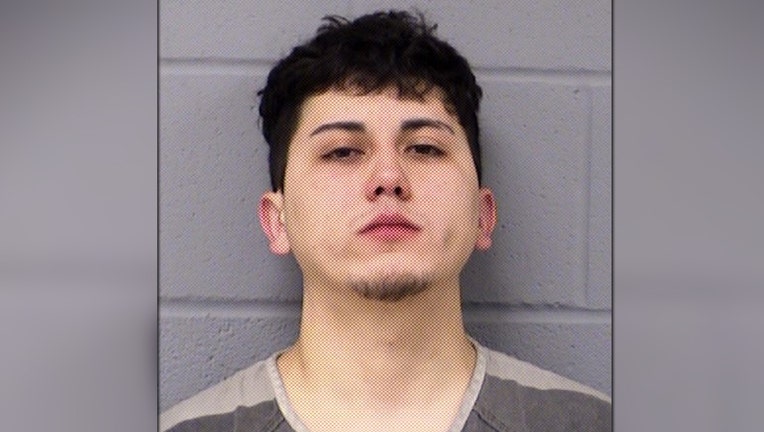 AUSTIN, Texas - A driver hit and killed a pedestrian who was crossing the street with a shopping cart and continued to drive for a half a mile before pulling over and walking away from the accident. Officers reportedly found the driver later at the South Austin Beer Garden.

24-year-old Paul Joseph Garcia Jr. has been arrested and charged with intoxication manslaughter, a second-degree felony.

According to police, officers were dispatched to the 10000 block of Menchaca Road around 10:30 p.m. on Saturday, February 15 for reports of an auto-pedestrian accident. When officers arrived at the scene, they observed a field of debris in the right lane of traffic that continued southbound on Menchaca Road. Officers followed the debris for half a mile and were able to locate the 2014 white Ford Focus and pedestrian involved in the crash.

Inside the vehicle, officers found the pedestrian. The force of the impact had caused the pedestrian to penetrate the windshield and fully enter the vehicle's passenger seat, according to the affidavit. The pedestrian had traumatic injuries to his head and extremities, some of which had been detached and left in the roadway. The pedestrian was declared dead at the scene and has not been identified at this time.

Officers also observed in the affidavit that the roadway showed no evidence of the vehicle braking prior to or after the crash.

Officers spoke with witnesses who reported seeing the Ford strike the pedestrian at the intersection of Slaughter Lane and Menchaca Road. The pedestrian was reportedly pushing a shopping cart at the time of the crash and the impact of the crash pushed the cart into a cluster of mailboxes with enough force to bend a steel post two inches.

The driver, Paul Joseph Garcia Jr., was located a short time later at the South Austin Beer Garden in the 10700 block of Menchaca Road. When officers made contact with him, they noted blood evidence and other debris on him that correlated with the blood and body tissue found in his vehicle.

Garcia was not served alcohol at the beer garden, according to the affidavit. Officers determined that Garcia's intoxication and the dangerous manner in which he was driving led to the pedestrian's death.

Garcia has been charged with intoxication manslaughter, a second-degree felony.