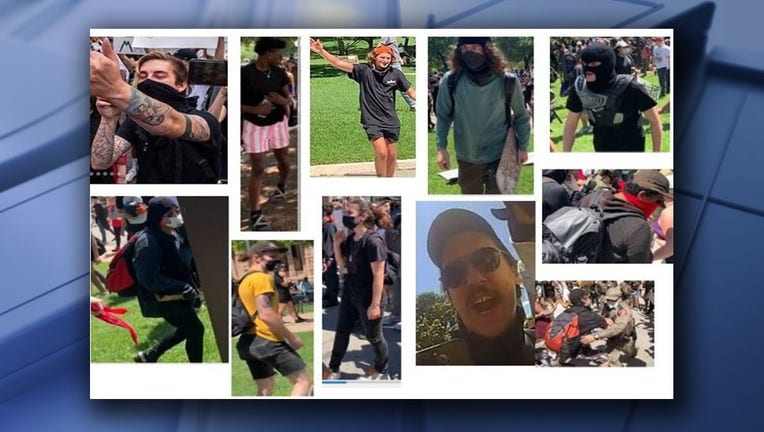 AUSTIN, Texas - The Texas Department of Public Safety (DPS) is seeking the public’s help in locating 10 people involved in crimes during protests that led to rioting at the Texas State Capitol on May 30, 2020.

According to Texas DPS, the 10 unidentified individuals are wanted on misdemeanor and/or felony charges, including "riot, criminal mischief (vandalism), assault on a public servant, attempting to take a weapon from a peace officer and interfering with public duties."

Texas Crime Stoppers is offering cash rewards of up to $1,000 for information that leads to the identification and arrest of any of the 10 individuals who may be charged with a felony.

The organization will also pay $500 for information that leads to the identification and arrest of any individual charged with a misdemeanor.

Texas Crime Stoppers, which is funded by the Governor’s Criminal Justice Division, have already arrested seven individuals on felony or misdemeanor charges in connection to "a variety of crimes that occurred during the protests."

To be eligible for cash rewards, tipsters MUST provide information to authorities using one of two methods:

Texas DPS says that the images shared were gathered by DPS agents and crime analysts during a lengthy investigation.

"All tips are anonymous regardless of how they are submitted, and tipsters will be provided a tip number instead of using a name," Texas DPS shared in a press release.