ARLINGTON, Texas - An entire community in Texas rallied together to save a 15-year-old deaf dog that had fallen down a storm drain and was trapped for two days.

Andrea Tankersley, the dog’s owner, told WFFA "people were hearing animal sounds, but they were hearing them all over the neighborhood."

The dog, Zoey, was finally discovered on Saturday stuck in a drainage pipe. The Arlington Fire Department, police, paramedics and other workers worked around the clock to tear up the street to rescue her.

AFD has released video footage of the dramatic 10-hour rescue operation that involved multiple agencies from the City of Arlington. Community members had also helped out by delivering water and pizza to the workers.

In the video, rescue crews can be seen tearing deeper into the earth until hitting the pipeline where Zoey was trapped.

A firefighter reportedly suggested that a skateboard would be useful in getting the dog out of the pipe. That’s when a local kindergartner, Hunter, offered his.

"He was just so enthusiastic about helping us," police officer Kristi Weill told WFFA. "It was just so heartwarming." 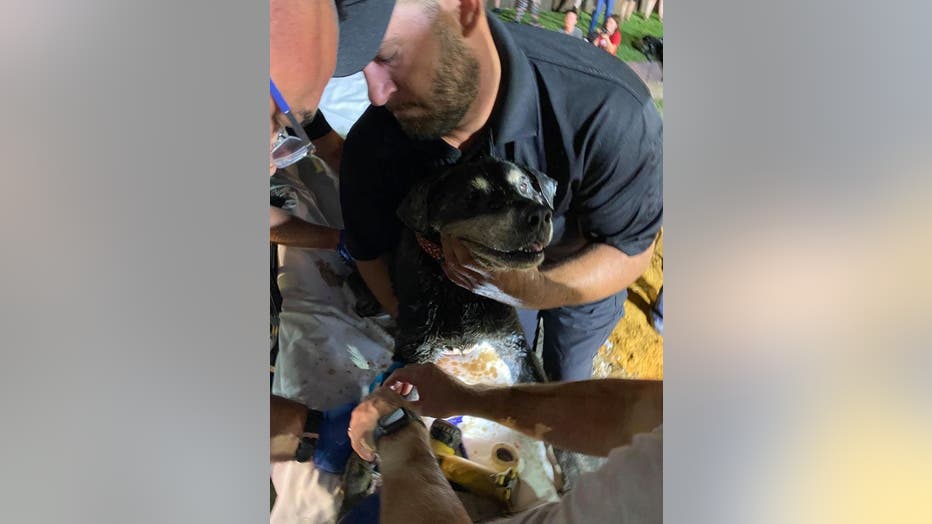 Zoey had been trapped in the strom pipe for two days. (Arlington Fire Department)

Rescue crews used the skateboard to get Zoey out. Video footage and pictures show the dog caked in mud, looking disoriented as she’s pulled to safety.

"Everyone has been so helpful," officer Weil added. "There have been cheers of joy, and tears when Zoey was rescued. And I love seeing the community turn out and cheer a successful end to this."