Thursday afternoon, in front of members of the Texas State University police department, Crow shared the facts about naloxone and the myths.

SAN MARCOS, Texas - A Texas woman is traveling across the state training first responders and community members on how to properly use naloxone, a medication that can reverse opioid overdoses.

Callie Crow’s goal is to speak in front of every single law enforcement officer in Texas.

Thursday afternoon, in front of members of the Texas State University police department, Crow shared the facts about naloxone and the myths. For example, there are zero confirmed reports of any first responders dying from a fentanyl exposure while helping someone who overdosed. It's a common misconception.

She also shared real stories. For Crow, this training is personal, in more ways than one.

"He lived for 36 hours in the ICU before he passed away," said Crow, referring to her son, Drew.

A first responder herself, Crow had to watch her 27-year-old son die from a fentanyl overdose in 2020.

"I don't think anybody can prepare for that, even being exposed to as much as I have been exposed to over my career," said Crow, who has been in EMS for almost thirty years. "It's a different sort of pain and level of intensity."

The DEA has issued alerts after recent suspected overdoses and deaths involving fentanyl in children in Hays County.

And as a paramedic, this kind of tragedy was never something she could fully distance herself from.

"My very first day back after my bereavement leave, my very first call was a 27-year-old overdose," she said. "At first I took it as, maybe this is my sign that I cannot do this anymore…but I thought, I'm going to use this as momentum, I'm going to see this as my sign to go forward with this."

She decided to stay in her career, and she decided to take it a step further. That year, she founded Drew’s 27 Chains, an organization that raises awareness of opioids and the role that naloxone can play in saving lives.

When she’s not physically responding to overdose calls as part of her day job, Crow is traveling around the state of Texas to hold naloxone trainings. She’s specifically passionate about law enforcement. So far, she’s visited about 60 departments.

"This should be in the main course of their training, and it's not, and the more I saw that, the more I realized that the need for this is huge," she said. "They may have the product on their belt, but the training is not there, and that's where I come into play."

Texas State University Police Chief Michael Carmichael said this is the first time his force has received this kind of training, and from now on, each officer will be equipped with naloxone.

"We have 38,000 students and on most campuses across the country, the first person that arrives on a medical call is the campus police, not because EMS is slow, it’s just because we’re there," said Chief Carmichael.

He said they had naloxone on hand when he worked for the University of Oregon, and they averaged about six saves a year.

"So I know the benefit, and it’s just a blessing to have this here today," he said.

During the training, Crow demonstrated how to use two nasal spray forms of naloxone, Kloxxado and the more commonly known, Narcan. However, she recommended a newer, injectable form of naloxone called ZIMHI. She also provided doses of ZIMHI to the Texas State University police department. 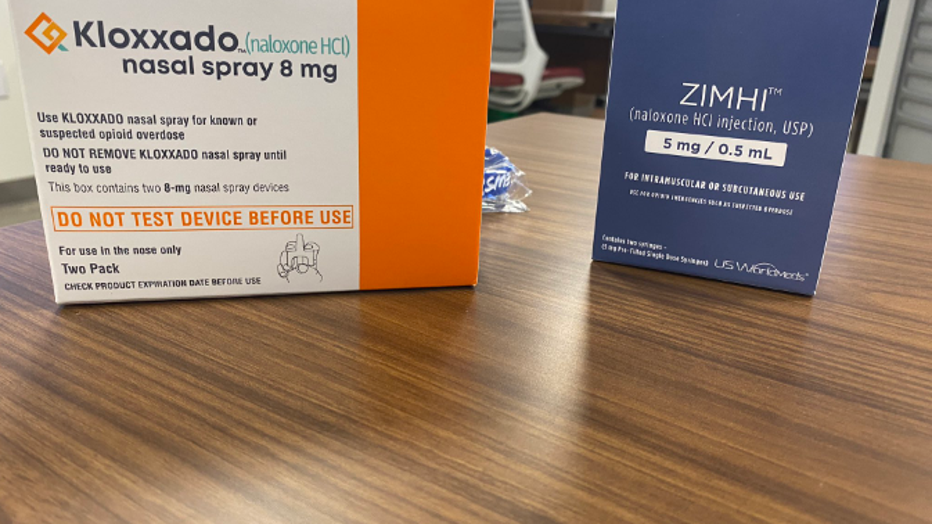 A Texas woman is traveling across the state training first responders and community members on how to properly use naloxone, a medication that can reverse opioid overdoses.

Crow’s work is difficult, but she’s been keeping track of the positive outcomes. She said she’s counted 36 lives in the past 18 months that have been saved because of her training and distribution of naloxone.

"Two weeks ago, I had a crew leaving a scene of an overdose, and they were calling me so ecstatic that they got to use their naloxone and their training, and the person was awake and talking when they left," said Crow. "I think it's amazing, and I don't expect it to stop…I'd love to be out of this, that this organization never had to be, but it's needed, and right now we're going to take it on."

Those seeking out free naloxone can reach out to the Texas Harm Reduction Alliance. Walmart and pharmacies, like Rite Aid and Walgreens, will provide naloxone as well. Insurance may cover it.

To learn more about Drew’s 27 Chains and request a training or naloxone, click here.