The purpose of The 38 Challenge is for people to intentionally place themselves in 38 minutes of extreme conditions to draw attention to a silent problem in our community, which is mental health and people taking their own lives.

FORT WORTH, Texas - Suicides, especially among veterans, have been increasing.

An event at Texas Christian University Saturday, called The 38 Challenge, hopes to shatter the stigma around mental health issues in order to prevent suicides.

The purpose of The 38 Challenge is for people to intentionally place themselves in 38 minutes of extreme conditions to draw attention to a silent problem in our community, which is mental health and people taking their own lives.

"Thirty-eight minutes of suffering, people in society voluntarily putting themselves in an uncomfortable situation and leaning on one another," explained Brandt McCartney, with the 38 Challenge.

This is the second year of The 38 Challenge at TCU's Amon Carter Football Stadium to draw attention to those suffering silently who feel they have no one to lean on, like McCartney's brother.

"The 38 Challenge is in memory of my brother, Captain Matthew Brewer, who died by suicide a little over a year ago," he said.

Brewer wore #38 as a linebacker at the Naval Academy, before becoming an officer in the Marines.

He was a captain when he took his life, from what the organization believes was a combination of PTSD and brain injury.

The 38 Challenge is an extreme workout.

Hall of Famer Troy Aikman is all in.

"It's a pretty grueling workout, but it’s intended to bring some awareness and also some much-needed funding for brain injury and to eliminate the stigma of mental health," the former Cowboys said in a promotional video.

The 38 Challenge is the only warrior workout to honor a soldier who took his own life due to his service rather than dying on the battlefield.

"And that number, by 2030, is going to be roughly 30 times larger, the number of veterans who died by suicide, 30 times greater than the number who have died on the battlefield," McCartney added. 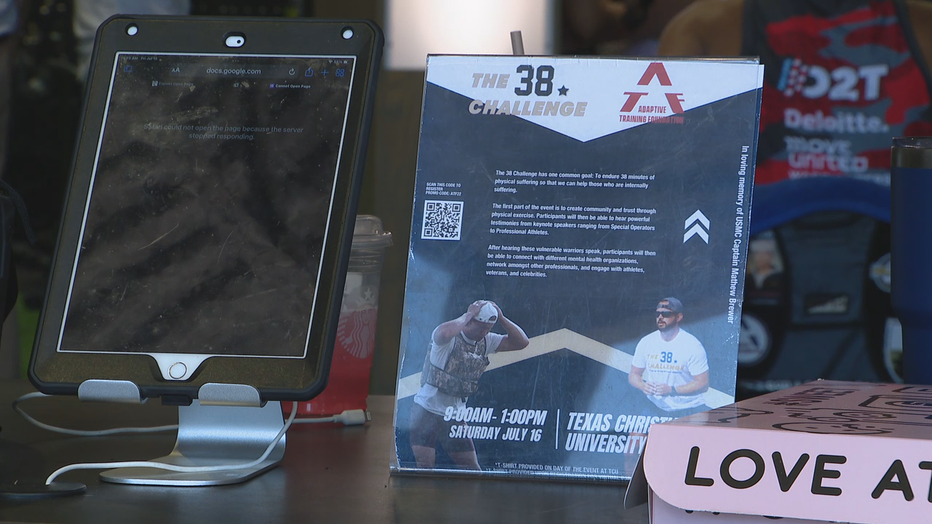 The Adaptive Training Foundation takes people who have physical disabilities and trauma through a nine-week exercise building physical and mental strength, and lifting the mental health weights with 38 Challenge.

"Being forward focus in mental health, but using that sweat to galvanize," Vobora explained. "I say this a lot, it's a way to get out what you don't know how to say."

Not just for warriors, but the whole of society.

"We're taking the trauma in my family and my life, losing my best friend and my brother, but we're turning it into inspiration and we're turning it to shatter the mental health stigma," McCartney said.

The big hope is that through The 38 Challenge and other groups working to draw attention to mental health and suicide, that one day suicide for many won't be the way out.