Transportation details on how to get to Austin FC's Q2 Stadium

FOX 7 Austin's Tierra Neubaum gets information on what transportation you should take when going to watch matches.

So if you're planning on heading to watch the inaugural match, here are some options so that you'll be spending time in the stands and not in traffic.

With the first home game around the corner, Routes 3, 383, & 392 and rail at Kramer Station will be fans’ best bet for public transportation.

Public transportation is the main mode of transit officials would like those heading to the game to take. Capital Metro has several options.

FOX 7 Austin's Tierra Neubaum has a look at the stadium as it gets ready to host its first Major League Soccer match.

You can take the MetroRail to arrive at Q2 Stadium. Once at Kramer Station, fans should follow the signs leading to the stadium for the safest, most accessible, and optimal walking path.

Officials have the following safety tips if you do take MetroRail: 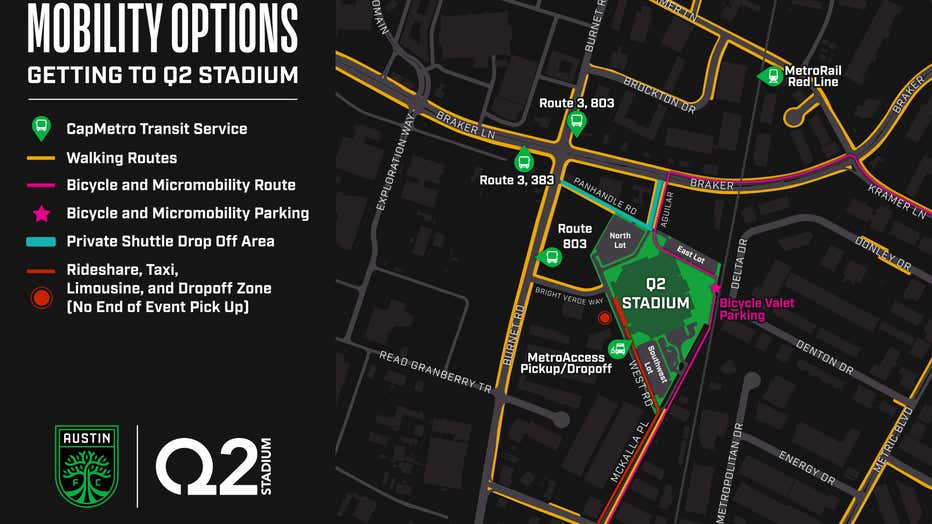 If fans don’t live near a route that goes to Q2, there are four recommended Park & Ride locations with routes to the stadium:

For more information on how to travel to and from Q2 Stadium, visit Capital Metro's website.

Those choosing to take a rideshare like Lyft or Uber will take it to a dedicated rideshare drop-off point on the west side of Q2 Stadium and post-match pick-up areas north and south of the stadium on Brockton Drive and Rutland Drive.

Even before, fans were pregaming with excitement to not only enjoy the match but be inside Q2 Stadium for the first time.

Austin FC has invested in a bicycle valet system free to fans to make biking to Q2 Stadium as convenient as possible. Fans will be able to valet their bicycle on the east side of Q2 Stadium.

Everyone is encouraged to secure parking in advance of heading out to Q2.

There is no fan parking in the neighborhoods east of the stadium.