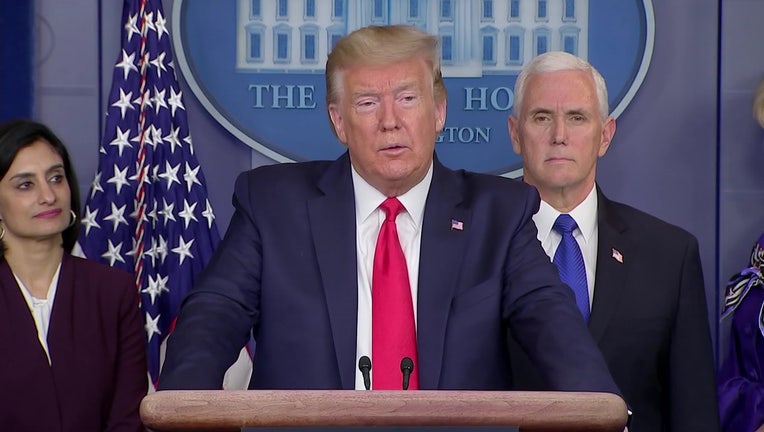 WASHINGTON - Managing dual health and economic crises, President Donald Trump announced Wednesday that he will invoke a federal provision that allows the government to marshal the private sector in response to the coronavirus pandemic.

Trump, now describing himself as a “wartime president,” said he would sign the Defense Production Act “in case we need it" as the government bolsters resources for an expected surge in cases of the virus.

Trump also said he will expand the nation's testing capacity and deploy a Navy hospital ship to New York City, which is rapidly becoming the epicenter of a pandemic that has rattled the U.S. economy and rewritten the rules of American society. A second ship will be deployed to the West Coast.

The president also said the Housing and Urban Development Department will suspend foreclosures and evictions through April as a growing number of Americans face losing jobs and missing rent and mortgage payments.

The announcements came on a fast-moving day of developments. The Senate was taking up a financial aid package while the administration pushed forward its economic relief plan, which proposes $500 billion in checks to millions of Americans, with the first checks to come April 6 if Congress approves the plan.

Trump and Canadian Prime Minister Justin Trudeau jointly announced that the U.S.-Canada border would be closed, except for essential personnel and for trade, as the nations try to reduce the spread of a virus afflicting people in both countries.

Trump dismissed talk from his own treasury secretary, Steven Mnuchin, who suggested that the nation could face 20% unemployment at least in the short term.

The administration has told Americans to avoid groups of more than 10 people and the elderly to stay home while a pointed reminder was given to millennials to follow the guidelines and avoid social gatherings. Trump likened the effort to the measures taken during World War II and said it would require national “sacrifice."

The Defense Production Act gives the president a broad set of authorities to shape the domestic industrial base so that it is capable of providing essential materials and goods needed in a national security crisis.

The president, at the briefing, also continued his recent habit of referring to the coronavirus as the “Chinese virus,” which has been sharply criticized as racially inflammatory.