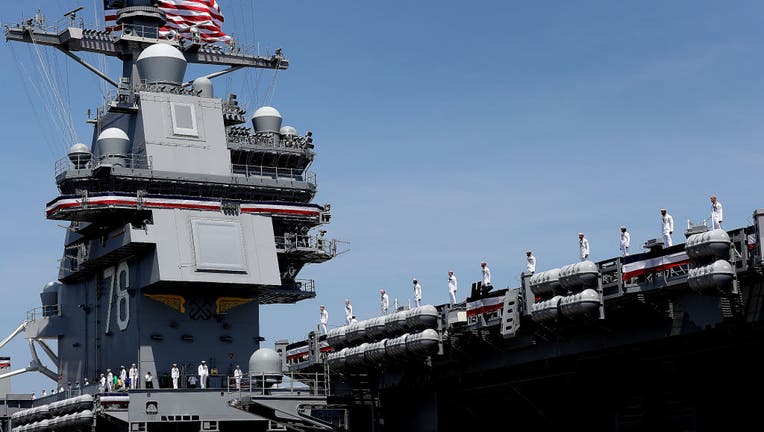 The crew mans the rails as the ship is brought to life during commissioning ceremonies for the USS Gerald R. Ford on Saturday, July 22, 2017, at Naval Station Norfolk, Va. (Rob Ostermaier/Newport News Daily Press/Tribune News Service via Getty Images

NORFOLK, Va. (AP) - The U.S. Navy’s most advanced aircraft carrier embarked on its first-ever deployment Tuesday and will train with other NATO countries amid Russia's invasion of Ukraine.

The USS Gerald R. Ford left the world’s largest Navy base in Norfolk, Virginia, along with destroyers and other ships that make up its carrier strike group. The Ford will join vessels from countries that include France, Germany and Sweden for various exercises, including anti-submarine warfare, in the Atlantic Ocean.

The exercises come seven months after Russia invaded Ukraine and during a time of increasing tension between Moscow and the West. Bradley Martin, a senior policy researcher with the RAND Corporation, told The Associated Press last week the exercises will showcase American military capabilities and support for NATO.

The USS Ford is the first of the Navy’s new Ford class of aircraft carriers. They are designed to carry a wider variety of planes and operate with several hundred fewer sailors.

RELATED: Pope Francis implores Putin to 'stop this spiral of violence and death' in Ukraine

The ship is deploying five years after it was commissioned. It’s been beset by various issues, including problems with its aircraft launch system and the elevators that bring missiles and bombs to jets on the flight deck.

Martin said it's not unexpected for the first ship in a new class to have to work out various kinks. He said the Ford is still part of a larger display of the nation’s military might.