AUSTIN, Texas - The UT Board of Regents says they support keeping "The Eyes of Texas" at UT Austin's school song.

In a statement, Chairman Kevin P. Eltife said the board unanimously supported UT Austin President Jay Hartzell's announcement that "The Eyes of Texas" would remain the school song at the board's July 2020 meeting. 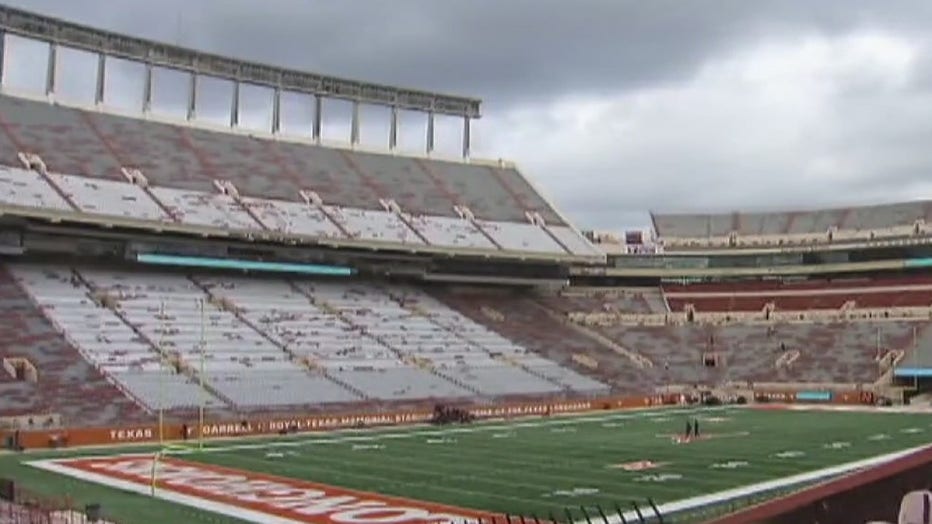 The UT Board of Regents says they support keeping "The Eyes of Texas" at UT Austin's school song.

"The Eyes of Texas has been UT Austin’s official school song for almost 120 years," the statement reads. "It has been performed at most official events—celebratory or solemn—and sung by proud alumni and students for generations as a common bond of the UT family. It is a longstanding symbol of The University’s academic and athletic achievements in its pursuit of excellence."

The regents also supported Hartzell's plans to engage in ongoing dialogue with the university community to discuss the song's origin and meaning and to implement additional university-wide initiatives to strengthen UT Austin's commitment to providing a welcoming and diverse campus.

RELATED: Longhorns expected to stand together for "The Eyes of Texas" after games

The official alma mater song and unofficial fight song is currently in the center of controversy because of its racial undertones. It's been long criticized for its connection to minstrel shows with characters in blackface in the early 1900s.

UT Austin's athletics director weighed in on the tradition last week after few UT players remained on the field as the song played with their "horns up" for fans after Saturday's UT-OU game.

Del Conte said in his weekly "Forty Acres Insider" that he's had many conversations with UT's head coaches which outline his expectations that "..our teams show appreciation for our University, fans, and supporters by standing together as a unified group for "The Eyes," while we work through this issue."

The official alma mater song and unofficial fight song is currently in the center of controversy because of its racial undertones. FOX 7 Austin's Destiny Chance has more details.

"I, like so many of you, view the song with pride and sing loudly and proudly in honor of the efforts of those who represent and support this phenomenal institution," Del Conte wrote. "As much as our student-athletes love this University, they have questions about the history of "The Eyes" and concerns about it."

RELATED: Several Longhorn band members say they will not perform "The Eyes of Texas"

Del Conte's statement also came after the dean of UT Austin's College of Fine Arts said in September that the Texas Longhorn band will be expected to perform "The Eyes of Texas."

In a letter, Dean Douglas Dempster said that when the band performs, it will be expected to perform the song that has been at the center of controversy for quite some time due to its racial ties.

"I’m aware that students in the band are divided about the meaning and significance of The Eyes. Some feel they cannot in good conscience continue to perform it," Dempster said in the letter. "Others take pride in the song. And I know yet others are conflicted. This is threatening the unity and viability of the band as a band."

Few Longhorn players remain on field for The Eyes of Texas

Only a few University of Texas football players remained following the team's loss to Oklahoma over the weekend but it wasn't just the defeat that kept them away. Many players don't want to be on the field while the university's alma mater song plays. FOX 7 Austin's Shannon Ryan has more.

In June, dozens of UT student-athletes released a statement calling on the University and Texas Athletics to address racial injustice, and on their list was "The Eyes of Texas."

LHBlacks, a new organization within the Longhorn band committed to amplifying black voices and providing a community for its black members, was also founded this year on Juneteenth. All of the members of this organization have agreed to not perform the song at all this fall.