‘We’ll see you in court’: State, City of Austin battle over mask mandate

In Austin and Travis County masks are still mandatory. The fear of a possible surge from the upcoming Spring Break is reason enough to go against the state according to County Judge Andy Brown.

AUSTIN, Texas - On the day the statewide mask mandate ended businesses reopened at full capacity and in places like Cedar Park, a mask was optional attire.

In Austin and Travis County, masks are still mandatory. The fear of a possible surge from the upcoming Spring Break is reason enough to go against the state according to County Judge Andy Brown.

"The fear is yes, that people will come to Austin with COVID with one of these new strains of COVID and spread it during spring break, and so our hope is business will continue to enforce the Mask Mandate until we get to a place where we are at 80% vaccination or at least a lot closer to 80% vaccination before people start taking masks off," said Judge Brown.

RELATED: Paxton looking into 'every avenue possible' to fight Austin about masks

In lifting his order, Gov. Greg Abbott said people should know by now how to live their lives during the pandemic. In response to the Austin-Travis County decision to keep a mask mandate, Attorney General Ken Paxton sent a letter Wednesday afternoon and demanded that the local mandate be rescinded by 6 p.m. Wednesday or he will sue.

We will see you in court is how several city and county officials responded. In a social media post, Mayor Steve Adler wrote the threat of legal action is coming, "from the state leaders who brought all Texas residents, No Power / No Water, Now Say No Mask."

In a Tuesday night Facebook post, Mayor Adler defended the local order. He claimed the Governor back in July gave cities the green light to make health rules law.

"So that's what we did, is we passed an ordinance consistent with the code to give the Rules of Dr. Escott the force of law," said Mayor Adler.

At the time the governor sent his letter to Adler, he was fending off calls for a statewide shutdown. Abbott also tied any local action to local surges in hospitalizations. Cases in Austin currently remain high but are below the governor's trigger point.

On Thursday, Paxton formally issued a lawsuit against the City of Austin and Travis County with an introduction stating:

"Just as a servant cannot have two masters, the public cannot have two sets of rules to live by, particularly in a pandemic and when those rules carry criminal penalties substantially impacting peoples’ lives and livelihood." 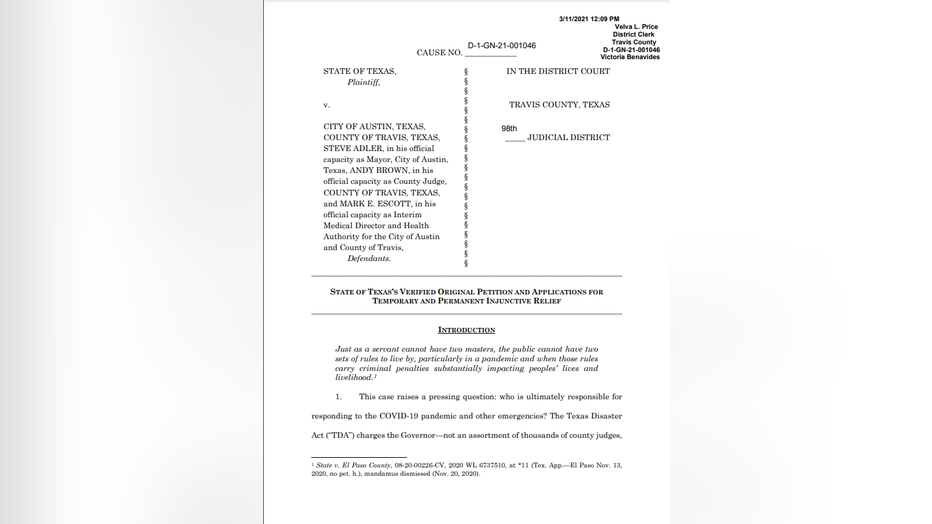 Adler and Travis County Judge Andy Brown are also named as defendants in the case.

"Judge Brown and I will fight to defend and enforce our local health officials’ rules for as long as possible using all the power and tools available to us.  We promised to be guided by the doctors, science and data as concerns the pandemic and we do everything we can to keep that promise," responded Adler in a statement Thursday. "Wearing masks is perhaps the most important thing we can do to slow the spread of the virus. We are not aware of any Texas court that has allowed state leadership to overrule the health protection rules of a local health authority."

Judge Andy Brown responded to the lawsuit in a statement saying:

"I will continue to listen to our public health authority, medical professionals, and the CDC who have consistently said masks save lives. It is unfortunate the attorney general is once again failing to make the health of our community his priority."

The mask mandate was part of a survey that was released on Wednesday. The only clear-cut thing about that polling question is the divided opinion. The poll commissioned by Progress Texas found the state is split 48 to 48% over whether or not to lift the mandate. The gap is wider in urban centers like Austin, except in Dallas where opinions mirrored the statewide response.

For shoppers like Tom Morgan, it all essentially a falls back to personal choice. "Now I will follow and comply with the company or place if they want me to, if there is a sign up there, I definitely will," said Morgan.

The city and the state have had a similar legal face offs over who to manage the pandemic. The most recent was over the Mayor’s order to put a curfew on restaurants for New Year’s Eve. The state claims the city lost the fight, although the mayor has said the case is different from the mask fight. Adler said the curfew fight is still working its way through the court system.