Seventy-eight days will elapse between Election Day on Nov. 3 and Inauguration Day on Jan. 20.

What happens between then is mostly formality. But there are crucial contingencies involved that will guide the United States in the event the election leads to a constitutional crisis.

Before mapping a path to the inauguration, it’s important to understand presidential elections are not run by the federal government. Outside of general voter qualifications spelled out by the Constitution, elections are run by the individual states.

Depending on the state, voters may vote in-person before Nov. 3 or submit a mail-in ballot before that date.

Unlike other elections, voters are not choosing a specific candidate. Even though the ballot will bear the names of the nominees, voters are actually choosing a slate of electors who are pledged to vote for a particular candidate.

These electors make up the Electoral College.

RELATED: The Electoral College: How does it work? Why do we have it? Could it ever change? Here’s what you need know

A candidate who wins a state’s popular vote is awarded all of that state’s electors in 48 states, with Maine and Nebraska as the only exceptions. These two states only give two electors to the state’s popular vote winner, the rest being allocated based on the plurality of votes in each congressional district.

Naturally, the public will know an apparent winner once the votes are tallied. Still, the results are far from certified.

The Constitution dictates that electors must cast ballots on the first Monday after the second Wednesday of December in an election year.

In 2020, electors will gather at their state capitols on Dec. 14 to fulfill their pledge to their candidate.

Even so, weeks will pass before the electoral votes are officially counted.

The Electoral Count Act of 1887 states that a joint session of Congress is to convene at 1 p.m. on Jan. 6.

The 12th Amendment tasks the president of the Senate, who will be Vice President Mike Pence, with presiding over the proceedings.

To eliminate conflicts of interest, the Electoral Count Act reduces his role to little more than custodian of the ballots. The vice president must “open all certificates and papers purporting to be certificates,” the act states.

The vice president hands each ballot to the four designated tellers (two from the House and two from the Senate), who then count each vote.

It takes 270 electoral votes to win the presidency. Since 538 is an even number, that leaves the possibility of the race ending tied at 269 apiece — and the Constitution has contingencies for such an occasion.

Presidents who lost the popular vote

The Electoral College and popular vote have only misaligned five times throughout 200 years of presidential elections.

The 12th Amendment compels the House to hold a contingent election in the event of a tie. Each state delegation will cast a single vote for president.

In this scenario, the candidate who gets at least 26 votes will become the president.

The Senate holds a similar election for vice president. But instead of voting en bloc, each Senator gets a single vote. The candidate who gets at least 51 votes wins the vice presidency.

Again, that doesn’t remove the possibility of a tie. If the House hasn’t chosen a president by Inauguration Day, the vice president-elect will become acting president until the House chooses a head of state.

If the Senate has also not chosen a vice president, the presidency follows the Presidential Succession Act of 1947. Under that law, the mantle of acting president would fall to the speaker of the House.

Assuming the election produced a president-elect, as it usually does, that person will be sworn into office on Jan. 20.

Tens of thousands of citizens, politicians and dignitaries will line the National Mall to watch the inauguration at the U.S. Capitol.

With all the songs, prayers and musical numbers, the pomp of the ceremony can disrupt the pacing. Ideally, the vice president and president would be sworn in at noon, but their term technically begins whether or not the oath has been recited by then. 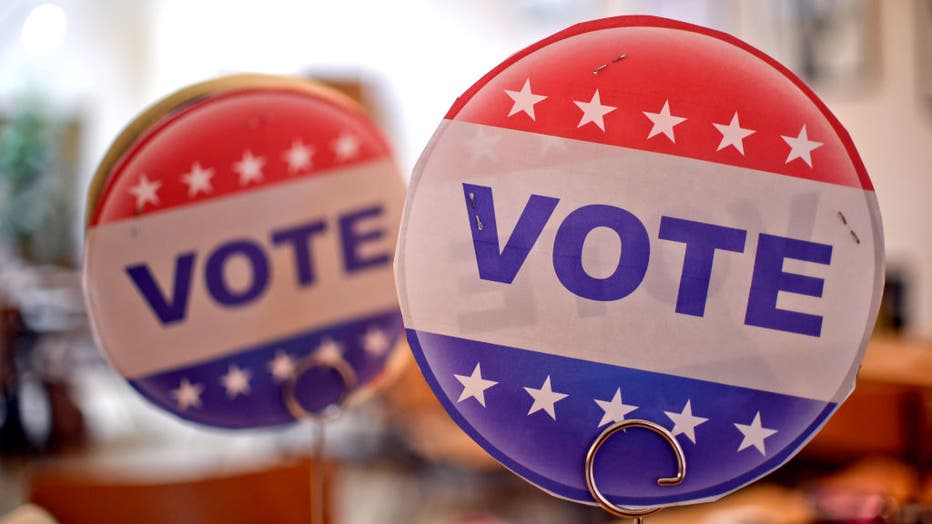 Signs reading 'Vote' can be seen at Hallesches Haus in Berlin, Germany, 30 September 2016. Here, Americans receive help with registering for the upcoming US elections. (Photo by Britta Pedersen/picture alliance via Getty Images)

It has become customary for the chief justice of the Supreme Court to administer the oaths.

The vice president-elect is first to swear an oath, though the Constitution doesn’t dictate the exact wording for that office.

The new president then addresses the nation for the first time.In the years in which a new president takes office, it is customary for the outgoing president to greet the successor at the White House, a symbolic gesture that is crucial to upholding the traditional peaceful transfer of power.

RELATED: Trump declines to commit to peaceful transfer of power if he loses election

The two pose for photos as work continues behind the scenes to move one family out and the other one in.

The new president traditionally spends much of the day signing documents, shaking hands and marching in a parade before spending the evening visiting several balls hosted all around the capital city, though things could be altered in 2021 due to the ongoing coronavirus pandemic.