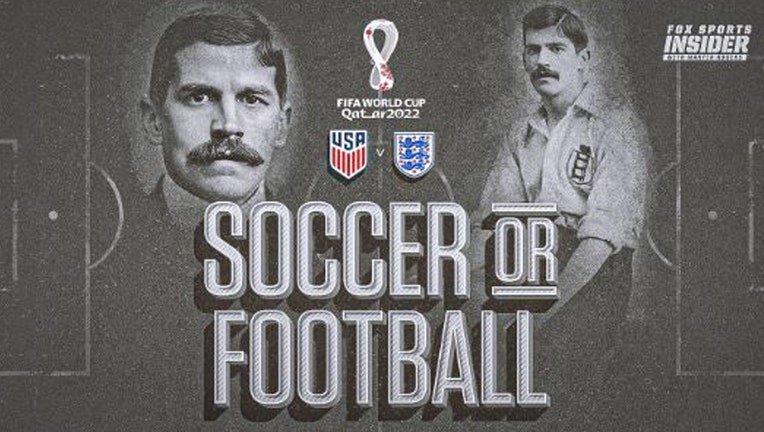 Silly old Americans, they don’t even call the sport by its proper name. It’s not soccer, say the English. It is football. (FOX Sports)

The last time England met the United States in the World Cup, the ingenious types at The Sun, Britain’s largest tabloid newspaper, quickly got their minds together for a suitably jingoistic headline.

"Here’s hopin’ that England United Shoot Some Totally Awesome Strikes Past The Goaltender In the Soccerball World Series today," the paper screamed from its front page, back in summer of 2010, ahead of a 1-1 draw between the teams in South Africa.

It was tongue-in-cheek, of course, but the underlying implication was clear.

Silly old Americans, they don’t even call the sport by its proper name. It’s not soccer, say the English. It is football.

To most of the rest of the world, the activity that will transfix millions when it is beamed from Qatar over the next month is, indeed, football. In this country, obviously, it is soccer, a convention largely necessitated because what we call football is that game where Tom Brady never gets old, Justin Jefferson makes ridiculous catches, and colleges have stadiums bigger than the population of their town. And where, if it’s a fall Friday, the high school lights are always on.

How it came to pass that soccer became embedded in the sporting lexicon actually has some pretty intriguing history behind it, and we will get into all that, but first let’s take note of the reality that the "soccer or football" debate is one that causes the American soccer diehard to dive for the aspirin.

As The Sun headline indicated, the fact that we call the game something different is taken by some snooty Brits as proof that the U.S. has an inferior culture when it comes to the beautiful game.

"It’s nonsense," said Clive Toye, a former British journalist-turned-executive who had a pioneering role in setting up the North American Soccer League (including Pele and other world stars) five decades ago, when I phoned him last week.

"It is quite infuriating. Young people in England think soccer is that American term and that football is the only thing they’ve ever called it in England. But they couldn’t be more wrong. Set them straight, would you?"

Delighted to do so, Clive, and here comes the rub.

The notion that soccer is a star-spangled creation has no more correlation with the truth than Harry Kane does with Harry Maguire. As a word, "soccer" is as English as a pint of warm ale sipped on the steps of Buckingham Palace with a Charles Dickens book in hand and a portion of fish and chips (wrapped in newspaper of course) in your lap.

Back in the 1800s, there were two types of football that were gaining popularity in the ultra-posh private schools where wealthy Brits sent their male offspring. There was rugby football, created at the upper crust Rugby School and where carrying the ball with one’s dainty mitts was permitted. That, of course, would later evolve into what is universally known as rugby.

Then there was Association football, which would be transported all over the globe, turn into the most popular game humankind has ever known, and spawn the likes of Diego Maradona, Mia Hamm, Cristiano Ronaldo and that odd species known as the noisy soccer parent.

Generally, American ideas about how well-heeled English people actually talk are mostly incorrect. No one much says "golly gosh" or "cheerio" these days, but one thing that does happen is that cheery chaps of a certain breeding love to shorten each other’s last names as a form of nickname.

Which is why former England cricket captain and ex-private schoolboy Michael Atherton is known to everyone as "Athers." Legendary broadcaster Brian Johnston was, to all and sundry, "Johnners."

This explains how rugby football, by extension, became known colloquially as rugger. And Association football became, assoccer, then soccer. We can all be thankful to a 19th century bloke, Charles Wreford-Brown, for reasoning that naming it "asser" would be an especially bad idea.

"When I was a boy in England, soccer and football were used interchangeably, even when rugby football became known as just rugby," Toye added. "You’d have a game of soccer. Or a game of football. Same thing. No one thought anything of it."

There was also a popular publication called Soccer Star that existed until the 1970s. My dad worked there for a few years, when he wasn’t trying on trendy bell-bottomed trousers or crashing Vespa scooters, as a hip young fellow during London’s style evolution of the '60s.

Things shifted over time, as they do. Rugby was by now just rugby, and as no one described it as rugby football anymore, there was no need in England to call the game with nets in the goals as anything other than football.

In the U.S., however, where Toye and his partners experienced an initial wave of success with the NASL, describing it as "football" was going to be too confusing. Many people referred to it as soccer football at first, then just soccer.

"Anyone who tells you that soccer is an American thing is just wrong," Toye said. "It’s British through and through."

Football phraseology has become a thorny and occasionally unpleasant topic of late. Former U.S. national team head coach Bob Bradley was on the wrong end of this when he was appointed at English Premier League club Swansea back in 2016.

Bradley was extremely careful to never say "soccer," aware that there was an inherent suspicion of American coaches venturing to Europe to ply their trade. Despite his best efforts, he came unstuck when he unwittingly used the term "road game" – "away trip" is more common in England - and was castigated for it. The backlash was overblown, unfair, and for Bradley, a good man with a pedigree that has seen him enjoy success in multiple countries, highly insulting.

American fans used to be bothered by such slights. Some, in prior years, would say "football" to describe their passion, especially if talking to foreign supporters. Things are changing though, as noticed by FOX soccer analyst and former U.S. national team star Alexi Lalas.

"It has been nice to see how national team fans don’t have an inferiority complex anymore," Lalas told me. "A lot of them are ‘OK, we call it soccer’ and it is almost a point of pride. The game in this country is not exactly the same as elsewhere and that’s part of the beauty of it. We embrace that and we care just as much for our team as anyone else."

We’re talking vowels and consonants here, so the discussion is all just a bit of fun, but it is quite appropriate for the American fan to want everyone to have their history straight.

What is real and present for each fan base is that on Nov. 25 (2 p.m. ET on FOX and the FOX Sports App) the most important thing is going to be hoping their team wins, not in proving which wording is worthier.

Which just goes to show that the name of the game (winning) and the game’s name (soccer/football/whatever) are different things.

Get the latest updates on this story at FOXSports.com.