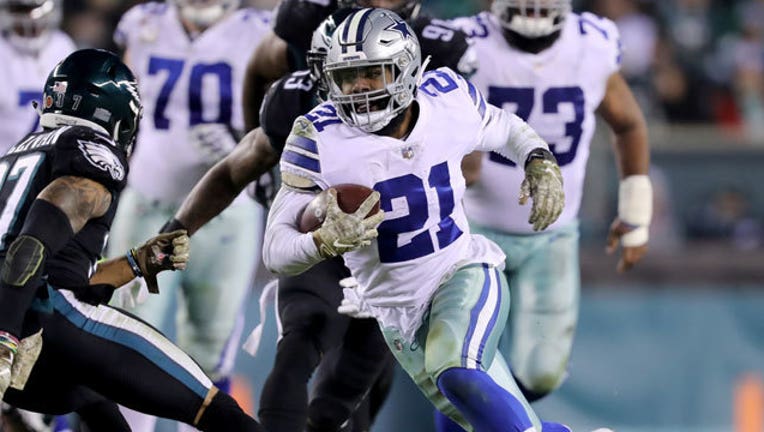 Ezekiel Elliott #21 of the Dallas Cowboys carries the ball as Tre Sullivan #37 of the Philadelphia Eagles defends on November 11,2018 at Lincoln Financial Field in Philadelphia, Pennsylvania. (Photo by Elsa/Getty Images)

Elliott had 151 yards rushing and his go-ahead 1-yard touchdown run in the fourth quarter helped the Dallas Cowboys beat the Philadelphia Eagles 27-20 on Sunday night.

The Eagles fell to 4-5 with their third straight loss at home while the Cowboys improved to 4-5. Washington leads the NFC East at 6-3.

"All of us need to look in the mirror," Philadelphia coach Doug Pederson said. "Are we doing enough? Are we giving enough? You have to strain yourself to make plays. We didn't do it. Each person, each coach, each player in the locker room has to look at yourself and decide every day to give your best."

The Cowboys gave their all to give embattled coach Jason Garrett a week off from questions about his job security.

"You can imagine the way Jason Garrett, his resolve before the game," Cowboys owner Jerry Jones said. "I asked him before the game, 'you feeling any pressure?' (Garrett replied) 'It just makes me want to go out and do more to turn this thing.'"

Prescott had 270 yards passing, tossed for one touchdown and also ran for a score. Elliott also had a TD reception .

"It was absolutely mandatory that we went and got this win," Elliott said. "We wanted to keep our hopes up for winning this division and making the playoffs."

Carson Wentz threw a pair of TD passes to Zach Ertz, but his pass to Ertz on fourth down fell a yard short of a first down at the Cowboys 29 with 1:09 left. The Eagles got the ball back at their 32 with 40 seconds left and drove to the Cowboys 32 for the final play. Wentz completed a pass to Ertz inside the Dallas 10. Ertz lateraled to Golden Tate but he was tackled for no gain to end it.

"We just didn't execute," said Wentz, who finished 32 of 44 for 360 yards with one interception. "We all got to look in the mirror and ask what can we do better."

It was a defensive battle into the third quarter before the offenses went back-and-forth.

Elliott ran in from the 1 to give Dallas a 27-20 lead after Prescott completed passes of 24 yards to Amari Cooper and 23 yards to Allen Hurns on the drive.

Coming off a bye, the Eagles were listless in the first half and trailed 13-3 before rallying to tie it on Wentz's 15-yard TD pass to Ertz late in the third quarter. Wentz connected with Jordan Matthews for 18 yards on third-and-11 to extend the drive. He hit him again for 12 yards on the next play and found Ertz a few plays later.

Prescott tossed a 7-yard TD pass to Elliott to give Dallas a 20-13 lead on the ensuing possession. Elliott accounted for 57 of the 75 yards on the drive.

But the Eagles answered. Wentz hit Nelson Agholor, who made an excellent catch for a 51-yard gain to the Cowboys 8. Wentz found Ertz in the back of the end zone for a 1-yard TD pass to tie it at 20-20.

Prescott engineered a 75-yard drive in the final 90 seconds of the first half to send the Eagles into the locker room to a chorus of boos from a frustrated crowd.

Michael Gallup turned a screen pass on third-and-15 at the Cowboys 35 into a 25-yard gain. Prescott connected with Cole Beasley for 21 yards and hit Hurns for 17 yards to the Eagles 1. Prescott then sneaked in for the score.

After hearing it from their fans, the Eagles came out with a stop on defense and the offense drove to the Cowboys 11 before having to settle for Jake Elliott's 26-yard field goal.

The Cowboys tried a fake punt on fourth-and-2 from their 31 and Jeff Heath took a direct snap and ran three yards. A few plays later, Elliott hurdled Tre Sullivan on a 32-yard run to the Eagles 8. But Michael Bennett sacked Prescott on third down and Brett Maher kicked a 31-yard field goal for a 6-0 lead.

Tate, acquired by the Eagles from Detroit on Oct. 30, had only two catches for 19 yards.

Eagles: CB Ronald Darby left the game after injuring his knee in the second half. Starters Jalen Mills and Sidney Jones already were out of the lineup.