ESPN is apologizing for an on-screen graphic displayed while covering former Clemson wide receiver Tee Higgins, who was drafted No. 33 overall by the Cincinnati Bengals in the 2020 NFL Draft.

ESPN is apologizing for an on-screen graphic displayed while covering former Clemson wide receiver Tee Higgins, who was drafted No. 33 overall by the Cincinnati Bengals in the 2020 NFL Draft.

The network had showed a “Get to Know” graphic about the star wideout. Underneath his hometown, info about his basketball prowess and noting that his sister played college basketball, the graphic read, “Mom, Camilla, fought drug addiction for 16 years.”

“I’m proud of my mom for turning her life around for me and my sister! I have no problem with them showing the world that my mom is a true fighter,” Higgins wrote in a now-deleted tweet that he posted Saturday in response to one of the tweets calling out ESPN.

The network later issued an apology to the Washington Post, admitting the graphic “should not have aired.”

“It was a mistake and we apologize for it,” ESPN vice president of production Seth Markman told the newspaper in a statement Sunday. “We want our draft coverage to personalize players and, where appropriate, acknowledge the obstacles they’ve had to overcome on their journey to the NFL. This graphic lacked proper context.”

At his NFL Combine news conference, Higgins spoke about his mother, saying she was addicted to drugs and “in and out of prison” while he was growing up. 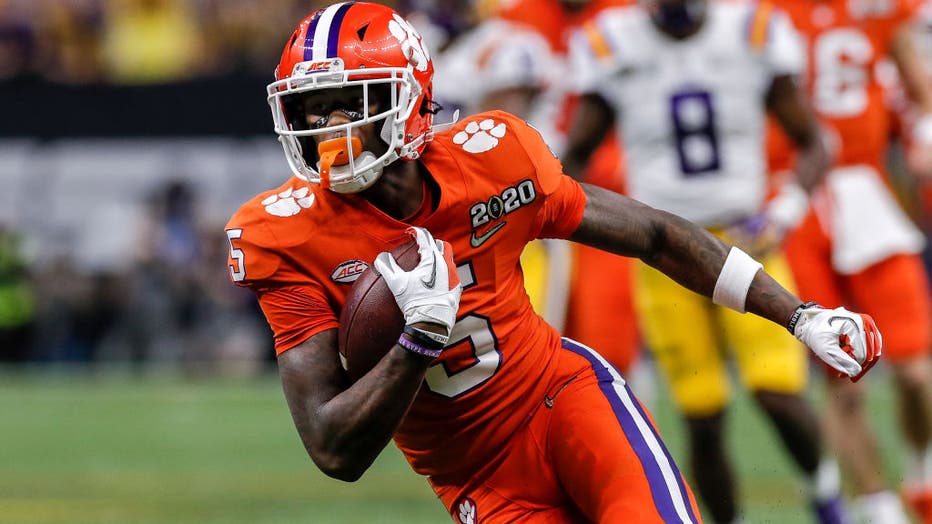 Wide Receiver Tee Higgins No. 5 of the Clemson Tigers on a catch and run during the College Football Playoff National Championship game against the LSU Tigers at the Mercedes-Benz Superdome on January 13, 2020 in New Orleans, Louisiana. (Photo by Don

“Her story is why I’m here,” Higgins said. “She kept me playing football. Now that she’s 12 years clean, she’s unbelievable. I want to have her stress-free. I don’t want her to work anymore. I just want to have her living her best life.”

Higgins was the second selection by the Bengals, who took LSU quarterback Joe Burrow with the No. 1 overall pick of the draft.

In 2019, Higgins finished with 59 receptions for 1,167 receiving yards and 13 touchdowns for Clemson, which reached the national championship game before falling to LSU. Higgins likely will make an immediate impact for the Bengals during his rookie season.