First baseman Freddie Freeman, who won the NL MVP in 2020, says the Braves championship win was the epitome of a team effort.

ATLANTA - Freddie Freeman gave a heartfelt, "Goodbye," to Atlanta Braves fans and his former teammates on behalf of his family on Wednesday.

The message on his verified Instagram account came one day after the Braves signed newly-acquired Matt Olson to an eight-year contract.

The post included a photo of his wife, Chelsea, and their three children.

"I don’t even know where to begin. For the past 15 years I got to be apart of your organization. It was truly an honor. We went through the very highs together and some lows but those lows is what made last year so special. You watched me grow up from a baby faced kid to marrying my love @chelseafreeman5 and seeing us bring 3 beautiful boys into this world. I’m so glad my family got to be apart of yours! To Snit, my coaches, teammates, training staff, clubhouse staff, and everyone who made Turner Field and Truist Park so special for my family and I over the years. Thank you from the bottom of my heart. It has been a blast to have you cheer for me and I hope I was able to bring smiles to a lot of your homes over the years. I gave everything I had day in and day out and I hope you guys saw that as well. Although our time has come to an end, I look forward to seeing and playing in front of you all again. When that time comes, I hope you remember all the wonderful memories we made together. I love you Braves Country! Champions Forever!

It's not clear if Freeman, who's a free agent, signed elsewhere.

Players in North Port, Florida, said Freeman's presence would be missed in the clubhouse.

For some players, the absence of Freeman's family — his wife, Chelsea and their three children — will leave the biggest void. 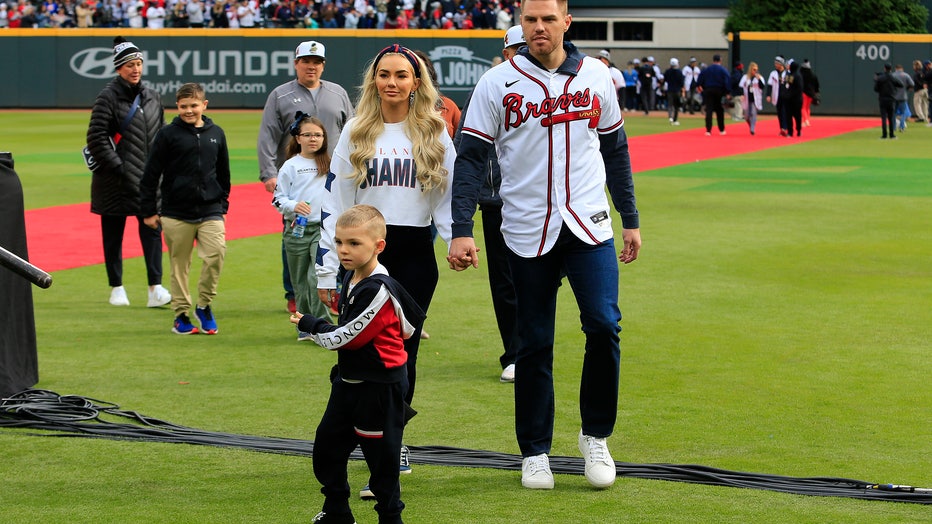 ATLANTA, GA - NOVEMBER 05: Freddie Freeman #5 of the Atlanta Braves and family during the Celebration at Truist Park on November 5, 2021 in Atlanta, Georgia. (Photo by David J. Griffin/Icon Sportswire via Getty Images)

"It's the little things that I'll remember more-so that what's on the field," catcher Travis d'Arnaud said.

The Atlanta Braves, the defending 2021 World Series Champions, appears to be losing Freddie Freeman, who became a free agent this year. Many believe Freeman is the face of the current franchise and some former Braves have even said Freeman could continue to stay in a Braves uniform as long as he wanted.

"He's one of the guys we're never going to forget here," Albies said.

Swanson advocated for the Braves to re-sign Freeman. He's frustrated and disappointed, but optimistic about the future of the team, which just acquired a slugging bat to fill Freeman's role.

During the Atlanta Braves World Series 2021 Celebration at Truist Park, Dansby Swanson is met with thunderous cheers after telling the Braves to re-sign Freddie Freeman. The two then hug as the crowd cheers 'Freddie, Freddie."

"It always comes down to business and none of us like it, but at the end of the day, it kind of has to be that way," Swanson said.