The WNBA’s Players Association on Saturday called on the White House, President Biden, and Vice President Kamala Harris to do whatever is necessary to bring Brittney Griner back to the U.S.

The plea comes after the WNBA star's pre-trial detention was extended one month after her arrest in Russia.

"Today’s news on Brittney Griner was not unexpected, and the WNBA continues to work with the U.S. government to get BG home safely and as soon as possible," the league said in a statement.

Griner was arrested in February for allegedly carrying vape cartridges containing oils derived from cannabis through an airport. Diplomats from the U.S. Embassy in Moscow spoke with Griner Friday and reported she "is doing as well as can be expected in these circumstances," State Department spokesman Ned Price said.

Over the weekend, the WNBPA and its members partnered with Tamryn Spruill, a journalist who created a Change.org petition that demanded legislators work urgently to gain the swift and safe release of Griner.

"With the dynamic and history-making women of the WNBA now lending their names, voices, and platforms to this demand for the White House, President Joe Biden, and Vice President Kamala Harris to expedite efforts to win BG's release, I am confident this petition will explode in size," Spruill predicted in the petition. 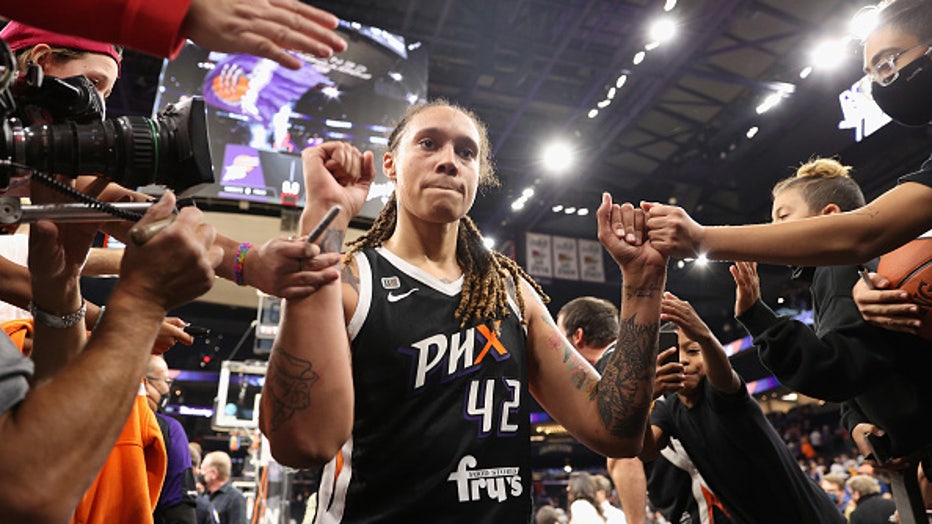 PHOENIX, ARIZONA - OCTOBER 13: Brittney Griner #42 of the Phoenix Mercury celebrates with fans following Game Two of the 2021 WNBA Finals at Footprint Center on October 13, 2021 in Phoenix, Arizona. The Mercury defeated the Sky 91-86 in overtime. NOT

"It already has gained traction since players today began signing it. The hope is that our elected officials will feel increased pressure to act with expediency to get BG back on U.S. soil and reunited with her family," the petition added.

Griner made her first public appearance Friday, wearing handcuffs and an orange hoodie with the hood covering her head.

The 6-foot-9 center for the Phoenix Mercury was set to have her first hearing over allegations that carry a penalty of up to 10 years in prison.

With the WNBA season underway, a "BG 42" decal was placed on each of the league's 12 courts.

Seattle Storm star Breanna Stewart noted she was paying attention to what the White House does next.

"It has been 86 days since our friend, Brittney Griner, has been wrongfully detained in Russia. It is time for her to come home. @WhiteHouse, we are paying attention, and we are counting on you," Stewart wrote on Twitter.