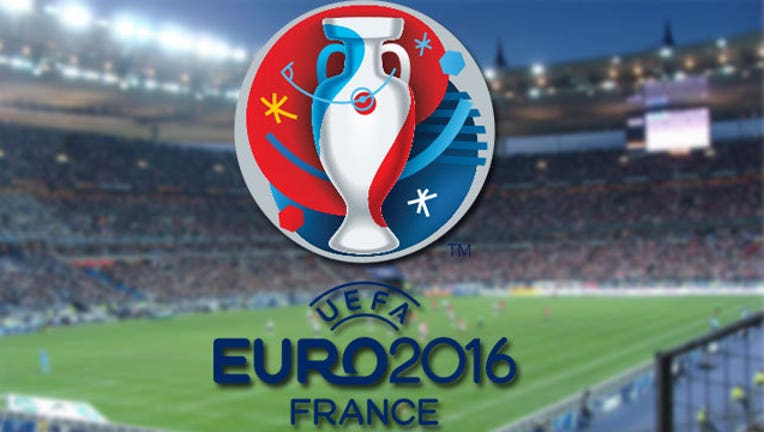 NICE, France (AP) — Aron Gunnarsson, every inch the bearded Viking, ran shirtless toward the Iceland fans and led them in their victory chants.

Beating England at the European Championship was more than just Iceland's greatest sporting success. Monday was a moment of national triumph in a country where the team's improbable progress from the group stage had already outshone coverage of Saturday's presidential election.

The Scandinavian nation of just 330,000 people, by the far the smallest country to qualify for a European Championship, inflicted a shattering 2-1 defeating on England - the country that has been the model for Icelandic football for decades.

Defender Ragnar Sigurdsson, who scored Iceland's first goal and made an outstanding last-ditch tackle to deny Jamie Vardy a potential equalizer, said he had "dreamt ... a long time ago" of playing England.

But he sounded a little disappointed with what he'd found.

"We didn't feel that they created any chances," he said. "(Harry) Kane had a header opportunity and headed straight to the goalkeeper, there's a lot that we were just heading away and long shots from distance."

It was a victory built on smart positioning in defense, English-style physical play and many, many individual errors from England's players.

Iceland's rock-solid 4-4-2 formation was a ghost from the past of England coach Roy Hodgson, who along with Bob Houghton introduced it to Sweden when they coached there in the 1970s and 1980s. One of their disciples was Lars Lagerback, now Iceland's co-coach.

"I learned a lot from them, they changed the training methods and the coaching education in the long run in Sweden and I was really, really benefiting from that," Lagerback said, minutes after Hodgson resigned from the England job. "Respect to a really, really good coach."

Lagerback took Hodgson's gifts and turned them against his old master with devastating effect. In seven games against England with Sweden and now Iceland, Lagerback's teams have never been defeated. In Nice on Monday, Iceland neutralized the English Premier League's top two scorers, Kane and Vardy, with tight marking, positional forethought and superb awareness of where the rest of the team was at all times.

England's left winger Raheem Sterling won the penalty that gave England the lead early on. But he was then kept quiet by right-back Birkir Saevarsson. On the right, Daniel Sturridge had a little more success but found few targets for his often-wayward crosses.

Iceland's gameplan was built around shutting down England's stars, but it wasn't all negative. On the break, the Icelanders created the best chances of the game and could have scored another when Gunnarsson turned Jack Wilshere but saw his shot saved by Joe Hart.

All through the game, the vastly outnumbered contingent of Icelanders sang more than England's supporters, who were left in stunned silence for long periods.

As England's players slumped onto the grass and the final whistle, Iceland's substitutes and backroom staff charged onto the pitch as if they'd won the final.

As for playing host nation France in a quarterfinal on Sunday, Hallgrimsson added: "I will take it."

Fresh from beating England, tiny Iceland now feels it can take on the world.

"We didn't have so much problems defending (against) the English, and also in ball possession we created a lot of good chances," Hallgrimsson said. "If the players play with the same attitude, we can beat anyone."