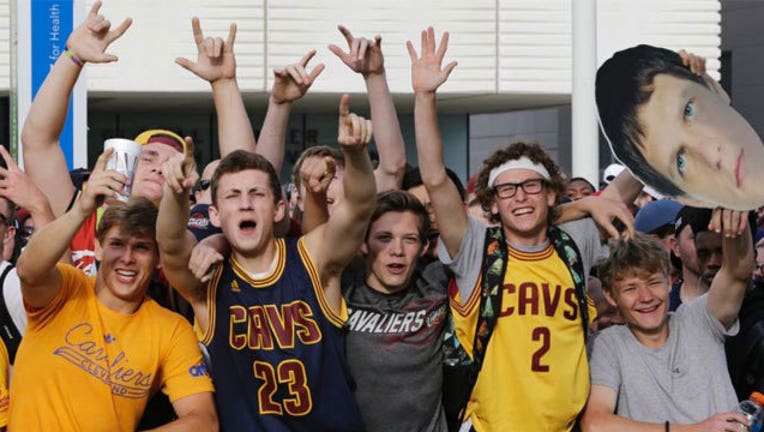 CLEVELAND (AP) — Cheered by a sea of wine-and-gold dressed fans spilling off sidewalks and choking the streets, LeBron James and the Cavaliers are parading as NBA champions.

The title drought in Cleveland is over. The party — and a procession slowed to a crawl by a mass of humanity — is just getting started.

And James gave his hometown fans even more reason to celebrate Wednesday by telling reporters he intends to stay in Cleveland, skipping the drama of previous splashy announcements when he decided to go to Miami in 2010 then come back to the Cavaliers four years later.

Hundreds of thousands of fans, some arriving Tuesday night to camp out so they could get as close as possible, overwhelmed downtown Cleveland to celebrate with James, Kyrie Irving and their teammates. The Cavs made history by overcoming a 3-1 deficit to beat the Golden State Warriors in the Finals, ending the city's 52-year championship drought.

This was the parade Cleveland has waited to throw since 1964, when the beloved Browns owned the NFL. There were lean years — and so many close calls — in between before James, born in nearby Akron, made good on his promise to bring home a championship.

He delivered it and Cleveland, where sports suffering has been a way of life for generations, and passionate northeast Ohioans are savoring every moment.

Fans stood on rooftops, portable toilets and hung out of office building windows hoping to get a glimpse of James, who rode in a Rolls Royce convertible with his wife, Savannah, and their three children. Near the start of the route and just feet from where his iconic, 10-stories-tall banner hangs, James stood and posed with his arms outstretched just as he does on the giant mural — life imitating art, the photo op of a lifetime.

The parade's start was delayed more than 30 minutes because of the swarming crowd, which blocked the streets near Quicken Loans Arena and prevented the open-air vehicles that carried the Cavaliers from getting to the staging area. Police used patrol cars and a mounted horseback unit to slowly clear the congestion so the celebration could continue.

The crowd was packed so tightly that fans could reach out and high-five their heroes.

While he waited for the convoy to move, Irving jumped onto the top of a pickup truck and tossed his baseball cap into the crowd. A shirtless J.R. Smith dropped down from his vehicle and slapped hands with fans along barricades near "The Q." Kevin Love wore a golden-studded WWE championship belt, one that was out of Cleveland's reach for so long.

Later, James planned to address the crowd at a rally on Mall B, a wide-open area flooded with fans.

This was a parade Cleveland has wanted since the Browns won it all when Lyndon Johnson was president.

No major city had endured more pain with its sports franchises. The Browns, Indians, Cavs and Barons — yes, there was an NHL team here for a brief time in the 1970s — went a combined 146 seasons between sips of championship champagne.

When the Browns won their last title, beating the Baltimore Colts 27-0 before 80,000 at old Municipal Stadium, there was no major celebration. Cleveland fans simply went home, probably shoveled their driveways and went on with their lives. After all, championships were routine as the Browns, led by coaching great Paul Brown and a roster of future Hall of Famers, won seven titles from 1946 to 1955.

Cleveland's mantel has been barren of trophies since, and the close calls have gained infamous nicknames: Red Right 88, The Drive, The Fumble, The Shot, The Move and The Decision are a part of the city's troubled sports lexicon. The Browns lost three AFC titles to Denver from 1986-1989; the Indians were beaten in Game 7 of the 1997 World Series in extra innings; and the Cavs got swept in the 2007 Finals before losing to the Warriors in six games a year ago. Art Modell packed up the beloved Browns in 1995 and moved them to Baltimore.

Cleveland was so desperate for a parade that the previous one held for a sports team came in 1995 after the Indians made it to the World Series for the first time since 1954. They lost to Atlanta.

A parade for second place.

However, James, star guard Kyrie Irving and their teammates, who survived a coaching change midway through the season and finally fulfilled expectations in the postseason, have taken Cleveland back to the top.

There's a new nickname — The End.