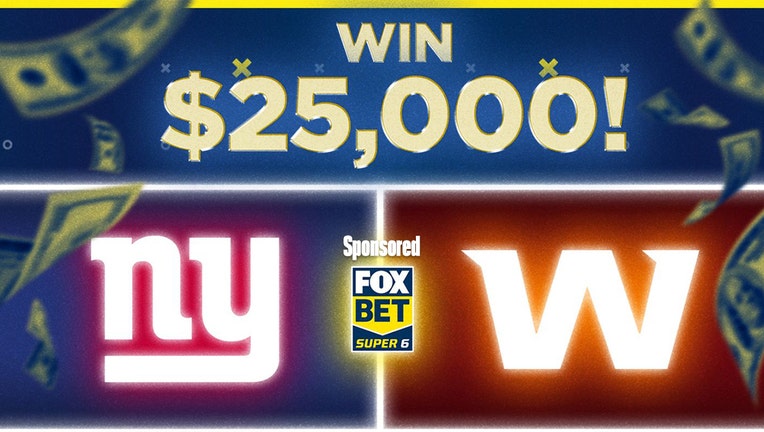 It's easy to overreact after just one week.

But for the New York Giants and the Washington Football Team — two teams that battled for the NFC East title until the final night of the 2020 season — it might not be too early to worry.

In Week 1, the Giants once again received a perplexing effort from quarterback Daniel Jones, who had turnover issues during a 27-13 home loss to Denver. Meanwhile, Washington lost Ryan Fitzpatrick to the injured reserve list and saw Justin Herbert lead the Los Angeles Chargers to a 20-16 victory at FedExField.

The storylines for Thursday are pretty simple: The loser could be looking at a big gap in football’s weirdest division.

The Giants will likely get the full return of Saquon Barkley, who was on a pitch count against the Broncos. Washington’s biggest story is quarterback Taylor Heinicke, who was impressive last year during a loss to Tampa Bay in the NFC wild-card round.

You could win $25,000 with the Thursday Night Football challenge on FOX’s Super 6. Select the correct answer to all six questions on the free Fox Super 6 app, and you could win the grand-prize jackpot. It’s quick, fun and free to play.

Here are the questions and our picks for Thursday night’s game.

Barkley ran 10 times for 26 yards on Sunday in his first game back after a major knee injury. The short week might be a hindrance for him. Remember that Golladay is also just back on the field after a hamstring injury. McLaurin could be a huge factor in this game for a Washington passing game that gets going when he is involved.

Which team will have the most rushing yards, and how many will it have?
The options: Giants, Washington, tie with ranges of 0-161+

The Barkley injury last season showed how poor the depth at running back is for New York, which kept trying different combinations and couldn’t get much going. The Giants had just 60 yards on the ground Sunday, so a hindered Barkley against the Washington defense could be a bad matchup. Oh, and Washington’s Antonio Gibson is pretty good. He rushed for 90 last week against the Chargers.

Which team will have the most passing yards, and how many will it have?
The options: Giants, Washington, tie with ranges of 0-326+

Will Ron Rivera & Co. turn Heinicke loose or make him a game manager? Washington’s running game gives it more depth than New York. It also allows the offense to run the game a little differently, with a ground game that can eat clock when ahead. Jones could pass for a decent number of yards, but that could be because the Giants are playing catch-up.

For more up-to-date news on all things NFL, click here to register for alerts on the FOX Sports app!

Which team will have the longest completion, and how many yards will it be?
The options: Giants, Washington, tie with ranges of 0-61+

McLauren has the ability to break a game open with the deep ball. But with Heinicke’s uncertainty about the approach and whether "Riverboat Ron" will open up the playbook on a short week, Jones and Golladay might be the best bet for a big gainer.

Which team will have the most total yards, and how many will it have?
The options: Giants, Washington, tie with ranges of 0-426+

The Washington offense last week struggled to get much going. Maybe that was a symptom of the Fitzgerald injury. However, that was also a trend that carried for a lot of the previous season. Jones and the Giants can post yards. That hasn’t been the problem. Protecting the football has been the issue.

Who will win, and by how many points?
The options: Giants, Washington, tie with ranges of 1-17+

The Giants have won six straight in this rivalry, but they looked flat last week at home. Now, they have to go on the road on a short week against a defense that can get after the quarterback. This feels like a game that’s way more important for Washington, which can’t afford two home losses. An ugly game favors Washington.

Play FOX Super 6 for your chance to win big absolutely for free each and every week! Just download the app to your phone or mobile device and make your picks today!