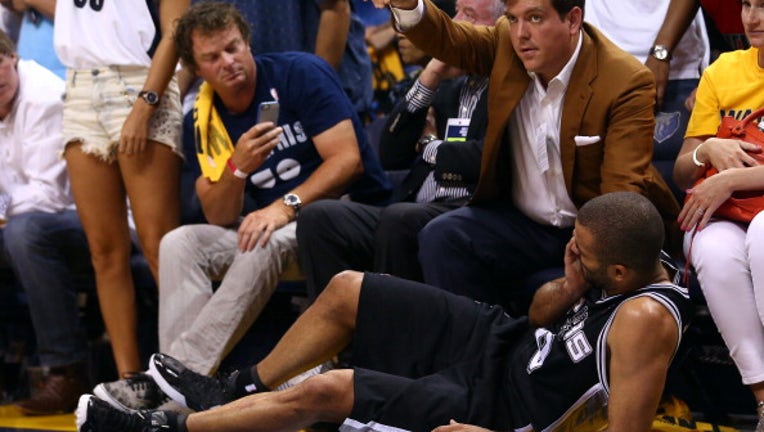 Tony Parker #9 of the San Antonio Spurs reacts after injuring his eye in front of Peter J. Holt in the fourth quarter against the Memphis Grizzlies during Game Four of the Western Conference Finals of the 2013 NBA Playoffs at the FedExForum on May 27

Holt decided to speak out and ease worries for those in San Antonio after the Spurs asked for permission last week to play four home games outside of San Antonio.

"I want to reassure you that the Spurs are in San Antonio to stay," Holt wrote in a message posted on Twitter.

"There is no other team in the NBA like the Spurs and no other home like San Antonio. Your team, our team, together we are the silver and black. Spurs fans - we are here to stay, Por Vida," the message continued, without the mention of Austin.

The Spurs currently play home games at AT&T Center, which is owned by Bexar County. The team has a non-relocation agreement with the county that only allows the Spurs to play two home games outside of San Antonio.

But last Tuesday, county commissioners gave initial approval to a one-year pilot that would let the Spurs play four games away from the AT&T Center for the 2022-23 season – with a goal of expanding their fan base in Austin and Mexico. The road home games could be played in Austin's Moody Center, in Mexico City, and at the Alamodome.

The motion for more home games on the road barely passed with a 3-2 vote, which prompted a warning from County Judge Nelson Wolff to Bobby Perez, the Spurs' chief legal counsel.

The Spurs legal counsel said the move could help the franchise acquire a naming rights contract to replace the AT&T Center. They noted that the franchise would still be able to keep revenue on the road games because of the home team designation, the outlet reported.

But many are still worried that Austin – amid its soaring popularity and influx of large corporations – could snatch their team away. San Antonio was stung a few years ago when Major League Soccer opted to expand in Austin instead of the Alamo City.

County commissioners will meet again in a couple of weeks for the next vote on the issue.