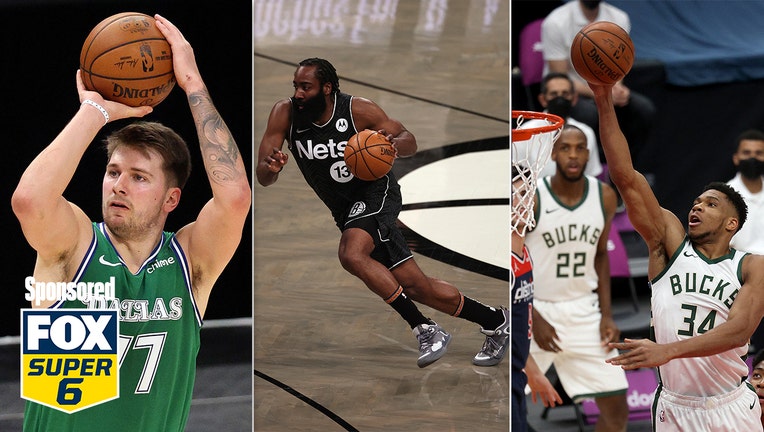 The NBA’s Eastern Conference has been broken into a class system.

There’s the upper class, which consists of three teams – the Philadelphia 76ers, the Brooklyn Nets and the Milwaukee Bucks.

Then it’s everyone in the middle class, sitting within reach of the playoffs. After that, it's the lower class teams, who are already looking ahead to the draft lottery.

All three of the conference’s elite teams have MVP candidates – Philadelphia’s Joel Embiid (out right now with a bone bruise in his left knee) Brooklyn’s James Harden and Milwaukee’s Giannis Antetokounmpo. And when the conference’s best players get together, it is sure to produce something magical.

That’s what will take place on Wednesday night in Philadelphia when the 76ers – still featuring All-Star Ben Simmons and a red-hot Tobias Harris – host the Bucks in the marquee attraction of a deep Wednesday night schedule.

And you can enjoy that schedule by playing FOX Super 6! All you have to do is download the FOX Super 6 app and answer six questions about who will win the big games, and by how many points. If you nail all six picks, you could win the $25,000 grand prize. It’s easy to play on the FOX Super 6 app on your phone or tablet. And best of all, it’s free!

Here’s the night’s schedule and what to watch for:

If the playoffs started today, the Raptors would be sitting at home. Toronto has lost four straight road games and has five players – including Pascal Siakam and Fred VanVleet – on the health and safety protocol list. All five players returned to practice on Tuesday, but it isn’t clear when they could end up back in the lineup. Perhaps the grind of playing what amounts to a full season on the road – Toronto’s home games this year are in Tampa, Fla. due to the border being closed – has caught up to the 2019 NBA champions.

The Pistons are owners of the worst record in the East and 1.5 games "ahead" of Minnesota for the worst mark in the NBA heading into Wednesday night. Yet, they also possess a 129-105 win over Toronto two weeks ago in Tampa.

As Wednesday night begins, the Nets sit one game back of Philadelphia for the best record in the East. They are also winners of five straight and 13 of their last 14. Kyrie Irving has become a more active participant in the scoring column for Brooklyn, scoring 40 last Thursday night against the Celtics and adding a team-high 34 in a 117-112 win over the Knicks on Monday night.

The Pacers are home but have struggled as of late, losing seven of their last nine. They’ve received steady performances from Malcolm Brogdon, who is averaging 21.6 points a game.

Philadelphia has played well in their last 2.5 games without Embiid, who was injured on Friday night in a commanding win over Washington. Harris was enormous in the second half of Tuesday’s 99-96 win over New York, putting up a 30-point, six-rebound effort to help the 76ers rally from a nine-point deficit.

But containing Antetokounmpo on the second half of a back-to-back without Embiid might be asking too much. In 22 career games against the Sixers, the "Greek Freak" is averaging 22.0 points, 10.5 rebounds and 5.3 assists.  What could be huge for the Sixers is building up a buffer between themselves and Milwaukee for the third seed in the East.

After a home game on Saturday against Sacramento, Philadelphia spends 10 of its next 12 games away from Wells Fargo Center, including games against the Knicks, Lakers, Clippers, Nuggets and Celtics, and possibly all of them without their MVP candidate.

Not that long ago, this would have been a battle for supremacy in the West, but injuries and trades have changed all of that, and a 119-107 loss to Atlanta on Tuesday night was Houston’s 17th straight.

The Warriors, meanwhile, are in a pattern of lopsided games, losing five of the past six with a 21.4 average margin of defeat. Stephen Curry is still the most fascinating person in the league, averaging 29.3 points per game.

This is one of those sneaky good games that fly under the radar. Neither team is in a major media market and neither is a conference leader, but Charlotte has won its last four games and recently went 3-3 on a brutal six-game West Coast road trip. Gordon Hayward and Terry Rozier have formed a dynamic duo that can carry Charlotte into the playoffs.

Meanwhile, Nikola Jokic and the Nuggets have won six of their last seven, including a 121-106 win over Indiana on Monday that saw "The Joker" drop 32 points and 14 rebounds.

Time for alarm bells for the Clippers? Many felt that way after a lackluster Sunday night game in New Orleans. However, 22 points from Kawhi Leonard in a 109-99 win over the Mavericks in Dallas solved some of those concerns. A win on Wednesday night would complete a three-game season sweep for LA over Dallas.

The Mavs have received everything they could possibly ask from Luka Doncic, who is averaging 28.1 points and 9.3 assists this season – both stats ranking in the top 10 in the league.

Enter the NBA Challenge contest on the FOX Super 6 app for free and you can win this week's $25,000 jackpot! Download now at foxsuper6.com!