The season's first plume of dust rolling off Africa's Sahara Desert will spread 5,000 miles across the Atlantic Ocean, Caribbean Sea and Gulf of Mexico en route to the U.S. Gulf Coast by this weekend.

This mass of very dry, dusty air is called the Saharan Air Layer. According to NOAA's Atlantic Oceanographic and Meteorological Laboratory, it forms over the Sahara Desert during the late spring, summer and early fall and moves into the tropical Atlantic every three to five days.

Saharan Air Layer activity typically ramps in mid-June, peaks between late June and mid-August, then quickly subsides after mid-August. During this peak period, Saharan dust plumes will often travel all the way to Florida and the U.S. Gulf Coast, including as far west as Texas.

NOAA says the dust plume is usually 2 to 2.5 miles thick, with its base situated about 1 mile above the Earth's surface, so that means it generally sits between 5,000 and 20,000 feet above ground level.

A ribbon of stronger winds in the mid-levels of the atmosphere called the African easterly jet stream transports the dust from Africa westward across the Atlantic Ocean. Then, a high-pressure system in the subtropical Atlantic can send the dust into the Caribbean. From there, the wind patterns can steer the dust toward parts of the U.S.

The first Saharan dust plume of the 2022 season was beginning to emerge off the coast of western Africa on Tuesday. 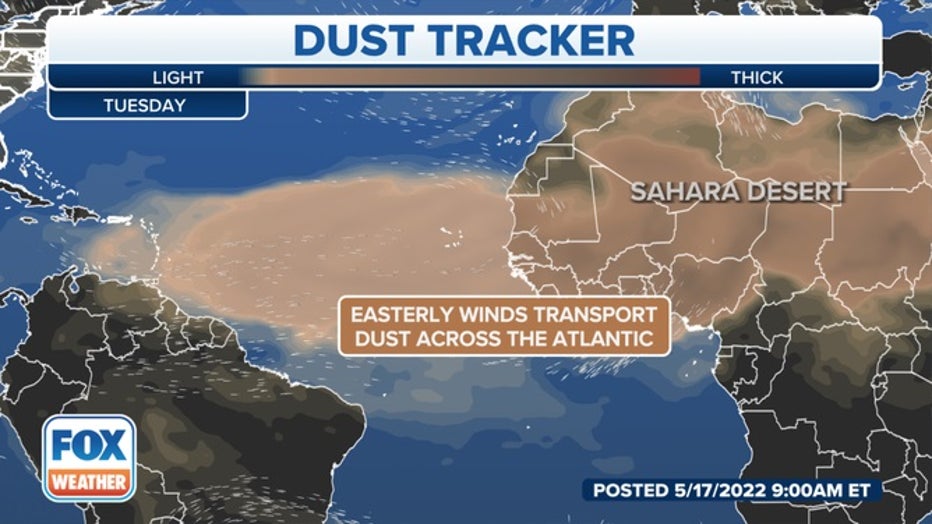 NASA's GEOS-5 model indicates the dust will reach the Gulf of Mexico by this weekend.

From there, the dust plume will push inland along much of the U.S. Gulf Coast from Florida to Texas. 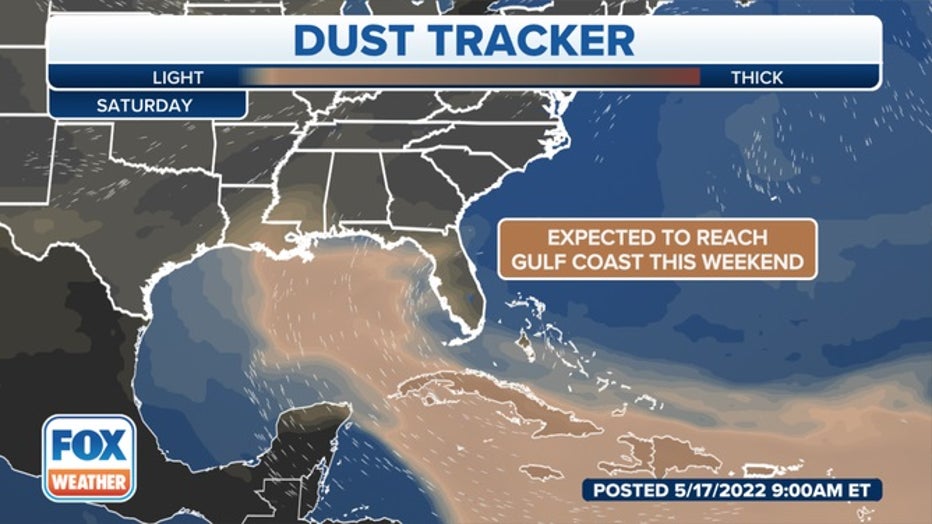 Early next week, the mid- and upper-level winds over the Lower 48 might pull the dusty air even farther north into other parts of the South.

Saharan dust is notorious for creating vibrant sunrises and sunsets because, as the light bounces off dust particles, it taps into all of the color spectrum.

The dust can also contribute to poor air quality in some areas. 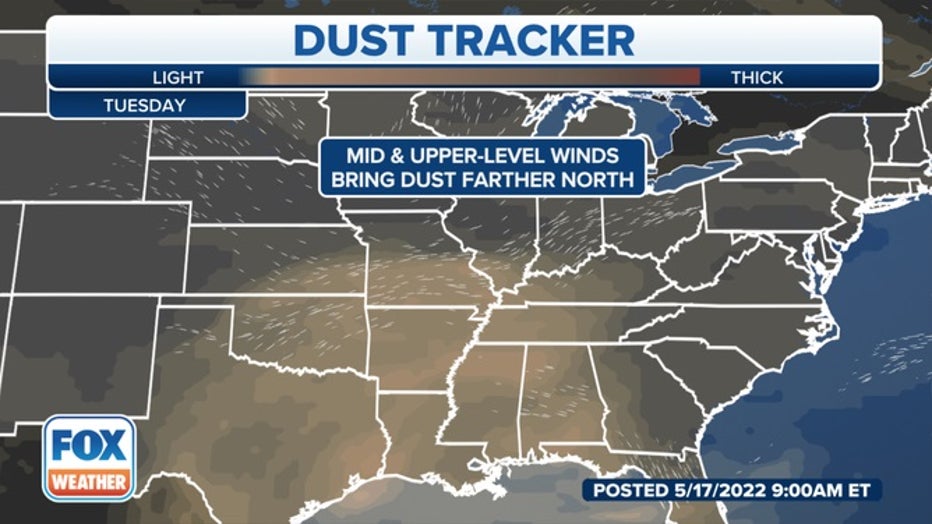 According to NOAA, the Saharan dust plume has been shown to suppress tropical storm and hurricane formation and intensification in the Atlantic.

The dusty air is very dry, with about 50% less moisture than the typical tropical atmosphere. This extremely dry air creates downdrafts of sinking air around a tropical cyclone or one trying to develop, which can weaken the system.

Additionally, strong winds are associated with the Saharan dust plume at a typical height of 6,500 to 14,500 feet above the Earth's surface. These winds can significantly increase the vertical wind shear – the change in wind speed and/or direction with height – which creates a hostile environment for the formation of tropical storms and hurricanes.

The Saharan Air Layer's warmth also acts to stabilize the atmosphere, which can suppress the development of clouds that are needed for tropical cyclones to develop and grow.

While the official Atlantic hurricane season doesn't begin until June 1, the season started early in each of the last seven years. However, this plume of Saharan dust traveling across the Atlantic might finally put an end to that streak since atmospheric conditions will be unfavorable for tropical development for at least the next week.