2022 Oscars: The big winners of the night plus a dramatic confrontation between Will Smith and Chris Rock

FOX 11's Amanda Salas breaks down the highs and lows of the 2022 Oscars plus the dramatic encounter between Will Smith and Chris Rock.

LOS ANGELES - Ariana DeBose made Oscar history Sunday evening, becoming the first openly queer woman of color to win an Academy Award, but the win also made her the second woman to win the prize for playing the same character.

The 31-year-old DeBose won the supporting actress Oscar Sunday for her role as Anita in Steven Spielberg's remake of the classic musical "West Side Story." Looking on as she accepted the prize was actress Rita Moreno, who won an Oscar for playing the same role in the original film in 1961. 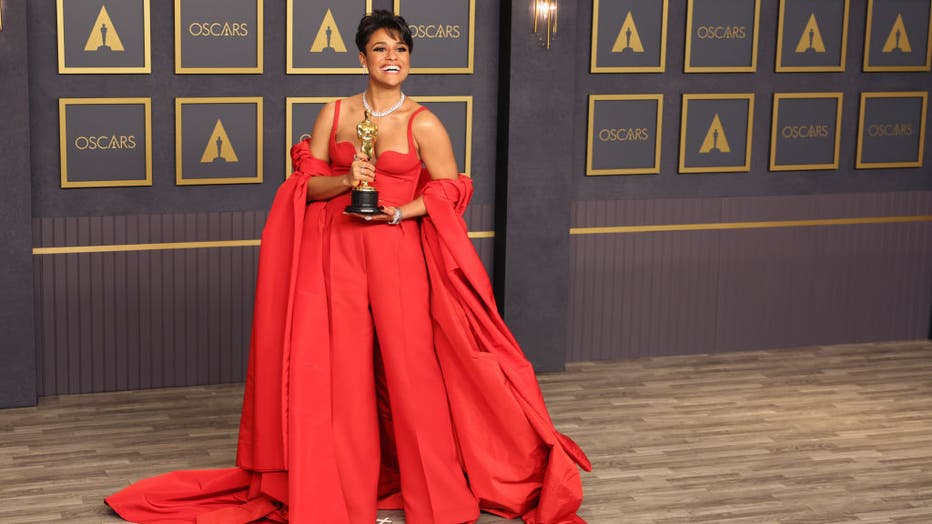 HOLLYWOOD, CALIFORNIA - MARCH 27: Actress Ariana DeBose poses with her Oscar for Best Supporting Actress for 'West Side Story' in the press room at the 94th Annual Academy Awards at Hollywood and Highland on March 27, 2022 in Hollywood, California. (

For DeBose, the win also made her the first openly queer woman of color to win an Academy Award.

"I don't know, it's overwhelming because I could see Rita tonight," she said backstage at the Dolby Theatre. "It was really special to be able to see her sort of willing me to say what I wanted to say. And I think the other layers -- I'm an openly queer woman of color. ... That's freaking awesome, you guys. So I'm the second Latina to win an acting award. I'm Afro Latina. I'm an openly queer woman of color. And I think that just proves that there's space there space for us and it's a beautiful moment to be seen. And I'm really honored by that."

"Ariana DeBose is an immensely talented actress and a tremendous advocate for LGBTQ people and people of color," Ellis said. "She not only made history tonight as the first queer woman of color to win an Oscar, but she sent a beautiful and timely message to LGBTQ young people. I hope LGBTQ youth around the world saw her win, heard her speak and recognize that they too should dream big."

DeBose, a North Carolina native, first broke into the entertainment world as a contestant on the Fox competition series "So You Think You Can Dance." She went on to appear on Broadway, appearing first in "Bring It On: The Musical" and later earning a Tony nomination for her portrayal of Donna Summer in "Summer: The Donna Summer Musical."

She was a member of the ensemble cast of the Disney+ film version of the musical "Hamilton." Last year, she had a supporting role in the Apple TV+ musical comedy series "Schmigadoon!"