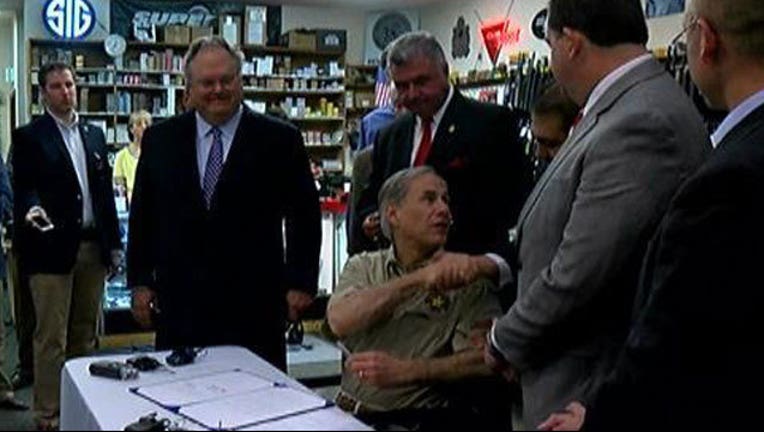 PFLUGERVILLE, Texas - Andrew Clements believes open carry is not a question of a "need" to carry a gun, but a right.

"Both my grandfathers carried an M1 Garand, that's what our forefathers died for," said Andrew Clements, open carry supporter.

He stands outside of Red's Indoor Range, where Governor Greg Abbott signed open carry into law.

It's a law he feels is due to Texans.

"Tyrants believe in disarming citizens. In Texas we don't stand for that," said Clements.

"There's nothing more important in democracy than the voice of the people stepping up and saying that we expect the constitution of the United States of America to be our guiding doctrine," said Abbott.

He also signed the campus carry bill into law. Not everyone agrees with the governor.

"These are not toys, these are tools these are weapons these are dangerous things," said Jonathan Panzer, Executive Director of Texas Gun Sense.

Panzer says it's ok to have a gun, but stricter laws need to be in place to control who has one.

"We're saddened by that fact. We feel like introducing more firearms into a situation creates a culture and an atmosphere of intimidation," said Panzer.

"What they're saying is that somebody in an active shooter situation who has four hours worth of training, who has very little experience with a firearm, can hit their intended target," said Panzer.

"There's over 300 million guns in this country, do they really think a couple pieces of paper is going to change anything? We need education, we need responsible parents," said Clements.

Whether for open carry or against it, the majority of Texans will have one goal in common, and that's keeping its citizens safe.