The City of Austin is hosting a press conference to address the impact of recent severe weather on City of Austin residents, utilities, and services, as well as recovery efforts.

AUSTIN, Texas - Austin Water has partially lifted a boil water notice for its Central, South, North, and Northwest A Pressure Zones. The notice remains in effect for other areas.

Those in the Central, South, North, and Northwest A Pressure Zones no longer need to boil water to drink, cook, and make ice because officials say the water quality meets all regulatory standards in this zone.

Austin Water says in a tweet that by general definition the Central Pressure Zone is: 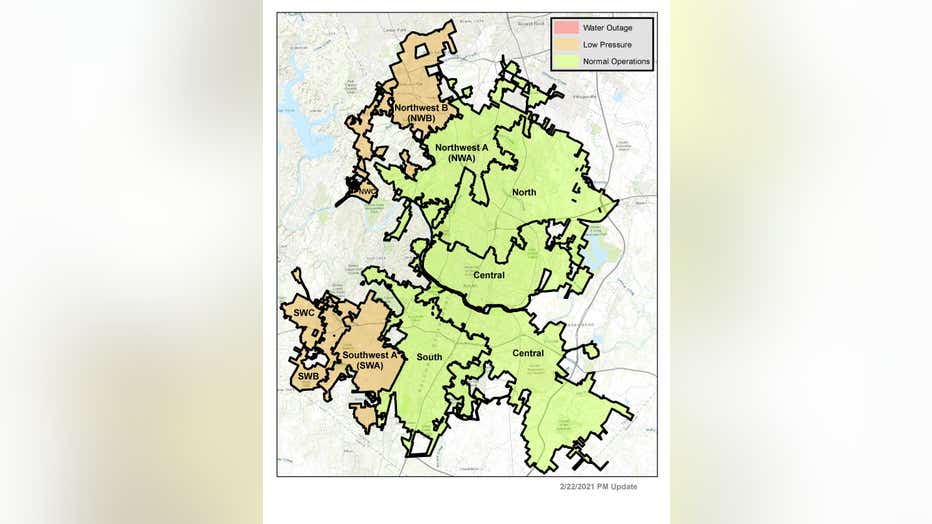 The University of Texas at Austin is in the zone where the notice has been lifted but this afternoon it tweeted that those on campus should continue to boil water and that the university will announce when water is safe to drink.

Below is the updated map from Austin Water on February 22. You can see if the notice has been lifted where you live by clicking here or on the image below. (**NOTE: There have been some intermittent technical difficulties with the map.**)

Officials say those with the notice lifted should flush household pipes, ice makers, water fountains, etc. prior to using for drinking or cooking. Flushing simply means letting the water run to ensure that there is fresh water flowing through your pipes. The are the guidelines officials ask you to follow for flushing:

Austin Water had issued a citywide boil water notice on February 17 due to power loss at the agency's largest water treatment facility.

Residents still under the notice are asked to boil water to a vigorous rolling boil, then boil for two minutes. Instead of boiling, Austinites can purchase bottled water or obtain water from another suitable source for drinking water or human consumption.

Food and water distributed in Austin in wake of winter storm

Volunteers at the Millennium Youth Entertainment Complex distributed food and water to people on Feb 21. Credit: @kipg via Storyful

Children, seniors, and persons with weakened immune systems are particularly vulnerable to harmful bacteria, and all customers under the boil water notice are advised to follow these directions, says Austin Water.

If you're unable to find water at stores, the City of Austin is distributing free water at 10 sites across the city today.