Australia's highest court dismissed the charges of Cardinal George Pell who will be released from Barwon Prison outside Melbourne after serving 13 months of a six-year sentence.

CANBERRA, Australia - Australia's highest court has dismissed the convictions of the most senior Catholic found guilty of child sex abuse.

High Court Chief Justice Susan Kiefel announced the decision of the seven judges on Tuesday in the appeal of Cardinal George Pell. The decision means he will be released from Barwon Prison outside Melbourne after serving 13 months of a six-year sentence.

Pope Francis' former finance minister was convicted by a Victoria state jury in 2018 of sexually abusing two 13-year-old choirboys in a back room of St. Patrick’s Cathedral in Melbourne in December 1996 while he was archbishop of Australia’s second-largest city.

Pell was also convicted of indecently assaulting one of the boys by painfully squeezing his genitals after a Mass in early 1997.

Pell had been ordered to serve three years and eight months behind bars before he became eligible for parole.

The High Court found that the Victorian Court of Appeal was incorrect in its 2-1 majority decision in August to uphold the jury verdicts.

Pell was regarded as the Vatican’s third-highest ranking official when he voluntarily returned to Melbourne in July 2017 determined to clear his name of dozens of decades-old child abuse allegations.

All the charges were dropped by prosecutors or dismissed by courts in preliminary hearings over the years except the cathedral allegations.

Pell was tried on the charges twice in 2018, the first County Court trial ending in a jury deadlock.

Pell did not testify at either trial or at the subsequent appeals. 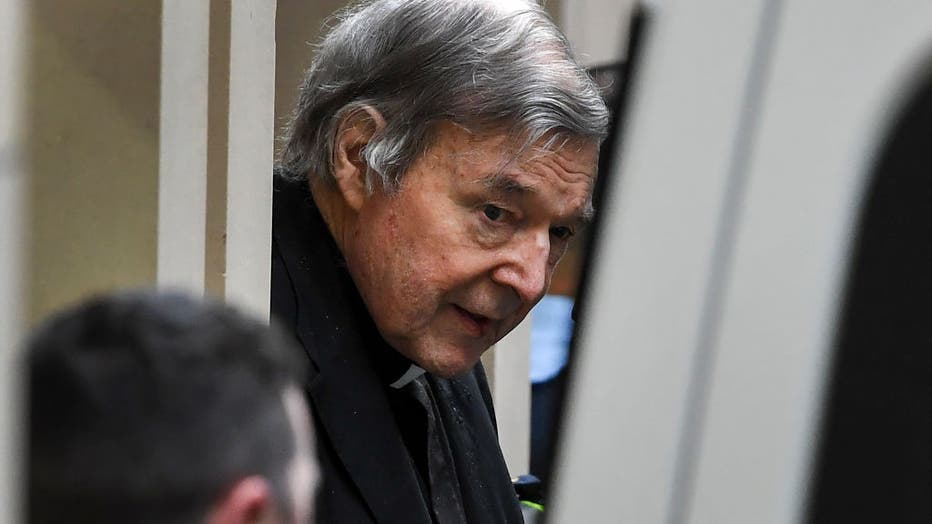 Australian Cardinal George Pell (C) is escorted in handcuffs from the Supreme Court of Victoria in Melbourne on Aug. 21, 2019. (WILLIAM WEST/AFP via Getty Images)

But the juries saw his emphatic denials in a police interview that was video recorded in a Rome airport hotel conference room in October 2016.

“The allegations involve vile and disgusting conduct contrary to everything I hold dear and contrary to the explicit teachings of the church which I have spent my life representing,” Pell read from a prepared statement.

He also pointed out that had had established a world-first compensation scheme for victims of clergy, the Melbourne Response, months before the crimes were alleged to have occurred.

Pell was largely convicted on the testimony of one of the choirboys, now in his 30s with a young family.

He first went to police in 2015 after the second victim died of a heroin overdose at the age of 31. Neither can be identified under state law.

Director of Public Prosecutions Kerri Judd told the High Court last month that the surviving choirboy’s detailed knowledge of the layout of the priests’ sacristy supported his accusation that the boys were molested there.

Pell’s lawyers argued that Pell would have been standing on the cathedral steps chatting with churchgoers after Mass when his crimes were alleged to have occurred, was always with other clerics when dressed in his archbishop’s robes, could not have performed the sexual acts alleged while wearing the cumbersome garments and could not have abused the boys in the busy priests’ sacristy without being detected.

Much of the two-day hearing focused on whether the jury should have had a reasonable doubt about Pell’s guilt and whether he could have time to molest the boys in five or six minutes immediately after a Mass.

The appeals court found in a 2-1 majority in August that Pell had had enough time to abuse the boys and that the unanimous guilty verdicts were sound.

Judd said the “two big points” raised by Pell’s lawyers against the prosecution case were evidence that Pell had been chatting with members of the congregation on the steps of the cathedral after the Masses when the abuses could have occurred and that he only had windows of five or six minutes to commit the abuses undetected.

Pell’s lawyer Bret Walker told the High Court that all that the prosecution had to do at his trial and appeals court hearing was to prove that Pell being left alone while robed or not talking with congregants after Mass was “possible” to prove guilt beyond reasonable doubt.

“That ... is a grotesque version of the reversal of onus of proof, if all the Crown has to do is to prove the possibility of something,” Walker said.

Judd argued that the charges were proved beyond reasonable doubt.

“The High Court found that the jury, acting rationally on the whole of the evidence, ought to have entertained a doubt as to the applicant’s (Pell’s) guilt with respect to each of the offences for which he was convicted,” the court said in a statement.