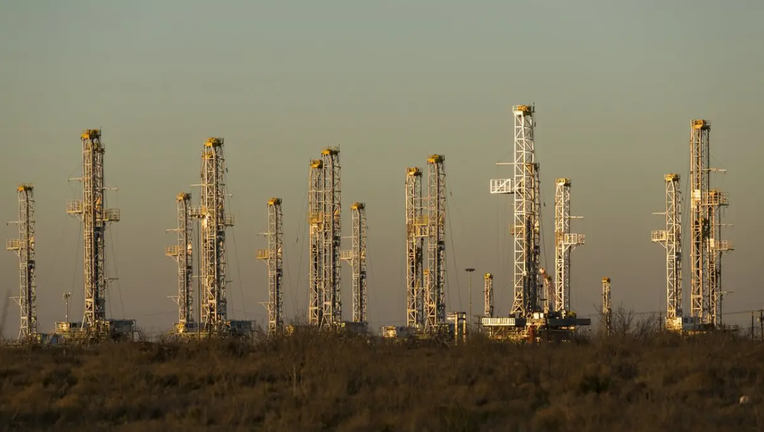 Dozens of stacked oil drilling rigs sit in a yard just north of Interstate 20 between Midland and Odessa.  (Credit: Jerod Foster for The Texas Tribune)

Federal regulators are flying over large stretches of Texas looking for "super-emitters" of methane, the U.S. Environmental Protection Agency announced this week.

The helicopter flyovers surveying thousands of oil and gas operations in the Permian Basin region of West Texas and southeastern New Mexico began Monday and will continue through Aug. 15. The flyovers will allow the agency to identify emitters of large amounts of methane and excess emissions of volatile organic compounds, or VOCs, according to a news release.

The Permian Basin — which includes the cities Odessa and Midland — accounts for 40% of the nation’s oil supply.

The region has produced large quantities of methane and VOCs over the years, which contribute to climate change and poor air quality, Region 6 Administrator Earthea Nance said.

Methane is a greenhouse gas, so its presence in the atmosphere affects the earth’s temperature and climate system, according to the agency. Methane is released during the drilling of oil wells and can be leaked from oil and gas equipment, as well as being emitted from natural sources.

VOCs, which are also found in thousands of household items, can cause short- and long-term health effects such as eye, nose and throat irritation; loss of coordination and nausea; headaches; and damage to the liver, kidneys and central nervous system, according to the EPA. Some can cause cancer in animals, while others are suspected to cause cancer in humans.

During flyovers, the agency will use infrared cameras to detect hydrocarbon emissions, according to the release. Once those emissions are detected, a technician on board the helicopter will note the time, GPS location and other information about the emission’s source. The agency will use that information to identify the facility releasing the excess emissions and follow up with facility operators.

The agency plans to address noncompliance with significant penalties and referrals to the Department of Justice. It plans to monitor violators to verify that they are taking corrective action to address excessive emissions.

Reducing methane emissions is a top priority in the Texas oil and natural gas industry, Todd Staples, president of the Texas Oil and Gas Association, said in an email statement.

Efforts to identify and lower emissions have been a "great success" thanks to companies' investments in technologies such as handheld optical imaging cameras, drones, flyovers, leak detection and repair techniques and the replacement of pneumatic valves with zero-emission pneumatic controllers, Staples said. He added that methane emissions intensity in the Permian Basin has declined by nearly 70% since 2011.

Last fall the EPA proposed tighter controls on the oil and gas industry’s emissions of methane, one of the most potent greenhouse gases that causes climate change. And the federal department is considering whether to impose tougher rules on certain counties in the basin.

The agency’s announcement of flyovers came four days after The Associated Press published an investigation that showed 533 oil and gas facilities in the region are emitting excessive amounts of methane. An agency spokesperson told the Washington Post that the timing of the announcement was not related to AP’s story and that similar flights had been conducted in previous years.