Toxic chemicals called PFAS found in half of US cosmetics tested

Researchers at the University of Notre Dame tested more than 230 commonly-used cosmetics from top brands.

It found that middle-aged women with the highest blood concentrations of PFAS were 71% more likely to develop high blood pressure than their peers with lower levels of such substances.

What are ‘forever chemicals?’

PFAS, called "forever chemicals" because they last so long in the environment, are used in thousands of everyday household items, such as certain shampoo, dental floss, cosmetics, non-stick cookware, food packaging, stain-resistant coatings for carpeting, upholstery, and clothing, according to the U.S. Environmental Protection Agency.

These long-lasting chemicals also enter the food system through fish caught in contaminated water and dairy products from cows exposed to PFAS through fertilizers on farms, the researchers noted.

A study published last year found that more than half of cosmetics sold in the U.S. and Canada contained fluorine — an indicator of PFAS. Researchers at the University of Notre Dame tested more than 230 commonly used cosmetics and found this to be true for 56% of foundations and eye products, 48% of lip products and 47% of mascaras.

Furthermore, nearly all people tested in the U.S. have detectable concentrations of at least one PFAS in their blood, according to previously published data from the National Health and Nutrition Examination Survey.

Researchers at the National Atmospheric Deposition Program, say they have have found high levels of  toxic chemicals known as PFAS in rainwater, in some parts of the U.S.

Some of these chemicals in the environment have been associated with serious health conditions, including cancer and reduced birth weight. However, no previous studies have evaluated whether PFAS levels affect blood pressure control among middle-aged women, the researchers noted.

"Women seem to be particularly vulnerable when exposed to these chemicals," study lead author Ning Ding, Ph.D., M.P.H., and post-doctoral fellow in the department of epidemiology at the University of Michigan School of Public Health, said in a statement. "Our study is the first to examine the association between 'forever chemicals' and hypertension in middle-aged women. Exposure may be an underappreciated risk factor for women's cardiovascular disease risk."

In the new study, researchers from the University of Michigan School of Public Health and elsewhere analyzed blood concentrations of seven PFAS and the risk of high blood pressure. It included more than 1,000 middle-aged women enrolled in the Study of Women's Health Across the Nation-Multi-Pollutant Study.

The women – who were Black, Chinese, Japanese or White – were recruited from health institutions in Boston, Pittsburgh, southeast Michigan, Los Angeles and Oakland, California. They ranged in ages between 45 and 56 years old and had normal blood pressure when they enrolled in the study, researchers said.

Blood concentrations of PFAS were measured at the start of the study, and all participants were followed almost annually between 1999 to 2017.

Women in the highest one-third concentrations of all seven PFAS examined had a 71% increased risk of developing high blood pressure, the study found.

"It's important to note that we examined individual PFAS as well as several PFAS together, and we found that the combined exposure to multiple PFAS had a stronger effect on blood pressure," study senior author Sung Kyun Park, Sc.D., M.P.H., said in the statement. "Some states are beginning to ban the use of PFAS in food packaging and cosmetic and personal care products. Our findings make it clear that strategies to limit the widespread use of PFAS in products need to be developed."

The study was limited in that it only included middle-aged women, so the findings may not translate to men or to younger or older women. It was funded by the National Institutes of Health. 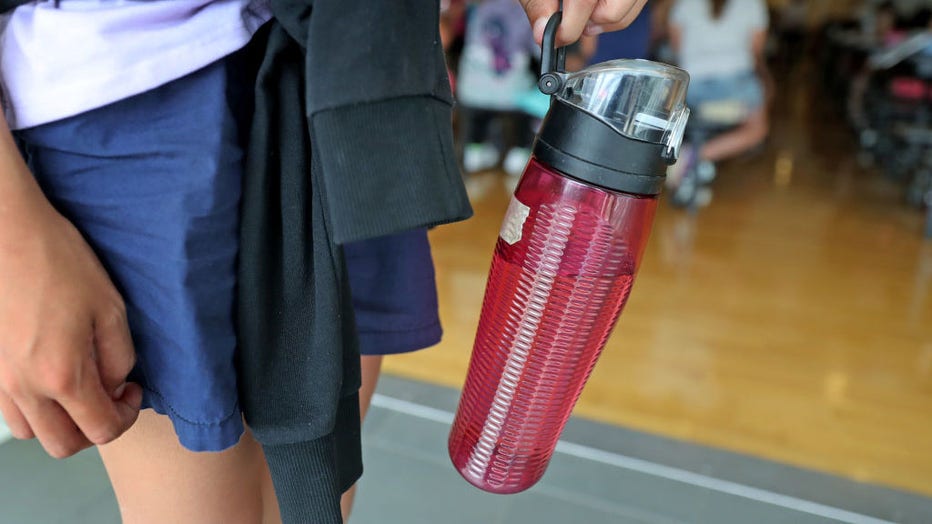 FILE IMAGE - A student holds a reusable water bottle at Center School in Stow, Massachusetts, on Sept. 4, 2019. Center School and another Stow school shut off water fountains and moved food prep off-campus after elevated levels of per- and polyfluoro

In late 2021, the EPA launched a broad strategy to limit pollution from these "forever chemicals" increasingly turning up in public drinking water systems, private wells and food.

The Defense Department said would work to assess and clean up PFAS-contaminated sites throughout the country, while the Food and Drug Administration expanded testing of the food supply to estimate Americans’ exposure to PFAS from food. The Agriculture Department also said it would boost efforts to prevent and address PFAS contamination in food.

The series of actions, announced in October, is intended to restrict PFAS from being released into the environment, accelerate cleanup of PFAS-contaminated sites such as military bases and increase investments in research to learn more about where PFAS are found and how their spread can be prevented.

"This is a bold strategy that starts with immediate action" and includes additional steps "that will carry through this first term" of President Joe Biden, EPA head Michael Regan said in a previous interview with The Associated Press.

"We’re going to use every tool in our toolbox to restrict human exposure to these toxic chemicals.″