The family has sent several letters to the city asking for help but the city said the problem was created because the house was built on a natural drainage slope.

LAGO VISTA, Texas - Chickens located in a Lago Vista backyard have to run for higher ground every time a big rain rolls through.

They are owned by Tiny Freeman who lives on Crystal Way Road. "We moved the chickens over here thinking maybe we could get them out of the flood zone, but that didn't work," said Freeman.

The chickens survived the storm that hit Wednesday morning, but the debris that washed into Freeman's yard damaged her fence again.

"It is not as bad as I've seen it before, the worse that I've seen before is that you could probably put a kayak in my yard and ride it through my yard," said Freeman.

That's what happened in May. Stormwater rushed into Freeman's yard and the high water wrapped around her house, essentially making it an island. "There is not a foot of yard that wasn't flooding when we get really bad downpours like that," said Freeman.

The water comes from two shallow drainage ditches located across Crystal Way Road. Freeman provided FOX 7 Austin a picture of how the problem area was still full of water after a recent storm moved out.

"I don't sleep now because of the flood water issues we've had, I have trouble sleeping at night because I'm coming out making sure my garage isn't being flooded or my chickens are not being flooded out because they have to sit at the top of their house when the floodwaters are coming through," said Freeman.

After the flood in May, the city cleared a drain pipe. It is connected to the ditch that runs under the road and under Freeman's driveway.  It comes out next to the house. But all that has done is create a water cannon effect and a bigger erosion problem. 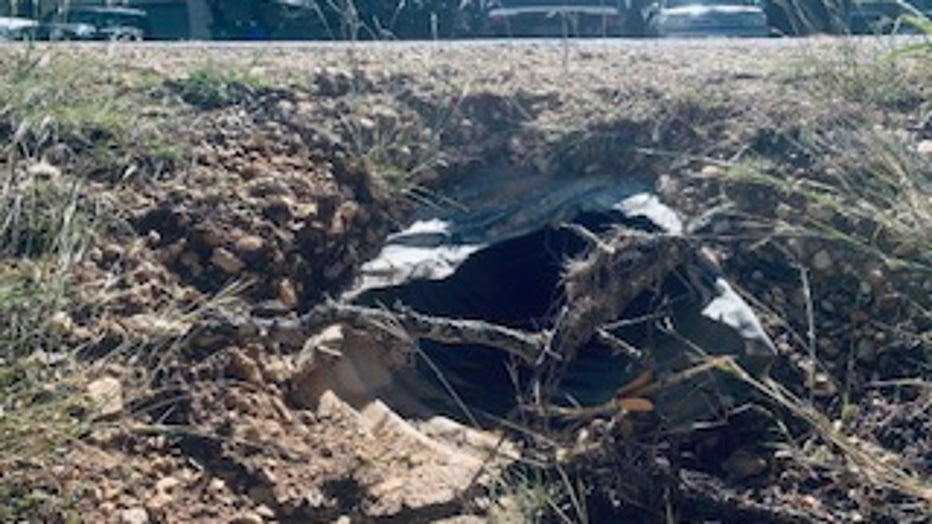 The family has sent several letters to the city asking for help but the city said the problem was created because the house was built on a natural drainage slope.

Freeman has sent several letters to the city public works department asking for help but the city said the problem was created because the house was built on a natural drainage slope.

Her suggestion of digging out the ditches, to redirect the stormwater, wasn't accepted. "The response was, do I want to flood my neighbors? and I said no, I want the drain to flow properly so none of us are flooded and we could share the load of this issue," said Freeman.

Freeman believes along with the ditch repair, most of her flooding problem could be solved if the city cuts a new drain line. It would cross the street where the two ditches meet and flow down the hill along her property line.

Freeman says she is even willing to share the cost, in order to extend the new drainage ditch through her backyard along the fence line. "I wanted them to do the right thing and work with me," said Freeman.

For her, it is a fix so she can sleep at night, and her chickens won't drown.

Wednesday afternoon, Lago Vista City Manager Tracie Hlavinka responded to an earlier request for information. Hlavinka stated it is the first time that she is hearing about the problem and that she was going to look into what’s going on.