A lawyer for the far-right Oath Keepers extremist group has been charged with conspiracy in connection with the Jan. 6, 2021, attack at the U.S. Capitol, authorities said Thursday.

Kellye SoRelle — general counsel for the antigovernment group — was arrested in Texas on charges including conspiracy to obstruct the certification of President Joe Biden’s electoral college victory, the Justice Department said.

SoRelle, 43, is a close associate of Stewart Rhodes, the Oath Keepers’ leader who is heading to trial later this month alongside other extremists on seditious conspiracy charges.

After Rhodes’ arrest in January, SoRelle told media outlets she was acting as the president of the Oath Keepers while he’s behind bars.

Prosecutors have accused Rhodes and his militia group of plotting for weeks to stop the transfer of power and keep former President Donald Trump in office, purchasing weapons, organizing military-style trainings and setting up battle plans.

SoRelle told The Associated Press last year — when FBI agents seized her phone as part of the Jan 6. investigation — that she had no knowledge of or involvement in the Capitol breach. She called the seizure of her phone "unethical" and the investigation "a witch hunt."

She is expected to make an initial appearance in federal court in Austin, Texas, later Thursday and it wasn’t immediately clear if she has an attorney to speak on her behalf.

SoRelle was photographed with Rhodes outside the Capitol on Jan. 6 and was present at an underground garage meeting the night before the riot that’s been a focus for investigators. 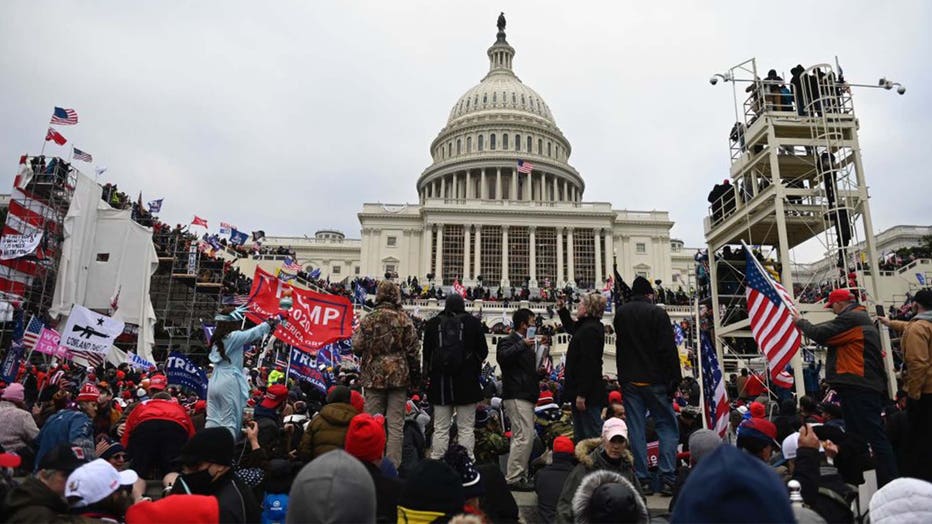 The meeting included Rhodes and and Enrique Tarrio, the former chairman of the Proud Boys, who is charged separately with seditious conspiracy alongside other members of the extremist group that describes themselves as a politically incorrect men’s club for "Western chauvinists."

Publicly released video of the meeting doesn’t reveal much about their discussion and prosecutors have said only that one of the meeting’s participants "referenced the Capitol."

SoRelle was also on a call with Rhodes and other Oath Keepers days after the 2020 election during which Rhodes rallied his followers to prepare for violence, according to a transcript made public in court.

SoRelle is also charged with obstruction of an official proceeding, obstruction of justice for tampering with documents and a misdemeanor charge for entering Capitol grounds. The indictment says she persuaded others to destroy and conceal records sought by investigators.

SoRelle told the AP last September that agents seized her phone and provided her a search warrant that said it was related to an investigation into seditious conspiracy, among other crimes. The indictment against SoRelle made public Thursday does not include a charge of seditious conspiracy.

Rhodes and four co-defendants scheduled to go on trial starting Sept. 26 have said there was no plot to attack the Capitol and that their communications in the run up to Jan. 6 were about providing security for right-wing figures such as Roger Stone or preparing for attacks from left-wing antifa activists.

Rhodes, a former U.S. Army paratrooper, founded the Oath Keepers in 2009. The group recruits current and former military, police and first responders and pledges to "fulfill the oath all military and police take to defend the Constitution against all enemies, foreign and domestic."

A slew of its members have been charged in connection with Jan. 6. Three Oath Keepers have already pleaded guilty to seditious conspiracy, a rare Civil War-era charge that’s historically been hard to prove. They are also cooperating with the Justice Department.